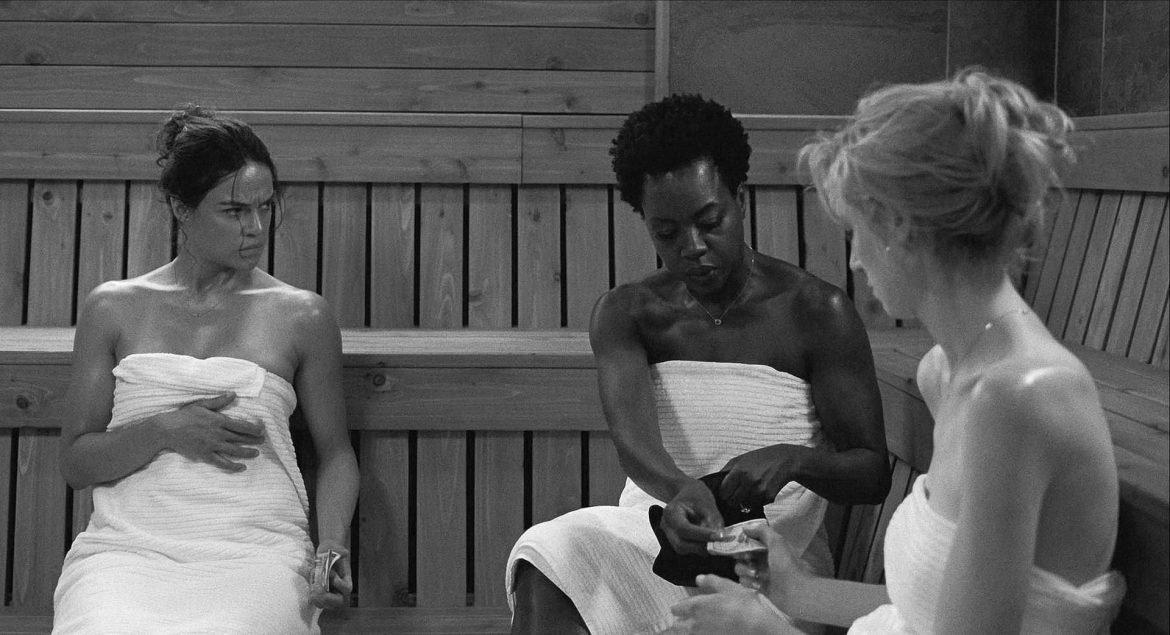 Steve McQueen rounded up a star-studded cast for this politically charged, gritty action film. Photo courtesy of the Guardian.

The heist movie genre is extremely popular and salient in pop culture, and for great reason: the tropes are well-known and obvious, and if a movie utilizes them well, it will be greatly celebrated. The 2001 remake of Ocean’s Eleven is perhaps the pinnacle of this feat and it remains extremely popular more than 20 years later. However, most heist movies are presented as screwball comedies that do not account for the broader context in which their characters live and work. This makes sense, because creating an immersive world for a singular movie may feel unnecessarily time consuming. However, the best heist films are able to have their cake and eat it too – combining the pulpiness of boilerplate heist flicks with the character-driven tension and meticulous world-building of a regular drama. Widows, which played at Images from Nov. 16 through 29, was able to successfully combine these two traits, and as a result is one of the best films of 2018.

Directed by Oscar winner Steve McQueen, Widows stars perhaps the best film cast of this decade — the titular widows are played by Viola Davis, Elizabeth Debicki and Michelle Rodriguez. Supporting actors include dynamic talents such as Daniel Kaluuya, Brian Tyree Henry, Liam Neeson, Cynthia Erivo, Colin Farrell and Robert Duvall. The film entered theaters with heavy anticipation, and the movie warrants almost every bit of it. Heat, Michael Mann’s 1995 drama, is perhaps the foundational text of McQueen’s film; however, Widows is a social commentary that comments on many aspects of modern life, whereas Heat is a self-contained character study.

There are many ways in which McQueen’s thoughts are communicated throughout the film, but none is more powerful than a tracking shot, which follows a car carrying Jack Mulligan (Farrell) directly from a destitute black neighborhood to a high-toned area with an abundance of brick mansions in the span of about three minutes. This scene is so packed with commentary that it probably warrants an article all its own, but suffice it to say that McQueen really pokes holes in the “out of sight, out of mind paradigm” – we aren’t as far apart from each other as it may seem. Additionally, there is an added layer of significance when you remember that Mulligan is running for office in the neighborhood he just left, yet lives in a leafy area that – while technically a part of the ward he seeks to represent – stands in stark contrast to its overwhelming demographic. Mulligan lives with his assumed people, but he does not live among them – a point that Jamal Manning (Henry), his opponent, makes right to his face.

This scene is perhaps the high point of the film, but is far from the only memorable moment; the film is all-consuming and immersive. We immediately feel enmeshed in this not-very-fictional world, whether it’s through watching the destructive relationship between Alice (Debicki) and her husband or sympathizing with Linda (Rodriguez) as she learns that her tailoring shop will be closed down in the wake of her husband’s passing. Not many heist films provide real-world stakes to their characters outside of an inevitable large sum of money, so the fact that Widows makes its central heist an almost necessary achievement for its protagonists places it a cut above the competition.

But lest we forget, there’s also plenty of political and social commentary in Widows that is much more straightforward. McQueen creates class and racial differences among the trio of widows and Belle (Erivo), their heist teammate, though he inverts the expected stereotypes here. Veronica (Davis) is the rich woman in this scenario and is quite condescending and dismissive towards Alice, a poor white woman, and Linda, a working-class Latina, for most of their time on screen together. Their relationship ends on better terms, but unlike in many heist films, these women do not stay involved in each others’ lives afterwards. Here, McQueen reminds us once more of the final thesis of the beloved high school movie The Breakfast Club; at our core, all of us are just merely filling roles in the ecosystem of society. Once they are established, breaking out of these roles is a nearly impossible task, both because of our own wants and needs and because the continued functioning of the social order requires us to stay rooted in our original positions. The movie ends with a shot of Davis and Debicki at a diner, but they are not eating together; their simultaneous presence is a mere coincidence. Even if they wanted to stay friends, the differences between the widows are too vast to be realistically bridged. This is real life, and while it may be unfair, that’s how it is.

Widows is uproariously funny in addition to being an incredibly timely social commentary. There are twists and turns, character drama and plenty of action – and something for every type of movie fan. I’d recommend everyone to see it should they have the chance.