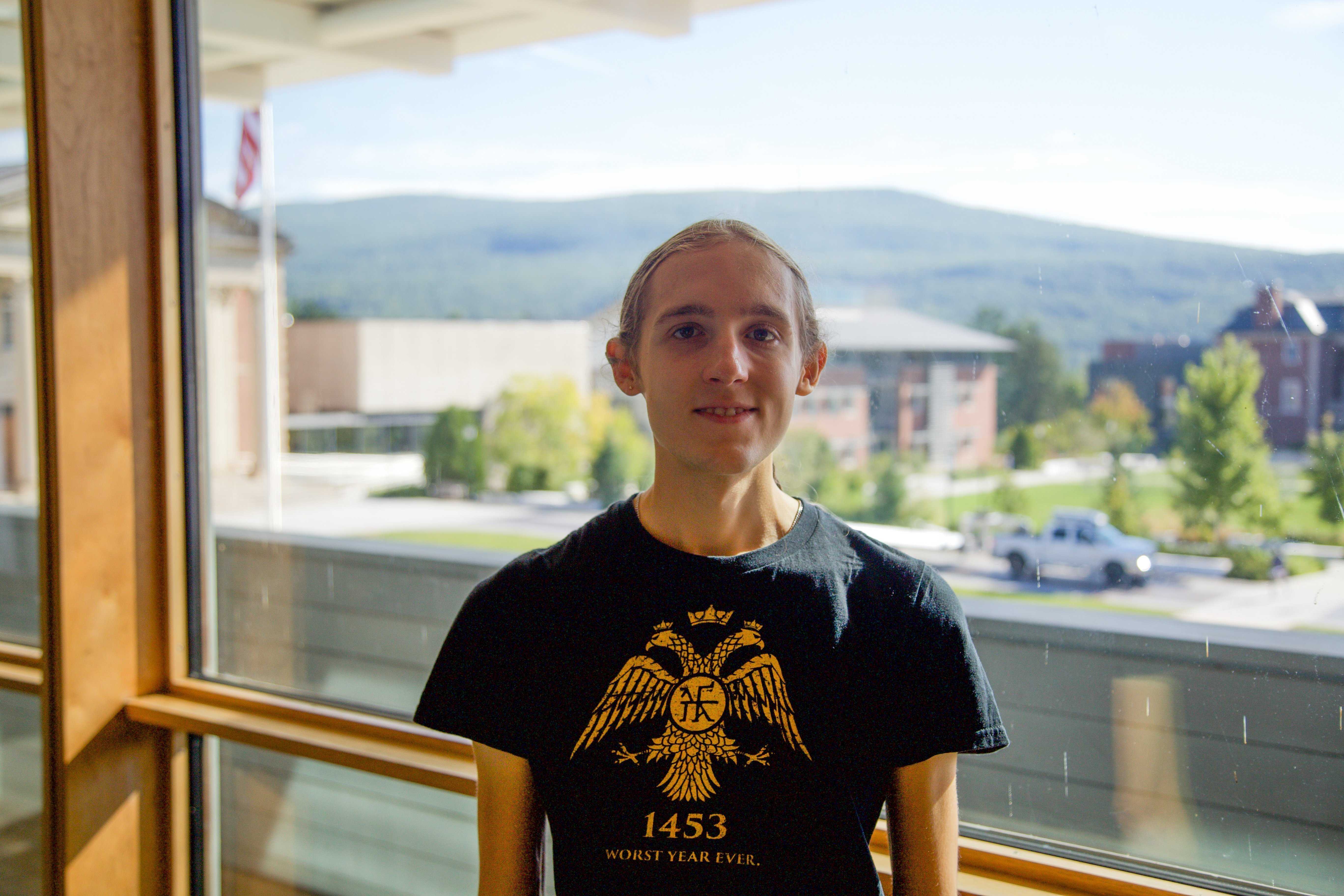 I first met Robbie through our mutual friend, Natalie Newton ’20, and I was thrilled to have met another tea aficionado. Upon parting ways from that first encounter, Robbie told me, “I’ll sacrifice a goat for you.” The rest is history. I sat down with Robbie the other day to discuss his tea-drinking habits, his flag-sewing stories and his concerning winter apparel.

Robbie, you’ve told me multiple times when I was stressed that you’d sacrifice a goat for me. Thank you for that. How did you start using this phrase?

It started among my high school friends as a way of thanking someone. Saying that you’d sacrifice a goat to a pagan deity or god brings them good fortune, like wishing them well on a journey. I don’t know exactly the context it arose from, but then it just became a thing and developed a life of its own. It became a useful phrase and then a part of my character. A lot of people, who I’m pretty sure don’t even know my name, just know that I’ll sacrifice a goat for them.

That’s beautiful. Can you share some other goat-related stories?

The summer between freshman and sophomore year [of college], I was an intern for my local historical society. It had a goat yoga program where people would come and pay to have a yoga class where goats would be placed on their back. I had four duties: making sure the goats didn’t escape, taking the money from the people, placing baby goats on their backs – that was my favorite part  – and, my least favorite part, picking up the goat poop. Yeah, it was a weird, awesome experience. I did get to bottle feed one of the baby goats. That was the highlight of my summer. It was wearing a diaper too, because it was six days old. It was adorable; my heart melted.

My heart is melting too. Don’t you sew as well? What’s your favorite thing you’ve made?

Yeah! It’s one of my favorite hobbies. My favorite thing is the M3 flag I decided to make for the entry. I made this decision in October. It took me until literally the last entry snacks to finish it. I actually timed it on my phone; every time I would pick up the thing to start sewing, I would turn on a stopwatch on my phone. And it took me 284 hours. It’s two alpacas on each side with M3 in the center. Oh god, that one was painful.

Did you sew a flag last year?

Yes, because I am a masochist and thought it would take a lot less time than it did. It’s actually the flag of the Palaiologos family, the last Byzantine emperors. I’m probably slaughtering the name. Also, they have the coolest of all symbols. I used over a mile of yellow thread. It’s currently hanging on the inside door of my room in Bryant.

[Shows Byzantine flag.] That’s amazing! Is flag-sewing connected to the flags you hung outside your window of Morgan last year?

Yeah, I have a thing for flags. I love history, and flags are a way of showing it. I wanted something to decorate the inside of my walls with, and flags are like $5 on Amazon. So, I just got a few command hooks and put up the flags. But I got too many flags for command hooks, and I was living on the top floor, so I was like, “Hey, it would be cool if I flew a flag out there.”

What flags do you have?

I have like 18 or 19 flags. I have a few common ones, like the British flag and the Scottish flag. I also have the imperial Russian flag, the flag of the Kingdom of Prussia, the flag of the Austro-Hungarian Empire, the banner of Edward III, the flag of Wales, a nice dragon, the flag of the Qin dynasty from China and a lot more.

Did you always know you wanted to major in history and classics?

I actually came here wanting to be a chemistry major. That was the worst decision of my life. It crashed and burned so badly. My first history class was “Islamic Law,” and I really enjoyed that. Then I took Professor Chris Waters’s “Europe in the 20th Century” and now I’ve snowballed from there. [This summer] I was in Bulgaria, excavating a Byzantine monastery occupied from the early fifth to late seventh century, and it had a reliquary that contained the bones of an unknown saint. I’m studying in Greece next semester; the plan is Athens.

Alright, Robbie, let’s switch over to beverages now. How many cups of tea do you drink a day?

Ah yes, the infamous topic. It was more extreme last year. There was this one period of two weeks where I went a bit nuts on an anthropology final paper because I really enjoyed the course, and I was researching artifacts from Teotihuacan in Mexico. I wrote a 135-page paper, and I wrote the bulk of it in a two-week period with other coursework going on. I got three hours of sleep per night on average. But also, caffeine doesn’t affect me much; it was more the warmth going into my body and the ritual that calmed me and helped me deal with that massive stress. I drank 19 cups of tea in one day. And during that period, it was like 11 to 14 cups on average. Now it’s closer to seven or eight a day.

Do you drink coffee at all? Jessica [Thompson ’21] told me you’ve eaten raw coffee beans before?

Only  when I need it. Basically, this was also because of freshman year chemistry. The dining hall opens at 7:30 a.m., I had a class in Science Quad at 8 a.m. and I needed a lot of caffeine to stay awake during said class. I can only drink so much liquid in such little time, and I can’t afford to have to pee in class because I’m bad enough at chemistry as is, and I can’t just walk out. So, I bought on Amazon a 10-pound bag of coffee beans. I would have about 100 coffee beans a day, which was about 10 cups worth, most of them first thing in the morning right after I woke up. And yeah, horrible idea. The stomach cramps were intense. One time I literally thought I was having a stroke. It was my biggest freshman year blunder. That and whipped cream.

What happened with whipped cream?

I had an addiction to whipped cream. I would literally have a bowlful of whipped cream from the dining hall. And I would do that multiple times a day, which is ironic, because now I’m effectively vegan, and I don’t eat any dairy products. I’ve changed a lot since freshman year [laughs.]

Robbie, you can often be found studying standing up in Upper Paresky, right?

There are a few health benefits, but mainly for me, I have very low blood pressure, so when I stand up I get dizzy very quickly, and if I sit down for too long I get very tired, so standing is just more comfortable for me. I stay awake longer and feel more alert. And actually, over the course of a year, I’m not sure if this is true, but I’ve heard standing for eight hours a day is equivalent to running about five marathons.

Because I like kilts? It’s hard to think of an exact reason why, I usually answer with “Why not?” It’s a nice day, and I feel like wearing a kilt. My mother actually got it for me for Christmas last year; she’s been trying to convince me to get a kilt for the past three years, and I finally relented and said sure, that would make a great Christmas gift. I’m only tangentially Scottish, so I sort of have a right to wear it by descent? Not really, just enough to justify it. I think it’s a Black Watch tartan, which was a military regiment in Scotland, and I have no relation to it whatsoever, it just looked cool. It was a good decision.

That sounds like a very good decision. Finally, I’ve heard that you’ve gotten hypothermia a couple of times?

That’s another one of those freshman year things. I wore shorts and a T-shirt every day until the end of March freshman year. No jacket, nothing. I would wear gloves but fingerless. It started in middle school, because the people who ran the school and controlled the heating were absolute sadists. They would heat the school to about 80 degrees during the middle of the winter. It made no sense. I just didn’t own pants. So yeah, I just wanted to keep doing that over here, and through sheer willpower I made it through, but I did get hypothermia a few times. It was not pleasant. I stopped feeling cold at that point, which I knew was a problem. It was Williamstown weather, so being in 10 degrees for about an hour did it.

Robbie! Do you have a coat and pants now?

Now I actually get cold really easily, which is part of the reason why I drink so much tea. I bought sweatpants on clearance at the Williams store, and I own a lot of pants.