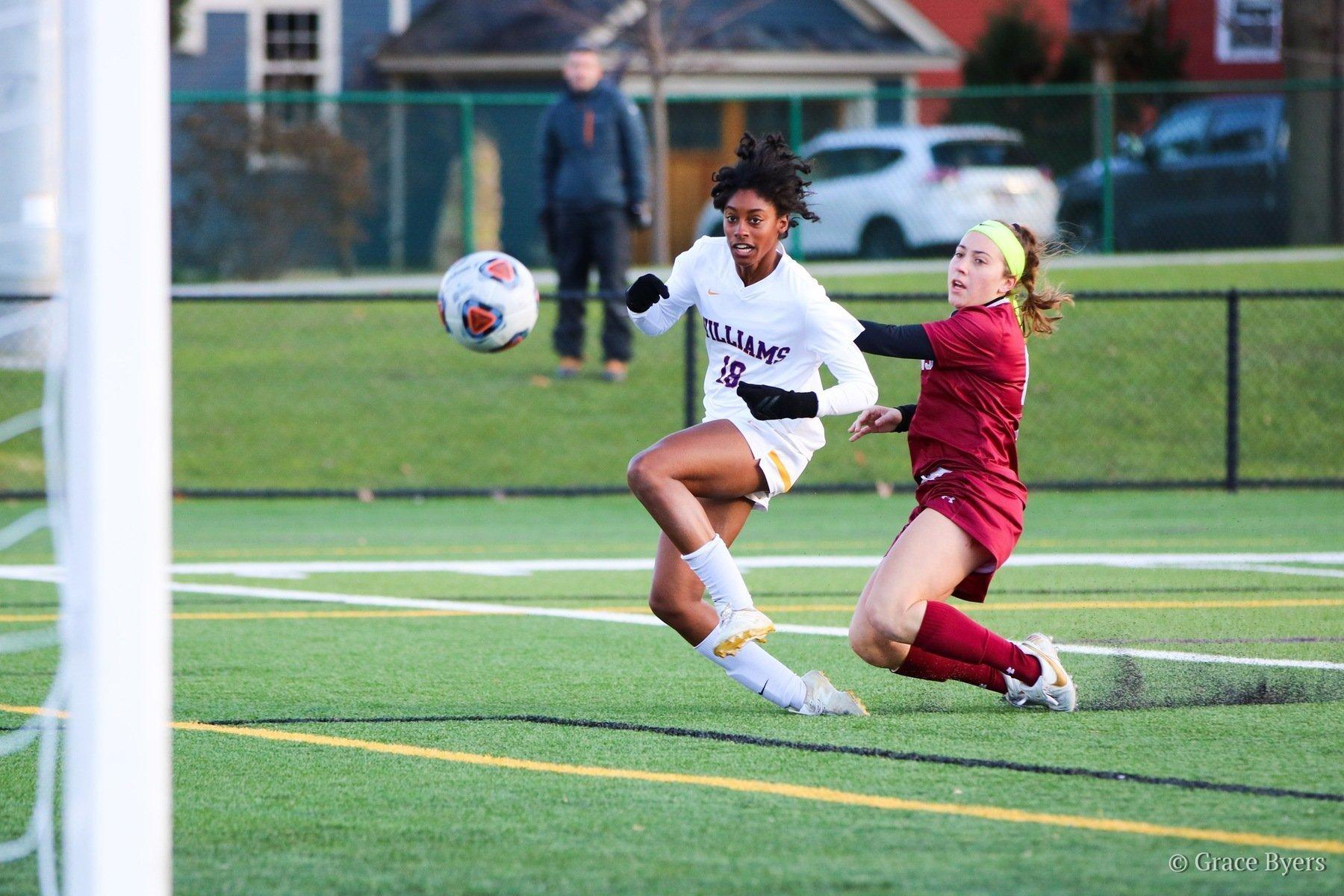 Sydney Jones ’21 scored the game-winning goal against Stevens Institute of Technology in the 83rd minute to advance the Ephs to the Sweet 16. Photo Courtesy of Sports Information.

No. 5 women’s soccer (17-1-2, 9-0-1 in the NESCAC) advanced past the first and second rounds of the NCAA Div. III tournament this weekend, defeating the University of New England 2-0 and mounting a furious comeback to edge Stevens Institute of Technology 2-1.

On Saturday, Williams won 2-0 against the University of New England, bouncing back from the women’s first loss of the year against No. 3 Middlebury in the NESCAC finals.

Against the Nor’easters,  the Ephs dominated the turf, posting 12 shots on goal while allowing zero in return. In the first half, the fresh-faced duo of Liz Girvan ’22 and Brianna Binder ’22 helped to give the Ephs a 1-0 lead. Liz Webber ’20 padded the lead in the 53rd minute, scoring off a corner.

Head coach Michelyne Pinard explained some of the obstacles the team overcame. “There’s always a unique challenge when you play the first game of an NCAA Tournament,” she said. “With the wind, a surface we’re not completely comfortable on yet and lots of other challenges, I thought our team handled them all great. I thought we played incredibly well and moved the ball.”

In the 29th minute, Girvan sent a pass into the goal box, hoping to find Binder. New England goalie Jenna Pannone sprinted forward to slide on the ball, but the ball came loose, leaving the goal exposed. Binder pounced on the chance, cutting right and scoring through the legs of her defender, putting the Ephs up 1-0 as well as netting her first collegiate goal.

Williams extended their lead in the 53rd minute, with Aspen Pierson ’21 serving the ball into the goal box off a corner. Webber scored after Sarah Scire ’20 deflected the ball back to her.

A corner kick in the 78th minute was the extent of the Nor’easters offense against a stellar Eph defense. Centerback Maria Chapman ’22 corralled any ball that happened to wander past midfield.

The one bright spot for New England was Pannone, who finished with a career-high 10 saves. Eph goalie and tri-captain Olivia Barnhill ’19, helped by the team defense, finished with no saves while posting the clean sheet.

Sydney Jones ’21 continued to be a spark-plug for the Eph s’ offense, finishing with three shots on goal. Her speed also created space near the goal line, forcing several corner kicks, one of which resulted in Webber’s goal.

On Sunday, the Ephs staged a two-goal comeback in the final 18 minutes to eliminate Stevens Institute of Technology in the second round of the tournament.

In the 49th minute, the Ducks’ Julia Panko delivered a corner kick into the heart of the box, where Brynn Budka struck the ball off the cross bar, Misha Brewster shot on goal,and Ally Wanzor finally put the ball in the back of the net.

During an injury break, the Ephs, trailing 0-1, regrouped and made adjustments. “We made a slight tweak to our shape and asked them to play our game,” Pinard said. “We hadn’t really played with the intensity and the urgency that we were capable of.”

In the final 18 minutes, the Ephs roared to life. Bruising runs from Jones created chances on the flank. Stellar defense in the backfield closed off any offensive lanes for the Ducks. And in the 73rd minute, the Ephs forced a corner and equalized.

Pierson took the corner, curving the ball into the back of the box, where Sarah Kelly ’19 dished it back to the left side. Georgia Lord ’21 blindsided the defense and scored to even the match 1-1.

“As soon as we put the ball in the back of the net, we knew that we could win the game,” Barnhill commented.

In the 83rd minute, Jones broke the tie in a breakaway to put the women on top for good, 2-1.

For Jones and the Ephs, come-from-behind efforts are free-flowing and, most importantly, natural. “In the moment, I didn’t think about what would happen if I scored or if I didn’t,” Jones said. “I find it really helpful in moments in the game that are extremely important to not think about anything and, rather, try to play in the moment and enjoy the game. It’s the only way to perform well under pressure, and it’s the only way to have fun.”

During the comeback, Williams struck five shots on goal and earned three corner kicks. Jones recalled the Ephs’ dominant finish to the game. “During [the injury break], Olivia Barnhill said a few words that I think inspired everyone,” she said. “In summary, she said that if we played our best soccer and walked away losing this game, she would be okay with that. But she felt that there was another level that we [had] yet to reach, and that it was only if we reached that level did we have a chance of winning. We all agreed that we owed it to ourselves to reach that level of soccer, given that it is what we have been working on all year, and how much we believed that it could in fact be reached. After talking, I think I can speak for everyone in saying that there was a shift in energy that allowed us to play some of the most passionate soccer that we have ever seen.”

The women continues their defense of the national title in the NCAA sectionals round. They play against The College of New Jersey in Geneva, N.Y. at 11 a.m. on Saturday.