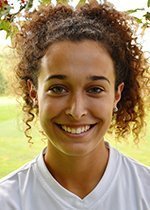 Recently named to All-NESCAC team, Webber scored the second goal to seal the Eph’s first round win against the Nor’easters. Photo courtesy of Sports Information.

“We’ve asked [Liz] to be more aggressive and defend higher and as a result she is defending as well as I’ve ever seen her defend. She has so many facets to her game, she’s an incredible reader of the game, tremendous organizer, insanely tough, terrific in the air and she can score on set pieces.” 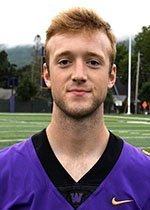 Bischoping filled in at the quarterback spot the last two games of the season, throwing four touchdowns and 362 yards. Photo courtesy of Sports Information.

“Jackson did a great job under very tough circumstances. Getting your first start in a game of that magnitude is not easy. Jackson handled himself with poise and made some great plays.”