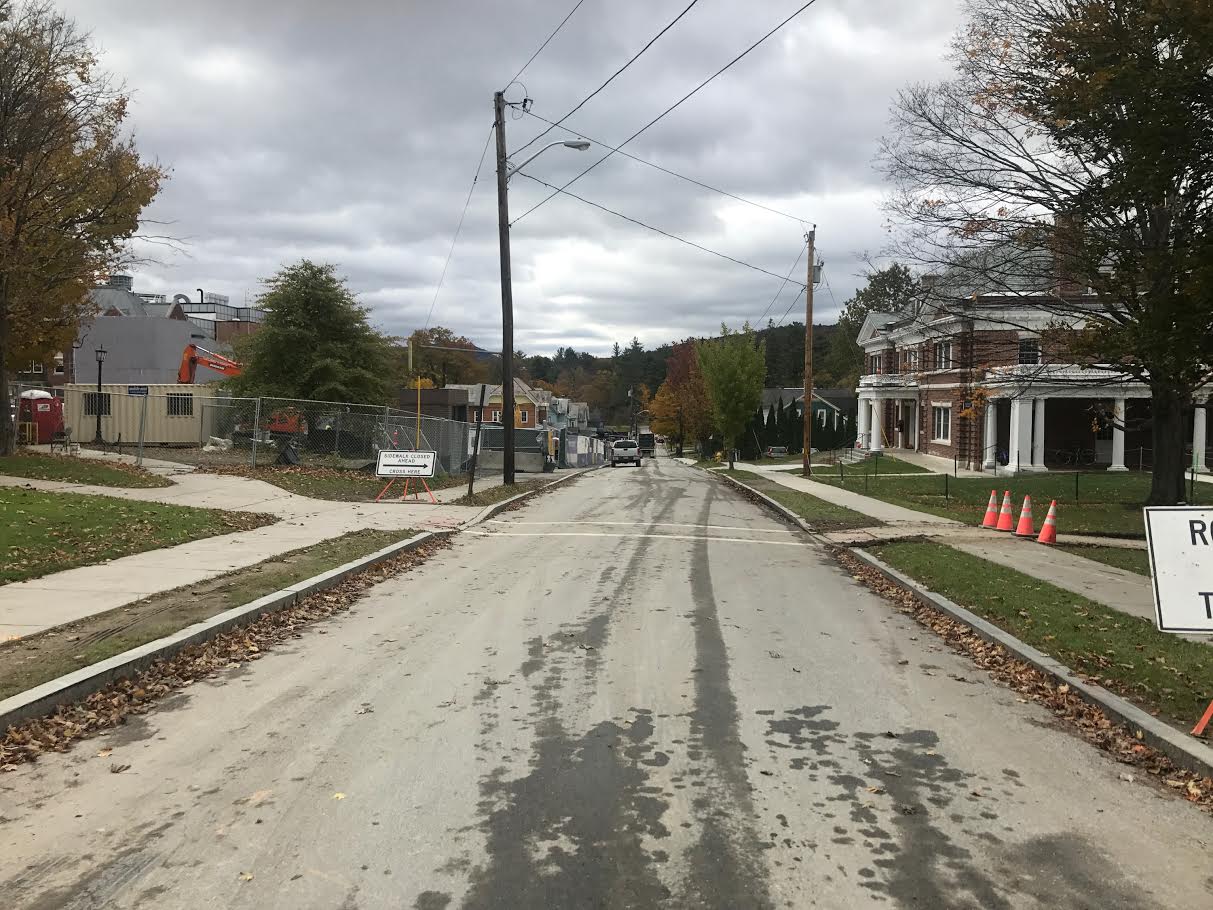 Some members of the Select Board were ambivalent about approving the street closure for Halloween on Hoxsey.
Samuel Wolf/News Editor

On Oct. 15, Williamstown community and Select Board members pushed back against student organization Reclaim Childhood’s requested closure of Hoxsey Street for their annual fundraiser, Halloween on Hoxsey. The group ultimately received approval and the block party went on as planned Saturday night. However, the event was brought up again at the Select Board meeting last Monday night.

Anne O’Connor ’86, chair of the Select Board, explained the process for closing a street. “Road closure requests are subject to a vote by the Select Board,” O’Connor said. “Requests are submitted in writing… They are vetted by the police chief who provides a recommendation to the Board determined on the basis of public safety. The police chief may meet with the applicants to discuss public safety precautions, and the applicants are encouraged to appear at the Board’s bimonthly meeting to answer questions.”

To obtain the closure, Reclaim Childhood chapter co-president Nina McGowan ’20 sent an email to Police Chief Kyle Johnson. McGowan and co-president Jesse Facey ’19 also met with Johnson to “discuss how to make Halloween on Hoxsey as safe as it can be,” Facey said. Johnson then emailed Town Manager Jason Hoch recommending that they approve the request due to safety reasons. “I fully support the street closure from a public safety standpoint,” the email said. “Darkness, combined with potential alcohol consumption by participants, are the leading factors to support the closure during this planned event.”

Despite the support of the police chief, some Select Board and community members were ambivalent about the party due to litter, noise and underage drinking. Those at the meeting asked Facey about the presence of alcohol and open container laws at the block party. Facey responded that Reclaim Childhood merely sells tickets to the event, and that the houses on the street that participate take responsibility for what goes on there.

O’Connor explained that the Board was torn on the approval. “The Board’s concern is for public safety, and that is what dictates our decision on street closure,” she said. “That said, we share the consternation of the community as a whole in the face of the noise and raucousness, litter and filth, public urination, vandalism, violation of open container laws and likely underage drinking that accompany the off-campus partying scene. When all the student houses on Hoxsey Street combine to throw a party, these concerns are multiplied tenfold.”

Hoxsey property owner Carol DeMayo was vocal at the meeting against partying on the street. DeMayo described her frustration following previous events. “I went at eight in the morning, and I was knee deep in garbage,” DeMayo was quoted as saying in an iBerkshires article. “Litter, clothing, red Solo cups, shoes, you name it. They said they picked up? No. Neighbors picked it up.”

Select Board member Jane Patton also warned Facey about the connection between the party and the organization. “If something awful happens, and it’s associated with the fundraiser for the charity, that’s not good,” Patton said in the article.

Patton voted against the closure, along with Board member Andrew Hogeland ’76. Hogeland made clear that the organization was on thin ice. “The message needs to be that it was barely approved and if it doesn’t work out, it’s the last time,” he said.

While Halloween on Hoxsey occurs every year, this is the first time that organizers received significant pushback from the community. “The pushback was, to some extent, new – but it spoke to an issue of which the Board and community are well aware,” O’Connor explained. “This year, community members and Hoxsey Street homeowners expressed their dismay at how parties have been managed in the past, and the Oct. 27 street closure request became an opportunity to speak to those concerns.”

Facey agreed with community members’ concerns, but, she felt that targeting Reclaim Childhood’s event was “misguided.” “I think a lot of the concerns raised during the meeting were very fair, and they informed how we went about planning the details of Halloween on Hoxsey,” she said. “However, some of the concerns and complaints raised extend far beyond the singular night of Halloween on Hoxsey and it was frustrating to feel that all of those issues were being lumped together.”

Ultimately, the closure was approved and the block party proceeded as planned. Facey emphasized that Reclaim Childhood took extra precautions in response to community concerns, including “[sending] a letter informing residents of the event with our phone numbers, continually evaluating the noise level throughout the night [and] cleaning up the street by 9:30 a.m. the next morning.”

The party was brought up again Monday night at the second bimonthly Select Board meeting. O’Connor summarized that the Board discussed positive and negative responses from the night. “Board members applauded what the organizers had done well, including calling campus security to get an ambulance for a heavily intoxicated student requiring hospitalization and soliciting help from security and the Town PD [Police Department],” she said.

Unlike the prior Board meeting, no community members outside the Board attended to complain. The Board, however, still felt ambivalent about the event. While the Board only approved the closure and not the party itself, she explained the Board’s lingering concerns. “Ms. Patton expressed the discomfort we all feel, seeming to be ‘complicit’ in enabling a partying event certain to include underage drinking,” O’Connor said.

O’Connor also noted that Patton brought up the idea of a follow-up discussion with the board and the party organizers, suggesting the continuation of the conversation between the Board and College students regarding off-campus parties.