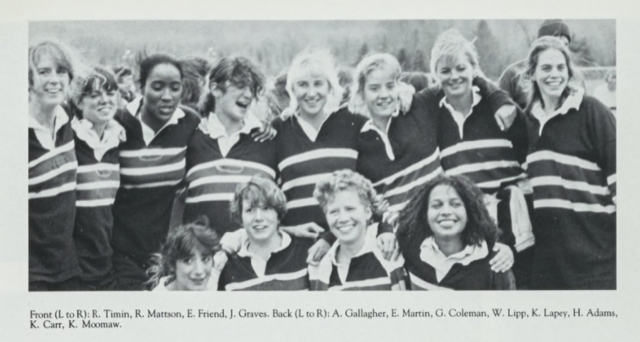 The Williams Women’s Rugby Football Club (WWRFC) organized a tournament in honor of the late Liz “Corngirl” Martin ’90 on Saturday. Saturday’s tournament was against Wesleyan, Holy Cross and Champlain but the women only played against Champlain due to bad weather, winning the match.

This season, the team currently has a playing roster of 11 women and is composed of athletes who have never played rugby before coming to the College. Due to the physicality of the sport and traditions of the team, the women build close bonds with each other. Many of the traditions have continued since the creation of the team in 1976. “One of our favorite traditions is singing from our expansive catalog of bawdy songs that have been passed down over the past 42 years,” Caldwell said. “Often after matches, we will get together with the opposing team and post-game by singing together, as some of the songs are common in clubs across the country.” Caldwell finds this opportunity meaningful as it allows team members to bond over the fact that they all play this “outsider” sport. “Our motto is Scite Terroris, which loosely translates to ‘know fear,’” she said. WWRFC boasts a strong alumni network and hosts reunions every five years.

This weekend’s tournament was held in memory of the passing of Martin. Head coach Gina Coleman ’91 played with Martin as a wing for all eight seasons at the College. Coleman remembers the naming of Martin as “Corngirl.” “On the first Friday of the first week of [Martin’s] first year at Williams, there was a signature rugby gathering just outside the east entrance of Mission Park dining hall,” Coleman said. “On the menu that night, there were many tasty items, including corn on the cob. As the newbies were initiated in song, [Martin] would repeatedly and clandestinely sneak inside to snatch a half ear of corn. We lost count at ten. She stood out that night, those crinkly sparkly eyes, that infectious laugh, all those corn cobs and hence the name was borne. R.I.P. Corngirl, you were one of a kind.”

The women defeated Champlain in two games of sevens. Sevens is the type of rugby played in the Olympics. Each game consists of two, seven-minute halves with seven players on each team on the field. The game feels more like a sprint. In the first game, Yang Lee ’20 scored twice, Caldwell in the fly half position scored once and scrum-half Justine Felix ’20 scored three times. The final score of the first game was 30-5. In the second half, there was less scoring overall. Felix scored another two tries and Shayde Brown ’20 scored her first trying, resulting in a final score for the second game of 15-7. Two additional highlights of the game were a maul from Kimberly Andreassen ’20 and Felix’s 80 meter run that resulted in a score.

Despite this win, the women lost their first White Dawg earlier this month.  The White Dawg is “a proud and elegant creature with fondness for routinely thrashing donkeys” and also the team’s mascot. “During the final half, a rainbow could be seen spanning the width of the pitch,” Caldwell said. “It added a touching note to our day honoring a forever White Dawg.”

WWRFC end their fall season on a strong note and thank their fans for coming to their tournament in honor of Martin, despite the bad weather. “It was cold, rainy and windy, but we are very grateful to the many fans that came and showed their support,” Caldwell said.