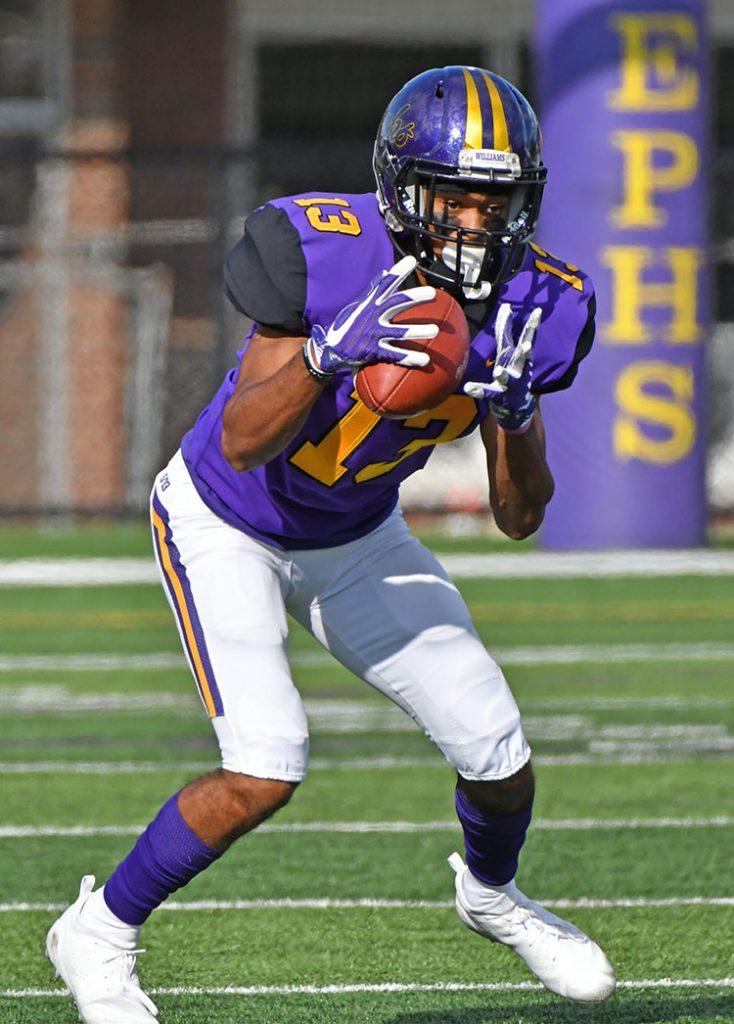 Justin Nelson ’21 recorded 59 receiving yards and caught the first touchdown for the Ephs on Saturday. Photo courtesy of Sports Information.

Hamilton had taken the lead at the end of the first quarter on a 35-yard pass from quarterback Kenny Gray to a wide-open Christian Donahoe in the end zone, which followed a Williams field goal drive – their second drive inside the Continentals’ 30-yard line up to that point. The first ended in a turnover on downs, when the offense stayed out on fourth-and-five only for Maimaron’s pass to be deflected and nearly intercepted.

Early in the second quarter, wide receiver Justin Nelson ’21 provided a much-needed spark to the Williams offense, returning a kickoff all the way to the Hamilton 30-yard line. Three plays later, on a crucial third-and-eight from the 28 yard line, Nelson ran a brilliant route to the front right corner of the end zone, hauling in a pass from quarterback Bobby Maimaron ’21 to put the Ephs on top 10-7. The Ephs would hold the lead from that moment on.

Following Nelson’s electric drive, the Ephs’ defense forced a fumble, recovering with great field position. Maimaron then gave it right back, throwing an interception on a tipped ball to defensive back Colby Jones. But after the Ephs’ defense forced another punt, the offense ran an impressive two-minute drill, highlighted by a 14-yard pass on third-and-nine from Maimaron to Nelson and a third-and-eight slant that quarterback-turned-receiver Dan Vaughn ’22, lining up in the slot, took to the house for a 19-yard touchdown to put the Ephs up 17-7.

“We moved Dan over to [receiver] this week, and he had a great week,” head coach Mark Raymond explained after the game. “Bobby developed some confidence in him, and went to him in a big situation there.”

After a third quarter in which both teams traded field goals, the Ephs’ defense forced three Gray interceptions in the fourth, with linebacker Coleston Smith ’22, junior safety Luke Apuzzi ’20 and defensive back Jake Kastenhuber ’21 picking off the passes. Coleston’s interception, the first of the three turnovers, led to a one-yard touchdown run by running back Carter Begel ’22 that gave Williams a commanding 27-10 lead. The Continentals scored a touchdown on their last drive, but it was too little, too late as the Ephs were able to run out the clock from there.

The lousy weather conditions led to a few unforced errors from the Williams offense, as the offense recorded three fumbled snaps. It could have been worse, though, as only one was recovered by the Hamilton defense. Rejuvenated by the return of linebacker TJ Rothmann ’21 (who tied for the team lead with six tackles), the Ephs’ defense also won the turnover battle, forcing four to the Continentals’ two. It was the most turnovers that Williams had forced in a game this year, a trend that the Ephs will hope to carry into two important games against Wesleyan and Amherst to finish off the season.

The Williams offense wasn’t explosive, but it got the job done. While Maimaron completed less than half of his passes, going 11-of-24 for 158 yards, he still threw for two touchdowns – including the gorgeous throw to Nelson – and rushed for 93 yards. Not to be outdone, the workhorse Begel matched that figure, carrying the ball an impressive 30 times. Nelson paced the receiving corps with his best game of the season, catching four passes for 57 yards and the score.

For the Continentals, Gray completed just 13 of 37 passes for 225 yards with one touchdown and four interceptions, all of which came in the fourth quarter. Hamilton was unable to put up a consistent rushing attack, gaining just 59 yards on the ground. Wide receiver Donahoe, however, had an incredible game, racking up 168 yards on eight catches and a first-quarter touchdown.

Raymond was impressed by the Ephs’ performance in the rain. “You just have to deal with [the rainy weather],” he said. “I’m proud of the guys. They dealt with the elements of throwing and catching and taking care of the football today.”

Next Saturday at 1:00 p.m., Williams will host Wesleyan in the annual homecoming game.