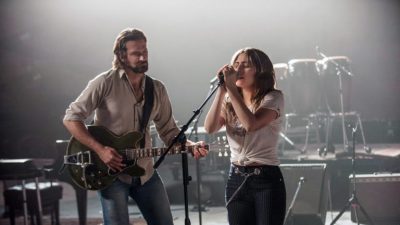 If you had told me that Bradley Cooper, whose last major onscreen role was Iraq veteran Chris Kyle in Clint Eastwood’s aggressively patriotic biopic American Sniper, would direct film’s newest camp classic only four years later, I would have called you crazy. However, Cooper’s A Star is Born, which came to Images Cinema last Friday, is just that – campy, unrealistic and (because of the former) thoroughly enjoyable if you don’t take it seriously.

Cooper’s A Star is Born is the fourth iteration of the 1937 original. When you consider the simple but effective formula of A Star is Born, you might be able to understand how it miraculously survived three remakes. The plot follows Jackson Maine (Cooper), an alcoholic country star who encounters Ally Campana (Lady Gaga), a struggling singer, while performing as Edith Piaf in a local drag bar. Struck by her voice (and her beauty), he invites her to perform with him on a leg of his tour. The rest is classic blockbuster fodder: Ally’s career takes off, Ally changes her image, Jackson falls deeper into his addiction, trouble ensues in what was hardly paradise to begin with. More often than not, Cooper seems to lean into these tropes, perhaps more out of inexperience than disregard for realistic storytelling – A Star is Born, is, after all, Cooper’s directorial debut. As a result, the film often feels dangerously close to cliché, especially in its “romantic” dialogue. One particularly patronizing exchange occurs when Ally spontaneously begins to sing a verse she’s written in a parking lot (with curiously good acoustics). After she’s finished, Jackson whispers, “Can I tell you a secret? I think you might be a songwriter.” Well, Jackson, considering she just sang you a song she wrote, that might be a pretty good guess.

The romantic dialogue is not the only heavy-handed element of the film; Jackson’s addiction is also handled sloppily. From portraying characters downing three drinks in the first ten minutes to crushing pills, snorting cocaine and smoking joints at several points throughout the film, it is unclear if A Star is Born is a cautionary tale about addiction or a visual tour of how to use every controlled substance imaginable. And the plot, which pits Ally’s career success against Jackson’s declining control over his addiction, seems to have dangerous ideological implications. Although Bobby (Sam Elliott), Jackson’s older brother and manager, reassures Ally that Jackson’s addiction is not her fault, the cinematography often says otherwise. After only a few days sober, Jackson reaches for the bottle again during one of Ally’s performances, one that features rump shaking, cleavage and explicit lyrics as part of her agent’s scheme to convert Ally into a pop idol. The implication of this juxtaposition? Ally’s overt sexuality is a distressing enough breach of values to prompt a relapse.

So is A Star is Born redeemable? Yes – but not as a serious narrative of heterosexual love and artistry. Rather, A Star is Born is a compelling reflection on camp hiding in plain sight. In common parlance, camp refers to anything “deliberately exaggerated and theatrical in style, typically for humorous effect.” Camp aesthetics, a cornerstone of gay culture, have entered the cultural mainstream by way of drag. However, while related, drag and camp are not always the same thing – drag queens often base their personas off of cisgender celebrities who embody camp aesthetics. These celebrities such as Barbra Streisand and Cher enjoy status as “gay icons”; considering that Lady Gaga is part of this lineage of “gay icons,” this sheds light on why she was tapped for this particular role. After all, the two previous remakes of A Star is Born star Judy Garland and Barbra Streisand respectively. Coincidence? I think not.

A Star is Born is therefore the story of a woman exchanging one expression of camp for another. Ally begins the film in drag (another unrealistic aspect of the film – it seems implausible that any queen would willingly relinquish her stage to a cisgender, straight woman whose only offering is an embarrassingly tame rendition of “La Vie En Rose”) and ends the film with a new hair color and false eyelashes. This latter expression of camp, however, is not self-directed, but thrust upon her by the music industry, which demands she change her appearance to fit a popular image. A Star is Born never gets around to overtly addressing its strongest message: “making it big” requires a lot less of men than it does of women. While Jackson Maine retains his fame despite appearing unkempt, unshaven and intoxicated in public, Ally is not held to comparable standards. And when Jackson begs Ally to “stay true to herself,” he is valorized as a defender of good taste rather than a partner blind to the immense pressure Ally is under.

A Star is Born in some ways mirrors Gaga’s own journey away from traditional camp. The Gaga of 2010, who appeared in drag as Jo Calderone at the VMAs, is nowhere to be found in A Star is Born. Rather, the camp is retained in how seriously we are expected to take Gaga’s performance. I don’t mean to imply Gaga’s performance was not good – Gaga’s character is unusual and compelling, and very human. Gaga’s performance succeeds precisely because we have her icon status to latch onto. Rather a stale love story, A Star is Born encompasses its own parody, which makes it unintentionally tongue-in-cheek entertainment.