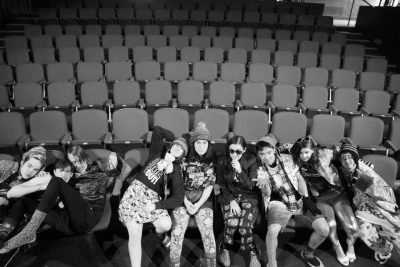 I attended the second showing on Saturday evening, which – being both the Saturday of Family Days and “Halloweekend” – was an exciting day for the College student body. This excitement buzzed through the audience as we amused ourselves by reading the hilariously eccentric cast bios. We were greeted by a lively gig performed by the directors, merrily requesting us to shut off our cell phones before the show.

The show began with a whirlwind rendition of the overwhelming, frightening and exhilarating First Days experience, set to ABBA’s classic tune “Mamma Mia.” I was immediately impressed by the cast’s theatrical enthusiasm and energy. Their body movements were appropriately dramatic and expressively theatrical, and their facial expressions were perceptible even from where I sat, at the back of the auditorium.

The cast then performed the opening scene, a skit that instantly gave off a Mean Girls vibe. The performance was riveting, and the audience was immediately enamored. The skit featured the classic main characters from the film: the three mean girls known as “the plastics,” the protagonist Cady, her two friends Damian and Janis and the popular boy Aaron. Taking place at the College, this bit continued in intervals throughout the entire performance and even featured the infamous scene where Regina George is hit by a school bus, although it was exchanged for a North Adams shuttle in this rendition. The ending of the show was also similar to the movie’s ending, in which Cady breaks her plastic “Spring Fling queen” crown into pieces and shares it with the other nominees.

Following the initial Mean Girls skit was my personal favorite, in which a trio interlocked arms as they spoke in hilariously ridiculous high-pitched voices and called themselves “The Knights Who Say Snar.” The scene revolved around a three-headed beast holding two Snack Bar employees hostage for the ransom of a “straw…berry…smoothie!” from Snack Bar. In this skit, however, Snack Bar was in fact out of strawberries (having only strawberry-banana, strangely).

Next up was a twist on the classic 1998 film, The Parent Trap. This time, in place of Hallie and Annie stood Hollander Hall and Shapiro Hall, two almost identical buildings on campus. The skit began with an intense fencing battle, followed by a catty argument over which building is superior. The argument highlighted the main difference between Hollander and Shapiro, namely the concentration of Division I classes and offices in the former, and Division II classes and offices in the latter. The buildings eventually came to the resolution of switching places, using the classic lines from the film and even performing the famous elaborate handshake routine to close the deal. At first, students were frustrated by the switched locations of the buildings, but eventually the skit concluded in a heartwarming manner: a Division I major decides to explore philosophy and pursues a double major, and a Division II major decides to learn French and becomes fluent.

As an interlude, the cast performed another overview of the first-year experience set to Ke$ha’s “TiK ToK.”

The next skit was an unexpected one – a parody of the children’s show Blue’s Clues.Tran took on the challenge of playing the complex character of Blue and was a very convincing animated blue puppy. This skit involved Blue finding various clues, including a box of apple cider donut crumbs and Scott Lewis himself, ultimately helping “Steve” finally realize that it is, indeed, Mountain Day.

We then were introduced to an alarming group of first-year students on a WOOLF trip. These WOOLFies, as described by a convincing Steve Irwin interpretation, ate peanuts from the dirt. The audience got a laugh out of watching these poor students rough it in the wild as the brave narrator described the scene in vivid detail.

This was followed by a skit that took the audience on a roller coaster ride through the first-year experience – beginning with an overwhelming fall schedule, a subsequent excitement for and eventual boredom during Winter Study, the disillusionment of Frosh Formal and a fresh appreciation for spring semester.

The cast then performed an amusing rendition of the film 21 Jump Street, which follows two cops going undercover as high school students to infiltrate a drug ring. This twist featured two Campus Safety and Security (CSS) officers who go undercover as College students to discover the source of the atrocious “hugs” that have been spreading across campus. The CSS officers discover that none other than the beloved president of the College, Maud Mandel, is the source of these hugs – and the duo decide that perhaps these hugs aren’t so bad after all.

I was beginning to contemplate how President Mandel herself would react to this skit while listening to Frosh Revue’s conclusion, set to the familiar tune of Britney Spears’ “Womanizer.” After the show concluded, I was pleasantly surprised to see the President herself, standing a row in front of me on the other side of the auditorium. The Frosh Revue cast shouted, “We love you!” and Mandel, in all her grace, responded by blowing three elegant kisses in return and presenting the cast with air hugs, a thrilling conclusion to a sensational performance.