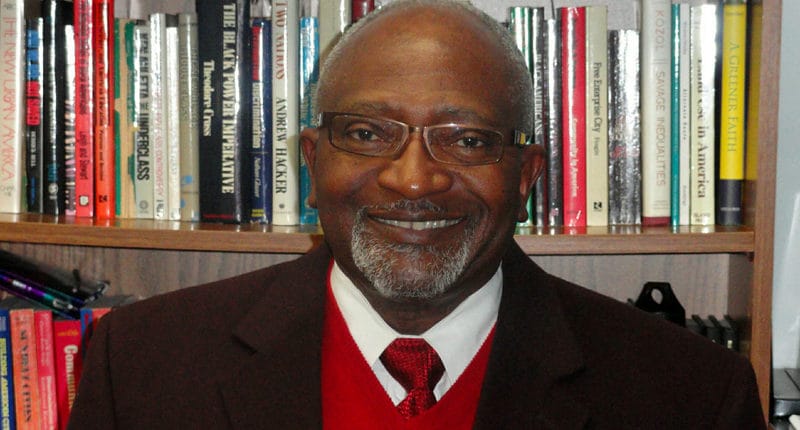 Sociologist Robert Bullard, who spoke at the College on Friday, was an early pioneer of the intersection between environmental and racial justice. Photo courtesy of drrobertbullard.com

As part of the Afro-Diasporic Environmentalism Series, the Africana studies and geosciences departments hosted veteran sociologist and “father of environmental justice” Robert D. Bullard on Friday afternoon to speak and sign books.

The event, “The Quest for Environmental and Climate Justice: Why Race and Place Matter,” told the story of Bullard’s venture into environmental justice, a subject in which Bullard is a forefront scholar. Indeed, Bullard’s 18 published works largely focus on the disproportionate environmental injustices faced by black people and other people of color. His lecture took place in a packed room of over eighty students, staff, faculty and parents during Family Days.

Chair and Associate Professor of Africana Studies James Manigault-Bryant opened the lecture by highlighting the College’s recent events that have focused on the intersection of race and the environment, including visits by scholar-activists Winona LaDuke, Makota Valdina and Beverly Wright. “We have seen an eruption of interest in the environment from numerous sectors on campus,” Manigault-Bryant said. Bullard was then formally introduced by Assistant Professor of Geosciences José Constantine, who described Bullard as having gotten “his hands dirty to make this world a better place for you and I.”

Bullard began by discussing the responsibility of young people, and students especially, to support and bolster progressive social movements, an idea he compared to a marathon and repeated throughout the lecture. “I’m a teacher, I love teaching,” he said. “And I’m pretty good at it. And I like writing, I like doing research, I like working with communities, with young people – with students,” he said. “Young people, you can change the world, one day at a time.”

Bullard briefly touched upon the multiple books he had written before delving into the bulk of the speech. The focuses of his works have spanned transportation, housing and schools, all in relation to how people of color have been forced to navigate their lives in spaces that are hazardous for their health. “Sociologists are good at connecting dots,” he said. “I’ve written 18 books, but it’s just one book. Don’t tell anybody. And the thing that connects the dots, in all those 18 books, can be summarized in fairness, justice and equity.”

Bullard led the audience through his journey from a relatively unknown sociologist in the 1970s to a leader in environmental justice. In 1978, Bullard served as an expert witness in Bean v. Southwestern Waste Management, Inc., a case that was brought to his attention by his wife, who was the attorney representing the Houston residents who were fighting against a plan that would situate a landfill next to their neighborhoods. Bullard collected census data and found that the vast majority of landfills were located in black neighborhoods, despite black people making up only 25 percent of the city’s population. This project marked the beginning of the environmental justice field. “That’s how I got pushed into doing this [by my wife],” he said jokingly. “I had ten students in my research class at the university where I am now, and I told my students, I am going to train you to do a study and this is what we’re gonna do… I didn’t plan this.”

The process of getting his first book about Houston published was slow and frustrating for Bullard, who described publishers rejecting his manuscripts and writing back that he couldn’t link the environment to race. “The environment is neutral … There’s no justice in environment, it’s just environment,” he recalled them writing. Eventually, a publisher out of Boulder, Colo. accepted his book Dumping in Dixie as a textbook.

In 1991, the University of Michigan reached out to Bullard and other sociologists to create a conference later known as the Michigan Coalition. “[They said] let’s find somebody that is doing what you’re doing. So we rounded up all five of us,” Bullard said. “It was such a great conference we started working together.” This was the first of multiple conferences that focused on environmental justice in the 1990s, including two National People of Color Environmental Leadership Summits and meetings with the Environmental Protection Agency (EPA). In this era, Bullard described the activists as “very aggressive, assertive, some folks even said militant. … We locked the doors and said nobody’s leaving until we get some confirmation that you want to do something about this.”

The meetings were followed by national reports coming out of the government on environmental racism, and the signing of Executive Order 12898 under President Bill Clinton. This order “focus[ed] federal attention on the environmental and human health effects of federal actions on minority and low-income populations with the goal of achieving environmental protection for all communities,” according to the EPA. Bullard was present during the signing.

In 1999, the Institute of Medicine published “Toward Environmental Justice,” confirming Bullard’s longtime claims and research. “Bingo! That’s what we’ve been saying all along, smart people,” Bullard said of the report. “We said, you got it. It’s important for messages to come from those kinds of messengers. Because just listening to us ain’t good enough.”

Bullard’s work and activism continued through the 2000s. In 2007, he participated in writing an updated report from the United Church of Christ, which found that “people of color are still more likely to live near these facilities.” In 2010, Bullard and a geographic information system expert mapped the effects of the BP spill’s waste in nearby black communities.

Bullard wrapped up the lecture with a series of relevant statistics and correlations to show the severity of environmental racism in communities populated by people of color. “No community should become a dumping ground, no population should receive more than their fair share and there is no fair share,” he said. “Environmental justice is not about spreading the poison, it’s about eliminating the risk and preventing the hazards. … We’re fighting, not just fighting for the environment, but we’re fighting for our lives,” he said.

After Bullard’s closing remarks, he answered a few questions from the audience and emphasized his belief that the future is with students at the College and young people across the world: “I pass the baton, I stand to the side, I become an elder,” he said. “I was passed the baton. And everything that we do is built on something else. And that’s how I see movements growing and continuing. We step aside, we don’t lead anymore. We let young people lead.”