The Williams Record • May 8, 2019 • https://williamsrecord.com/92893/features/students-raise-money-to-buy-books-for-local-schools/ 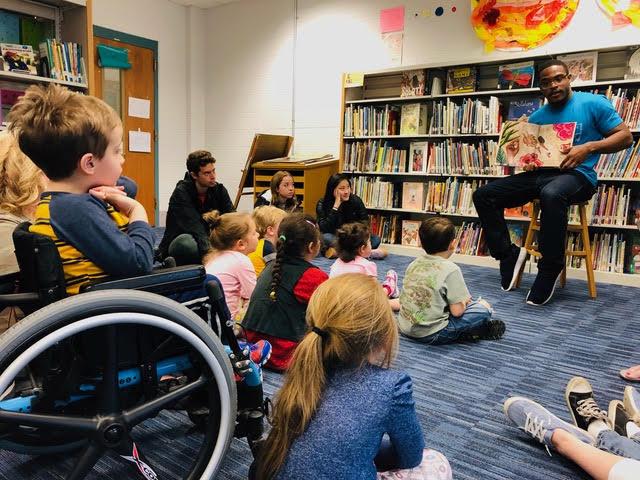 Although the world beyond campus can sometimes feel distant from the Purple Bubble, some Ephs prioritize turning the unique resources available to students at the College into tangible services for the greater community. This is exactly what Kiri Peirce ’20 and Emma Reichheld ’19, two student leaders for the North Adams Public School (NAPS) elementary outreach program, had in mind when they came up with the NAPS Reads program, a new Center for Learning in Action (CLiA) initiative that aims to raise money on campus to purchase new books for North Adams elementary school libraries. In the program’s first iteration, 520 student participants raised $1850 through a meal swipe fundraiser. The money will be divided among the three North Adams elementary schools to almost double their book purchasing budget for the next school year.

Before their fundraising began, the student team, which included Peirce, Reichheld, Joseph Wilson ’19, Jacob Justh ’20, Emma Lezberg ’20 and Isabel Torres ’19, reached out to NAPS librarians to determine whether they felt that such a program would be useful and what kinds of books they might be interested in. “We have been striving to choose diverse books,” said Sarah Farnsworth, head librarian at Brayton Elementary School. “It’s important that when students choose to read for pleasure, they can see themselves in the protagonists… We have been aiming at books that represent different ethnicities, genders, settings, circumstances, etc.” Getting a diverse selection of children’s books on a tight budget can be difficult, so the librarians were delighted to hear that Williams students wanted to help.

Once they had established their goal, the student team turned their attention to the College community. “Accepting monetary donations is complicated,” Peirce explained, “but they can accept book donations no problem. So we decided the best way to do it would be to raise the money and work with them to come up with a list of books that we could then buy with the money and donate.”

With this in mind, the student team settled on a meal swipe fundraiser. They worked with Driscoll staff to host a “Kids’ Night” themed dinner featuring childhood classics, including chicken nuggets and macaroni and cheese, where students on the meal plan could donate one “swipe.” They also tabled in Paresky during the preceding week, accepting both donations and book recommendations from students. “A quarter of the student population donated,” Reichheld said, “which was really exciting. It was also fun to see people really excited to list favorite books that they had read when they were little.”

The student team is currently in dialogue with librarians about what books to purchase. In addition to diversity in terms of race and gender identity, the team looks to buy books that feature a wide array of in socioeconomic and family status. “In North Adams in particular, our kids come from a variety of family backgrounds,” Peirce said, “so [we look for] books that feature families other than your typical nuclear family unit … [such as] single parent households and even some books about families struggling with addiction or incarcerated parents.”

Although the final purchases have yet to be made, Williams students went into the elementary schools this past week to read from select books from the public library, giving the elementary students a taste of what titles they may have access to next year. Reichheld described a moving experience from her visit. “I was reading one book about a family in a shelter,” she said. “The idea of the book was, ‘My dad doesn’t live with us in the shelter, but we are still a family.’ And afterwards a number of the kids had comments to say, ‘Oh, my dad doesn’t live at home, but we are still a family too.’ They immediately connected with that.”

The CLiA leaders saw firsthand the impact of new books on those visits and hope to continue the project in some form next year. The North Adams Public Schools district, too, has been pleased with the endeavor and looks forward to more partnerships with the College in the future. “Everyone knows the value of putting a good book into a child’s hand; I think the best part of the project was demonstrated in the community partnership between Williams College students and the North Adams Public Schools,” said Kimberlee Chappell, the NAPS literacy coordinator. “We look forward to growing our relationship so that our students and Williams’ students can support one another in the quest for life-long learning through literacy.”