The Williams Record • May 8, 2019 • https://williamsrecord.com/92886/features/paul-gleason-64-wraps-up-term-as-freemason-grand-master/ 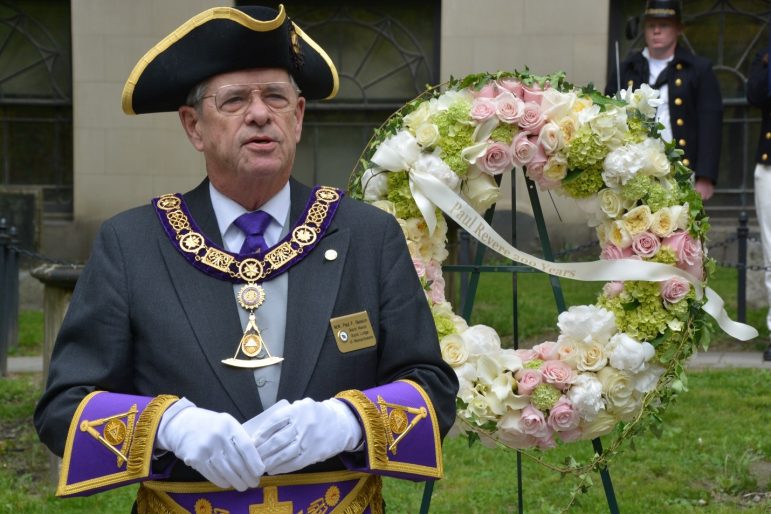 Gleason attends a commemoration for Paul Revere, who was Mass. Grand Master from 1795–1797. PHOTO COURTESY OF JAMES ORGETTAS.

Though students at the College have been banned from participating in fraternities since 1962, Paul Gleason ’64 takes pride in being the figurehead of what he calls “the world’s largest and oldest fraternity” as the Grand Master of the Freemasons of Massachusetts. Gleason is serving his third and final year-long term as Grand Master, a position that makes him the third-highest-ranking Mason in the world and puts him at the forefront of an organization that includes 26,000 members across 225 constituent lodges statewide.

Freemasonry is an international network of fraternal organizations that traces its roots back to the craft guilds of medieval Europe. Nowadays, the structure of American Freemasonry consists of a network of local lodges, all of which operate under the supervision of Grand Lodges – each governed by a Grand Master – with wider provincial authority.

Masons are allowed increasing degrees of insight into the customs and traditions of the organization as they ascend through its ranks. Gleason was quick to dispel rumors regarding the Freemasons’ perceived secrecy. “We do not have Solomon’s treasure, or if we do, it’s in another state, because I’ve never heard of it,” he said. “We don’t burn children. Those are all just stories on the internet.”

Though he was a member of the Zeta Psi fraternity during his time at the College, Gleason didn’t become a Mason until several years after he graduated. “I was sitting in church next to my wife, and a fellow behind us – who happened to be my wife’s distant cousin – leaned forward and tapped me on the shoulder,” Gleason said. “He asked me, ‘Have you ever thought about joining the Masons?’ And my wife replied, ‘Yes, he has.’ Well, I turned to her, and I said, ‘Oh, really?’”

Despite his relative’s rather unorthodox approach, Gleason said that he found himself quickly swayed. “I went over to his house that afternoon, and as they say, the rest is history,” he said. “He gave me a very good description of what they do, I liked what I heard, and I’ve enjoyed it ever since.”

Not long after, he gained an official position with the William Parkman Lodge, where he served in the same role for over 20 years. “At the local level, I was the Secretary of a lodge in Winchester, where I live,” he said. “That ended up becoming a long-term occupation. I just kept going and enjoying it.”

Meanwhile, Gleason spent an even longer career as an engineer with the Mitre Corporation, a nonprofit that specializes in scientific research and development for federal agencies. Working at the same place for 39 years allowed him to consistently attend the same lodge throughout. “[Freemasonry] wasn’t a major part of my life at that point, but I enjoyed the monthly meetings,” he said. “Making everything work as Secretary could be tough, but I liked the challenge of organizing.”

Being selected as Grand Master came as a major surprise to Gleason. “Really, I never thought it would happen,” he said. Much of his initial time in office was spent getting acquainted with the nuts and bolts of the position. “In most states, you work your way up through the junior offices, and you’ve got all that time to learn the job,” he said. “In Massachusetts, it’s not a learning curve – it’s a learning cliff. A lot of people help me out, though, and I love it.”

Gleason said that the hardest part of the job comes when he has to make decisions regarding discipline. “When people don’t behave in a Masonic way, you generally have to suspend them so that the fraternity isn’t judged by the bad apples,” he said. “I tell people that if you are a Mason, when you see someone with a square and compass on their lapel or on their ring, you already have something in common with them. And you can just tell that you’re going to enjoy knowing this man.”

For Gleason, the connections he has formed through the role make the job worthwhile. “You get to meet people you would never meet anywhere else,” he said. “That’s really the joy and attraction of this fraternity. I can walk into a room and see 200 people in tuxedos and realize that if I were not a Mason, I wouldn’t know a single one of them.”

Though he enjoys serving as Grand Master, Gleason is looking forward to retiring at the end of the year, he said. “Soon enough, I’m going to give up all the bling and the glory and my company car and go back to what I used to be doing,” Gleason said. “I’m going to assume the best of all possible titles: past. There’s really no title better than that.”