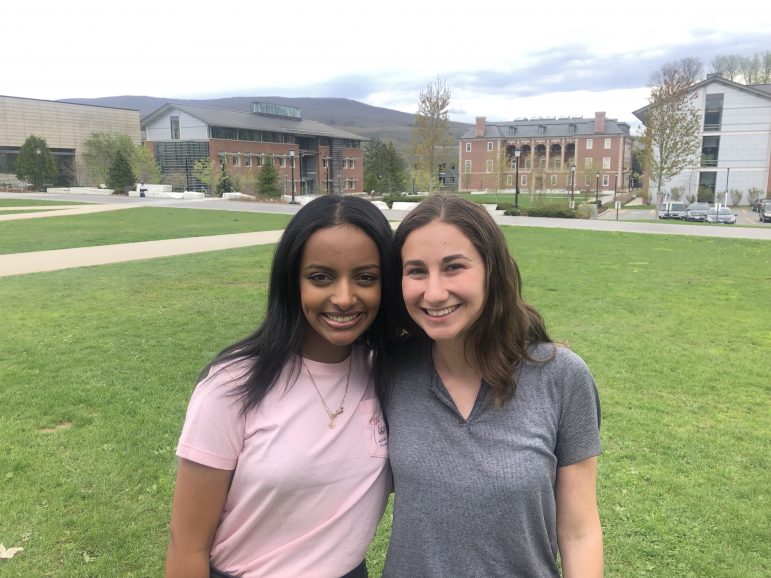 Tesnim Zekeria ’19 and Rachel Scharf ’19 served as editors-in-chief of the Record in 2018. We sat down with them to discuss their newfound free time, the value of the Record community and sleeping over in the Record office.

DJ: So, how’s life after the Record?

RS: Pretty good. I have so much time that I don’t know what to do with. I don’t know about you, Tess, but the Record really structured my time at Williams because I was doing the Record since my freshman spring. I’m just used to Wednesday night: meeting. Sunday: meeting. Monday: meeting. On Tuesday, I always feel this weird sense of, “I should be doing something, and I’m not,” so that’s strange. But other than that, pretty good.

TZ: I have a lot of time, too, because the Record also structured my schedule. I also feel so out of the loop. I used to be really plugged in, and I knew about everything and could just dish out knowledge during random conversations. People would be like, “How do you know this?” and I’d be like, “Oh, Record. We’re running an article on it.”

But now, I have to wait until Wednesday to get my news like everyone else. [Laughs.] So that’s been a bit of an adjustment.

NG: What do you miss most about the Record?

TZ: Definitely the people. I’d say that would be the main thing. Record’s a pretty fun group. A pretty eclectic and funny group – I would add that as well.

RS: Yeah. I definitely miss the people. I’m a tour guide, and whenever I get the question on tours of, “Is it really alienating to not be an athlete at Williams?” what I say is, “Some people say that, but in my experience, if you have something that’s your thing at Williams – a group of people that are your go-to people because you share a common interest – you’re fine.” For some people, it’s a sports team, and for me, it was the Record… I think it’s just a really awesome way to create a community of people, and I am so thankful that I had Record as a part of my Williams experience.

DJ: What would you say are the values that most shaped the way you ran the paper?

RS: I think for me, because I always really valued Record as a community of people, my first priority was always the cohesiveness of the group and everyone being happy. I started as the spring EIC [editor-in-chief], which means we had just hired a new crop of freshmen. When you have the new group coming in, it’s really important to focus on making the paper an exciting place to be.

TZ: I would say empathy. I tried to be empathetic not only with the board but with our audience too. I really tried to tune in and figure out what it was that people wanted to read, and was focused on making sure that our paper had meaningful content that people were interested in and would engage with. This was something that was always on my mind. I would ask myself, “OK, we only have these 12 pages. What are we going to include?” Because for every decision of what you’re going to include, you have to consider what you’re not going to include. Being intentional about what we do put in the paper is an act of empathy in that regard.

DJ: What were some of the biggest challenges of working on a newspaper at a small college?

TZ: Building trust with the community. One thing goes wrong, and everyone knows about it, and everyone talks about it. So it’s really hard to rebuild that trust, particularly with communities that we have in the past neglected in terms of our reporting and content decisions. So that’s something I really struggled with, even starting off as an opinions editor. Having people feel comfortable and confident that we could take their writing and actually exercise due diligence was something that I realized was a bigger job than it actually seemed.

RS: I do think one really cool thing about Williams being a small college is that when you work really hard on an article, people you know might actually read it. I’ve had people come up to me and say, “Oh, I really appreciate your coverage of this. Or, “Hey, you missed this part in your coverage of it.” The fact that the campus community is one in which people know each other and the Record’s work is one part of building that community is a really cool thing to be a part of.

DJ: Do either of you have a moment or memory that really encapsulates your experience on the Record?

RS: About a year ago, a bunch of us slept in the office one night. [Laughs.] I think that’s one of my favorite memories of this community. We were all hanging out in the office late one night and all fell asleep on one of the beanbag chairs, literally covered in newspapers as blankets. I always think about that memory when I think about the Record because I just remember being so happy with the community of people on the paper.This space of the Record office has become a home for me at Williams, a place so comfortable for me I could sleep in it. I’ve been really emotional these last few days about leaving Williams. I’m going to miss this place so much, and the Record has definitely been a big part of it. I’m going to stop talking now so that I don’t cry.

TZ: I think coming in here on one of our days off and still seeing people in the office – those are probably some of my favorite memories. It’s like: You come up here on a Thursday or a Friday at noon because you want to avoid the Paresky rush downstairs during lunch, and you find some of the Record people basically hiding out as well… Although we spend countless hours here, people still have made this space their home, and it’s super awesome to have been able to share that with folks here. It makes me feel warm and fuzzy.