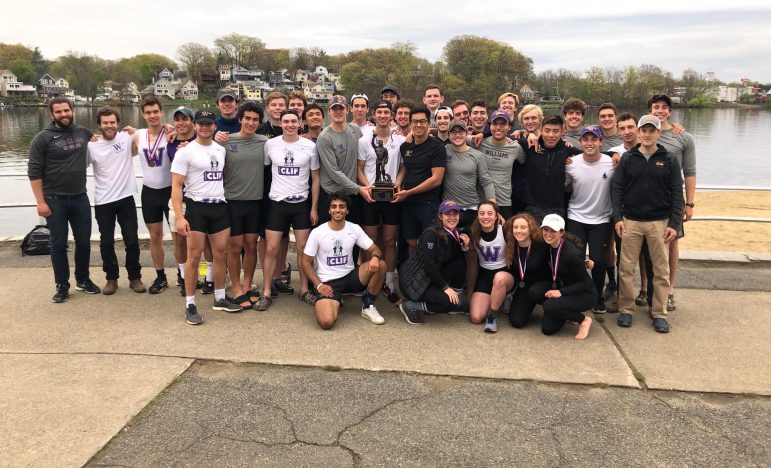 Men’s crew claimed a victory on Saturday after all four boats earned medals. The 4V and 3V won silver, and the 2V and 1V earned bronze. Photo courtesy of Sports Information.

Men’s crew claimed a victory on Saturday after all four boats earned medals. The 4V and 3V won silver, and the 2V and 1V earned bronze. Photo courtesy of Sports Information.

On Saturday, men’s crew won its first team championship since 2001 at the New England Rowing Championships. All four boats brought home medals to secure the title on Lake Quinsigamond.

The 4V set the tone for the rest of the team by leading off the day with a silver medal. In the afternoon final, the men got off the line well, matched only by Boston College and UMass in the early going. Boston College quickly separated from the field while the men pushed ahead of UMass. At the midpoint of the race, the crews were separated by open water and continued to spread out through the second half of the race. Boston College won in 6:31, and Williams took silver in 6:44.

Regarding her crew, Coxswain Margot Berman ’22 said, “Not only did we execute the race plan exquisitely, we found some extra speed in the final 400. The boys really dug deep.”

Next up, the 3V matched the 4V’s performance with a silver medal of its own. The crew had an uncharacteristically slow start off the line in the final and fell behind the entire field in the first 250 meters. The Ephs improved marginally throughout the first half of the race and clawed their way back into the pack. At the 1000-meter mark, the men launched into their middle move and pushed their way into third place, ahead of Bates and WPI. From there, the boat found its rhythm and walked from half a length down to a length up on UMass coming into the final sprint. The men put together a strong and connected sprint, but they were unable to pull ahead of Boston College for the win. The Eagles won in 6:22, followed by the Ephs in 6:25.

Coxswain Katie Friedman ’22 said she was proud of how her boat showed resilience after a tough start. “We were a little flustered off the start, but found our rhythm through the middle move and were able to reach our top gear through the finish line,” she said.

The 2V added to the medal haul with a bronze in its race. The 2V first won its morning heat against Wesleyan to secure a favorable lane in the afternoon final. At the start, the men fell a bit off the lead and came through the 1000-meter mark in fourth place behind the Cardinals. In the third quarter the Ephs dug deep and pulled away from the Cardinals. For the final 500 meters, the men continued to lead Wesleyan but were unable to pass Boston College. Bates won in a time of 6:18, followed by Boston College in 6:21. The men finished two seconds later in 6:23.

Six-seat Cameron Edgar ’21 said his crew’s unity was key to its finish. “I felt that our boat found a new level of patience and unity and it really showed both in our heat and in the final,” he said. “It was really great to go out there and defeat crews we lost to earlier in the season, and I can’t wait to see what kind of speed we can build over this last week before [National Invitational Rowing Championships (NIRCs)].”

To seal the team’s championship, the 1V capped off the day’s racing with its own bronze medal. Like the other Eph boats, the 1V started slow. But the Ephs were not rattled by their early deficit and settled into a strong rhythm. The men quickly moved past UMass and walked through Trinity with their middle move. With 500 meters to go, the men locked in on Tufts and brought their stroke rate up to 37 per minute. With their best sprint of the year, the Ephs went from half a length down to half a length up on the Jumbos to bring home the bronze. Wesleyan won in 6:08 and the men finished a fraction of a second behind Bates in 6:11 for third place.

Seven-seat Ian Pultz-Earle ’21 said that his crew’s second half made the difference. “We were down off the start, but we’re used to that so it didn’t faze us,” he said. “We stayed in contention during the first half with a sustainable rhythm and then around the halfway mark I think we sort of flipped a switch and started moving through other crews. We finished the race with the best sprint we’ve ever had.”

Co-captain Adam Zoen ’19 shared his perspective on how the team’s work throughout the season had resulted in the championship. “Our goal since the beginning of the season has been to ‘raise the average’ of everything we do,” he said. “Winning the New Englands points trophy for the first time since 2001 is an incredible culmination of the hard work that all 41 athletes on our roster have put in this entire year to make themselves and their teammates better everyday. At the same time, we realize our jobs are nowhere near done and will be doing our utmost to return to Worcester next weekend even faster for NIRCs.”

The men will close out their season back in Worcester next Sunday at NIRCs.