The Williams Record • May 8, 2019 • https://williamsrecord.com/92816/arts/ben-weber-21-directs-spring-musical-explores-post-apocalyptic-possibilities/ 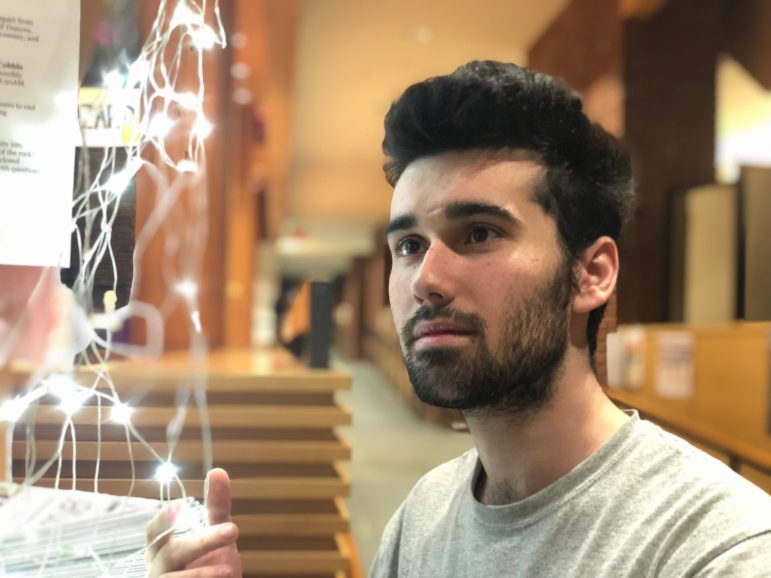 Ben Weber ’21 is a math and theatre major who has appeared in a variety of Cap & Bells and theatre department performances. Mr. Burns: A Post-Electric Play by Anne Washburnis the first play that he has directed in his two years at the College.

How did you get involved in Cap & Bells?

I got involved within a few days of being on campus – Frosh Revue used to be a part of Cap & Bells, and I was a part of Frosh Revue, so I met a lot of the people through that.

I’m the general manager for this upcoming term, which means I am in charge of a lot of logistics.

How did you come across Mr. Burns, a Post-Electric Play?

A friend of mine was talking to me about The Flick by Annie Baker, which he had read alongside Burns. I remember thinking the premise was interesting – it was this weird play about The Simpsons – but I hadn’t read the script. Then, I finally read it around Thanksgiving this year. I wasn’t planning on proposing until I found this play. The work came first – it was always about doing this play specifically. If I find another play, then, great, I’ll propose again!

What were some challenges of directing Burns?

We had a cast of 17 people, which was an unheard-of amount for a Cap & Bells show. When the theatre department puts on a play… it’s an academic endeavor to be in that play, so they can ask you to cancel your other commitments to pursue that show. We can’t do that with Cap & Bells. Another big challenge was that we weren’t in a theatre – we were in Upper Greylock. Upper Greylock isn’t designed for a stage and lighting and seats, so we had to bring that in. And since there were still yoga classes in there, we had to take down the set every night, which was… horrifying. But as a result, we designed the set to be put up and taken down within 30 minutes, which worked for a play about a traveling troupe of actors.

What are your thoughts on the apocalyptic content of the show?

The world always feels like it’s going to end. Politically, academically, or socially, there’s always something in your life that’s falling apart, and you think, “Ah, this is what’s going to kill me!” What I love about this show is that it acknowledged the fact that things might end tomorrow. You never know if someone’s elbow is going to slip and they’re accidentally going to set off a nuclear bomb and start a nuclear winter, you never know if that’s going to happen, if tomorrow’s going to happen. But the premise of the play is that we’ll still tell stories, and be human – culture is going to survive, it’s going to change, but it’s going to survive.  Yes, the apocalypse is fascinating and terrifying, but what I’m personally interested in is storytelling and the fundamental impulse to tell stories.

Who are you inspired by?

I’m definitely inspired by my high school theatre teacher. When I was a senior, I did an independent study under him. He taught me that directing is more than “you stand here, you say this then,” that it’s more a holistic experience. I also look up to the other student directors from this season of Cap & Bells – John Murphy ’21, Nadiya Atkinson ’21, Peter Knowlton ’21, Emily Bannigan ’20 – I had a good friendship with all those directors, and I saw them do it. Nadiya was giving me a lot of tips and tricks for how to make the process run smoothly. Also, the Cap & Bells board gave so much love and support, and the stage managers, Maye McPhail ’22 and Emma Draper ’22 helped make the chaos of this show into something productive.

Finally, if you had an unlimited budget, what would you try and put on?

There’s this really interesting book we had to read for one of my Theatre classes called The Empty Space by Peter Brook. My favorite chapter of his book was on “rough theatre,” which is about doing theatre on a budget. I’m personally really excited by theatre that creates something from nothing – it’s not about the budget you have. We’ve proven this year that [Cap & Bells] can do big shows, but personally I think leaning into the limitations of a small student-run organization would be interesting – just seeing where we could go with $50 and a few hours a week. That’s the type of theatre I’d like to see. Although, that being said, I really would also love to see more musicals – it’s ridiculous that Burns was the Spring Musical considering there was only singing for 30 minutes.