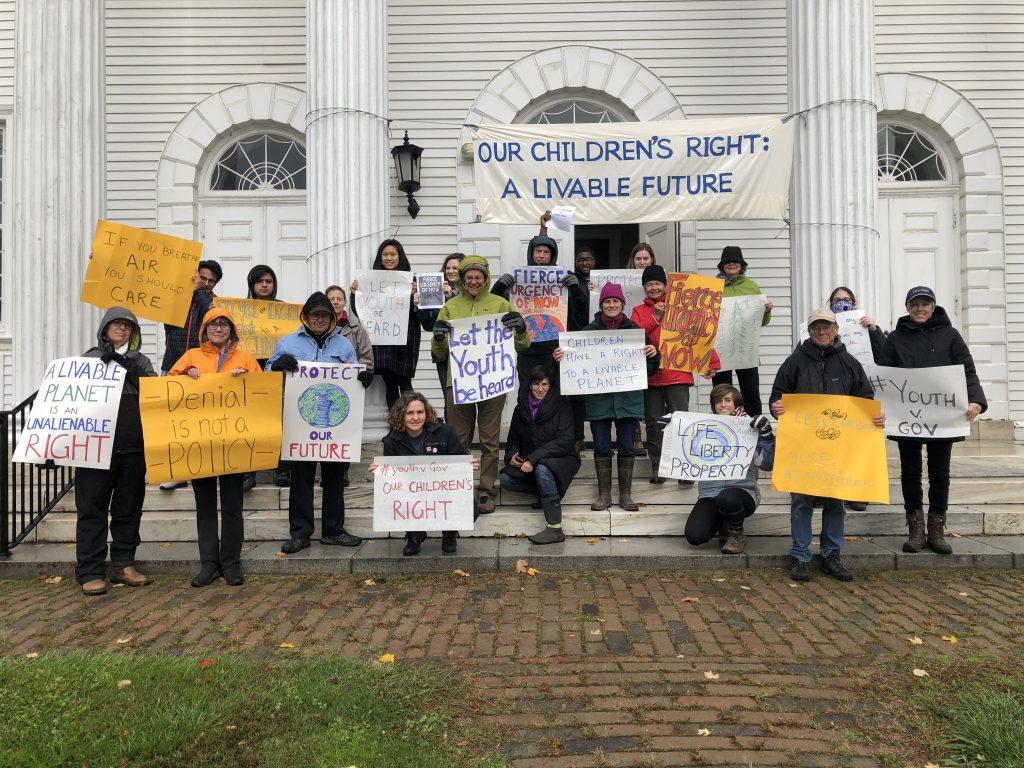 On Saturday, students and community members rallied against climate change and in support of a climate lawsuit. Shaheen Currimjee/Executive Editor.

In 1988, Dr. James E. Hansen testified before Congress that  the southeastern and midwestern sections of the United States would be subjected to high temperatures and drought in the near future. Thirty years later, climate change is still a major problem, and citizens are still using the legal system to advocate against the issue. Last weekend, College and community members took action in support of recent developments.

Twenty-one young individuals aging from 11 to 22 are suing the federal government for causing and ignoring climate change. These individuals, who are represented by the Oregon-based non-profit organization Our Children’s Trust, filed their constitutional climate lawsuit Juliana v. United States in 2015. The plaintiffs have asked the government to “prepare and implement an enforceable national remedial plan to phase out fossil fuel emissions and draw down excess atmospheric CO2,” according to their website. After three years of protesting, the trial was set to begin on Oct. 29 at the U.S. District Court in Eugene, Ore. However, the case was temporarily halted by the U.S. Supreme Court.

While the older generation might perceive the catastrophic effects of climate change as abstract, today’s children will be faced with the disastrous consequences well within their lifetimes. All of the plaintiffs in the case will be in their 30s or 40s in 2040, the year in which the United Nations expects the biggest climate change catastrophes to begin. Partners and supporters from around the country and beyond rallied their communities as a show of support for the 21 Juliana plaintiffs and the science-based national climate recovery plan they seek.

Last Saturday, students and community members from Williamstown gathered outside the First Congregational Church to demonstrate solidarity with the young people pursuing the case. The crowd marched onto the sidewalk of Route 2, waving signs bearing the words “Protect our youth” and “Denial is not a policy.” This rally was co-organized by Williamstown resident Bridget Spann, Assistant Director of the Zilkha Center Mike Evans and Williamstown Select Board Chair Anne O’Connor  ’86, as well as College students Olivia Goodheart ’19, Mohammed Memfis ’21, Phacelia Cramer ’19, Amber Lee ’21 and Mount Greylock student Cammi Macuch. A few attendees spoke on the importance of preventing climate change, commenting on the day’s terrible weather, and the benefits of implementing a climate recovery plan. They stressed that the future depends on a climate system that will sustain human life.

Goodheart and Cramer are from Eugene, Oregon, and are acquainted with some of the plaintiffs. “Showing up in solidarity with the plaintiffs demonstrates the power that these youth have in affecting change over a huge geographic area,” Goodheart said. “As a co-chair of the Feminist Collective who calls rural Oregon my home, climate change has always been a deeply personal and political issue.”

Those rallying made clear that despite the isolated location of the College and Williamstown, it is important to consider how education can be used to advocate for climate change. They argued that it is up to college students, as the academics and the privileged, to fight against self-interest, capitalist ideologies and mass corporate influences. Goodheart explained how she commits herself to educating herself and her family and friends. “I donate money to on-the-ground organizers, organize rallies and engage in civil disobedience, while first and foremost centering black and Indigenous voices in the fight for climate justice,” she said.

Memfis echoed Goodheart’s thoughts, especially in how environmental justice must be all-inclusive. “Financial means, race, gender, nationality and education levels [should] not exclude anyone as we move toward solutions of sustainability, resilience and prevention,” he said. “So, when we move forward and reshape our policies, attitudes and practices, our only choice should be to do it together.”

Lee explained how the rally demonstrated the cooperation between the College and the town. “As representatives of the College, the church and the town, we are working to recognize our position within national conversations on climate change,” she said. Having interned with an environmental non-profit organization based in Boston, Mass., Lee noticed the differences between a city affected by sea level rise and flooding and Williamstown. She is currently working on a panel targeting the “tension between current flood risks that disproportionately affect low-income folks and the College’s notorious wealth of resources.”

The Juliana plaintiffs and the rallies around the country, including the one in Williamstown, demonstrate that environmental activists are persevering in the face of Supreme Court resistance.