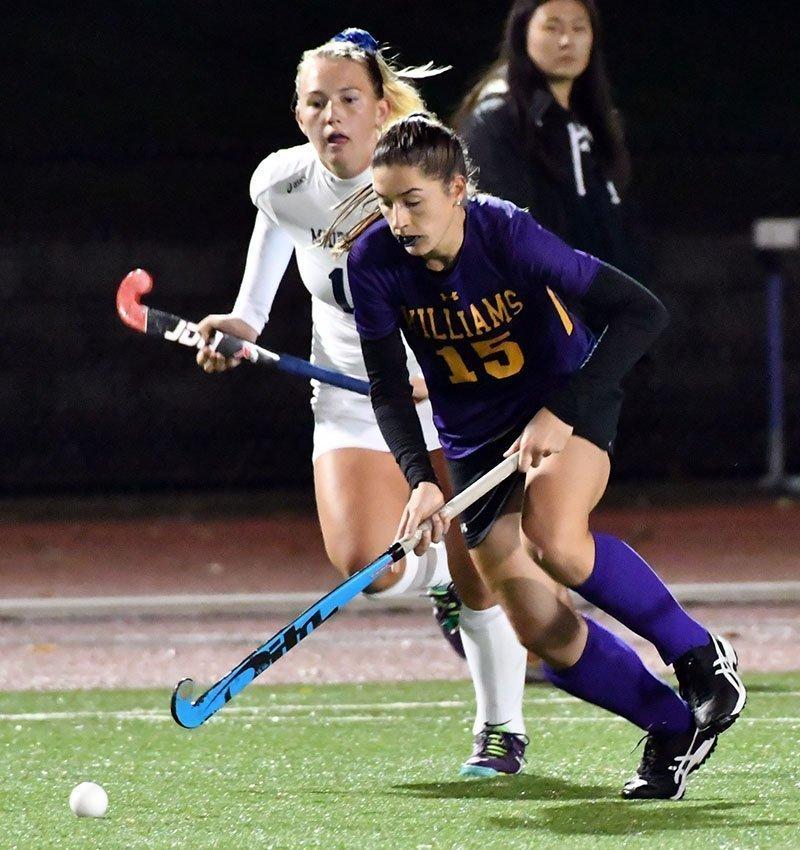 On Oct. 23, women’s field hockey defeated No.1 Middlebury 4-2 at home, vaulting the team into the third seed position as they entered the NESCAC Tournament. This past Saturday, the women defeated Bowdoin 3-2 to advance to the NESCAC Semifinals.

Last Tuesday, Middlebury had the first opportunity of the game when Grace Jennings received the ball in the middle of the circle. Jennings slid the ball towards the right side of the net, but co-captain netminder Emma Santucci ’19 dove and deflected the effort out of the circle.

The Ephs’ first chance of the game came when Elizabeth Welch ’22 found a streaking Emma Ticknor ’20, who diced her way through the Panthers defense and got a shot on net. Her shot was deflected by Middlebury goalie Megan Collins but landed back at her stick. Her second effort snuck past Collins but banged off the post and out.

The Ephs were able to strike again when Libby Dolan ’19 found the back of the net at 11:39. Four minutes later, Ticknor got a goal off of a pass from Claire Fitzpatrick ’21 at 15:37, putting the Ephs up 2-0. After the goal, the Panthers called a timeout to regroup.

The Ephs continued their offensive prowess after the timeout. Co-captain Meredith Wright ’19 dribbled down the baseline past a couple of defenders and found Ticknor in the circle who tipped it past Collins to put the Ephs up 3-0 at 18:18.

The Panthers were eager to claw their way back into this game. After a lengthy possession in the Ephs’ circle, the ball was swung back to the defense. Panthers defender Erin Nicholas drove hard into the circle and buried an on-the-run shot for the first Panther goal of the game at 22:06.

The Ephs responded with a goal of their own at 28:11. Off of a penalty corner, Isabel Perry ’20 took the initial shot, which was saved by Collins. After a scrum in the circle, the ball was loose and Ticknor got her third goal of the half.

The Ephs would hold onto their 4-1 lead until the end of the half. Abby Lloyd ’20 entered the game and took over for Santucci as the goalie for the second half. Santucci finished the half with two saves. Collins had one save at the half.

The first goal of the second half belonged to Nicholas, who scored off of some slick passing off of a penalty corner at 57:30. Emma Johns was credited with the assist. The goal brought the score to 4-2 with just over 12 minutes left in the game.

The Panthers added some offensive pressure on the Ephs with a couple of penalty corners, but the Ephs stood tall and kept the ball out of the net, keeping the Panthers two goals away.

The rest of the game was a back-and-forth between the two teams, but the Ephs held onto their 4-2 lead for the remainder of the contest. Lloyd ended the game with five saves, and Collins finished with two saves.

The last Ephs win over the Panthers was in 2009 when Ephs won 2-1 at Middlebury in the NESCAC Quarterfinals.

“I feel like we had a game plan and a strategy and we executed it to a T,” Eph head coach Alix Barrale ’93 commented after the game. “We never let up. I think that Tufts was a good game to show that when we play tough, we are excellent. I felt like in that game we played hard for one half and then we lost it. We knew we had to put 70 minutes together [against Middlebury] and we did. From top-to-bottom, everybody did their job. We moved Ticknor up, and considering she scored three goals today, I think it worked out for us. To get a win against the best team in the nation is pretty special.”

By winning this game the Ephs secured home-field advantage in the opening game of the NESCAC tournament, which began on Saturday. The women played against Bowdoin, defeating the Polar Bears 3-2 to advance to the NESCAC semifinals. Libby Dolan ’19 notched the game-winner at 66:46.

The Polar Bears got off to an early lead in the first half, catching the Ephs off-guard with an unassisted goal by Abby Bashaw at 1:56. The Eph defense came alive to push back the Polar Bears. Dolan broke through the Bowdoin defense at 6:29 with a one-on-one shot with goalie Maddie Ferrucci, but her shot hit the pad of Ferrucci and bounced back out into the circle. A foul on the Polar Bears gave the Ephs a penalty corner at 6:32, but they were unable to convert it into a goal.

The Ephs kept control offensively, putting pressure on the Polar Bear defense with two more penalty corners at 10:15 and 12:10 with a shot just wide of the goal by Wright at 12:51. Bowdoin recovered the ball around the 20th minute and rallied a couple of shots, but Santucci saved both at 20:01 and 20:12.

After a midfield battle for the ball, Dolan broke away with no defenders in front of her and went one-on-one with Ferrucci. After a swift swing both Dolan and Ferrucci fell to the ground as the ball hit the back of the net to tie the game 1-1 at 23:07.

The Polar Bears rallied quickly with a shot by Elizabeth Growney at 23:37, but Santucci turned her away. The Ephs threatened with two more penalty corners at 29:24 and 32:52 but the only shot made was from Wright at 29:50, and it went wide.

The Ephs came into the second half battling a tough Polar Bear defense and would not get a penalty corner until 43:43. Fitzpatrick took a pass from Ticknor, but her shot was turned away by Ferrucci at 44:14. Ticknor collected the rebound for another shot at 44:18, but the ball was cleared by Ferrucci again.

Another Eph penalty corner at 49:39 led to a pass from Perry to Ticknor who slotted the ball in the corner of the goal to put the Ephs up 2-1.

Play continued back and forth, both teams fighting for dominance. The Polar Bears threatened after the 60th minute with two shots by Growney at 62:32 and 64:02, but Lloyd blocked both attempts. Growney finally broke through at 65:01 and scored off a pass from Emma Stevens to tie the game at 2-2.

The Eph offense rallied quickly and moved the ball down the field on the stick of Ticknor. Ticknor made a crossing pass to Dolan who sunk the ball into the back of the net at 66:46 to put the Ephs up 3-2.

The women secured the comeback win to advance to the NESCAC Tournament Semifinals, hosted by Middlebury this weekend.

“That first goal put us back on our heels, but we responded well and controlled offensively after that which was huge,” Barrale noted. “We had to fight through a tough Bowdoin defense, and Libby Dolan finished big for us. Marissa Feller ’22 was rock solid for us on defense and stepped up to the ball. We’re excited to see what’s ahead for our team.”

The women’s face Tufts next at Middlebury at 1:30 p.m. on Saturday.