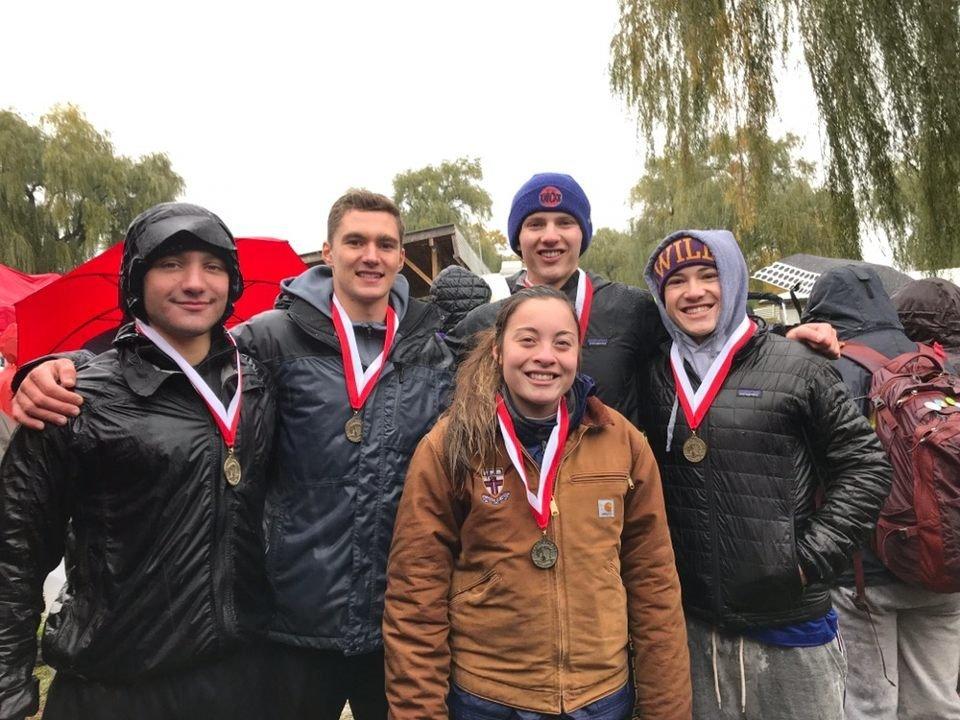 Men’s crew braved the cold conditions of Fish Creek and the 4+ “B” boat (above) took home silver. Photo Courtesy of Sports Information.

The men’s crew team traveled to Fish Creek in Saratoga Springs, N.Y. to close out their season at the Head of the Fish regatta. The weather was frigid with heavy rain and wind that continuously picked up throughout the morning. Because of these conditions, afternoon racing was canceled and only the Williams fours and novice eight were able to row.

The men entered a true novice boat consisting entirely of athletes who learned to row at Williams. Recruited first years all rowed in the collegiate fours event and were thus unavailable for the novice eight.

In the race, the novices demonstrated great mental toughness under trying conditions, revealing their  progress since the beginning of the season under the tutelage of assistant coaches Graham Marks and Ben Bradshaw during the fall. The young Ephs built into a strong rhythm as they blasted under the bridge at the starting line.

Although struggling with inconsistency at times, the Ephs always managed to regain their rhythm and power ahead. Williams ultimately finished seventh out of 25 entries with a time of 11:18.

Novice coxswain Margo Berman ’22 was proud of how her crew handled itself. “We went fast,” Berman said. Five seat Bernal Cortés ’22 shared the sentiment, noting that the crew’s rhythm and placement felt “silky.”

Due to extreme weather conditions, organizers did not follow the traditional starting order used in head races. Instead boats were sent off as soon as they arrived to the starting line, leading to uneven starting intervals and a hectic race.

The “A” entry started first, and showed great poise in their race execution. Williams attacked the course from start to finish, laying down a well-executed consistent piece. The Ephs finished third overall with a time of 11:24.

The junior boat (“C” entry) was the next to arrive to the starting line. The crew started well behind the previous crews but set out with aggression. Through the first half of the race, the crew worked to sync up together and found their rhythm as they came around the bend in the second half. With a mile to go, the crew had a strong move, pushing first through Amherst “A” and then LeMoyne College as they launched a strong sprint into the finish. The juniors took home gold for the “C” entries in a time of 12:05.

In hot pursuit of the juniors was the Williams “B” boat, which started shortly after. As Williams “C” picked off crews, Williams “B”  stayed hot on their tail. Coming into the final straight, the rowers pushed themselves to the limit with a ferocious sprint, finishing promptly behind Williams “C.”  Williams “B”  took home silver for the “B” entries with a time of 11:28.

Finally, Williams “D” came out and showed great adaptability in their first time rowing together in this lineup. They too were able to find strong connection and rhythm in an unfamiliar lineup and battled hard down the course. They finished in a time of 12:15, good for silver out of the “C”  entries and second to Williams “C” .

Michael Nettesheim ’20 thought that the team accomplished what they set out to do with the regatta. “We went into the race today thinking of it as an opportunity to really solidify what we’ve been working on technically and mentally all fall,” said Nettesheim. “It was our last [time] on the water row before going indoors to the ergs for the winter, so we wanted to have both some fun and really show ourselves the product of the work we’ve done… when it came time to get racing we ended up medaling in a bunch of events.”

In total, the men brought home four medals from five boats – one gold, two silvers and one bronze.

The Ephs will return to Lasell Gym for the winter, where they will focus on fitness training throughout the winter to prepare for their spring racing.

The men will be back on the water over spring break during their annual trip to Myrtle Beach.