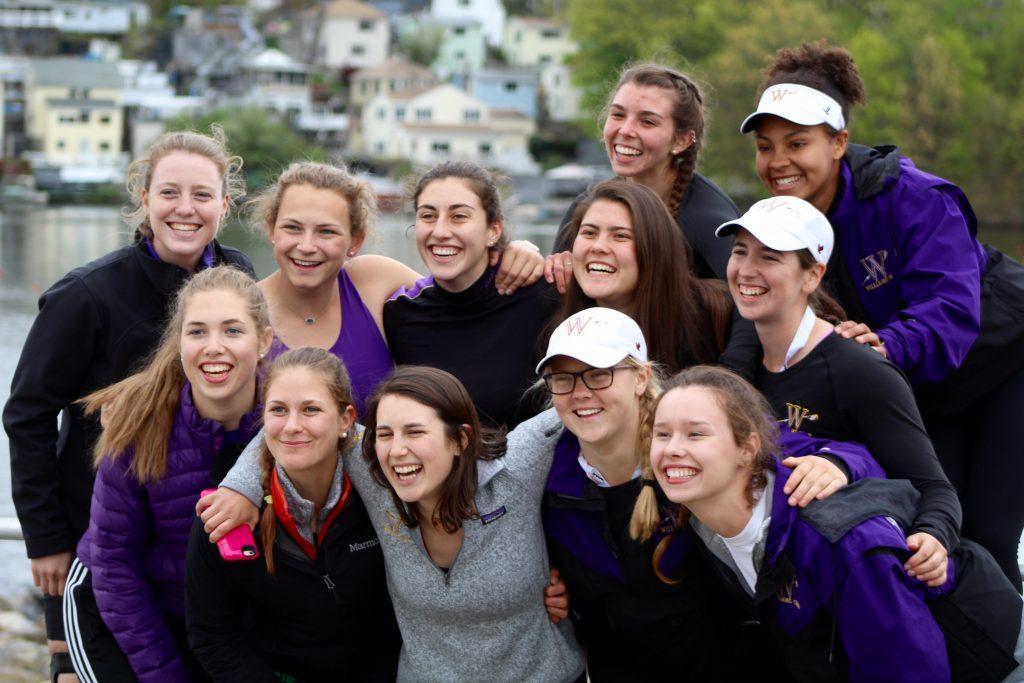 Notoriously record-breaking, the women’s crew continues to push boundaries in pursuit of athletic greatness. Most sports teams have one, two or sometimes as many as three captains. This year, the women’s crew team has outdone themselves by electing all ten members of their senior class to serve as captains on a “senior leadership council.”

Last winter, when considering who to elect as team captains for the following year, the junior class (this year’s seniors) realized that they “couldn’t imagine only one or two of us shouldering all of the responsibility of a captaincy,” coxswain Ava Palmo ’19 said.

“In previous years, we have seen captains getting overwhelmed or isolated from other seniors because of their unique responsibilities,” Harper Johnson ’19 explained. After much consideration, the class came up with the idea of a “senior leadership council,” in which all 10 seniors would share the duties of captaincy.

“It started to seem like the perfect way to pool all of our strengths and support each other through the weaknesses,” Grace Chamberlain ’19 said.

That spring, the class of 2019 pitched their revolutionary idea to their coaches. “They were very organized,” head coach Kate Maloney recalled. “They had the pros and cons and created a very good reason why it might look like something that could be successful.” Maloney is “always up for trying to see leadership through different lenses [and happy] to work with athletes on the team to make the best environment for everyone.” She and assistant coach Meg Conon have supported the senior class in their shared leadership. “I think they felt like the sum of them and their experiences and their leadership qualities was greater than the parts,” Maloney said.

The unconventional system makes leadership more accessible to underclassmen – sometimes a challenge on a team of more than 40 women. “We wanted the underclassmen to feel like they were part of the decision making process,” Diana Mattheisen ’19 said. “We felt that if we had 10 people who all had different connections and friendships within the team, we would be able to hear more opinions and voices from different team members.”

Through the new system, the seniors aim to set an example for their younger teammates. “A major part of what we’re trying to do is show that anyone can lead, regardless of what year you are, what boat you’re in or how loud your voice is,” Eileen Russell ’19 commented.

Collaborating with nine other people to lead such a large team is, as one would expect,  difficult. “It can be a challenge to try and pull something apart, dissect it and put it back together within the span of a 50 minute meeting,” Maloney said. The seniors tackle these challenges the same way they tackle their sport – together, with strength, love and trust. Even if the whole group can’t make it to a meeting, “we all show up when we can and are constantly staying in contact via GroupMe and text,” Palmo explained. When communication is truly impossible, each member trusts one another to lead without them. “Countless hours spent as teammates and friends have allowed us to really trust one another and know that we all have each other’s interests in mind,” Russell remarked.

“I trust my class to make the right choices for the team if I can’t make a meeting or weigh in on a conversation,” Chamberlain said, agreeing.  Always up for a challenge, the coaches and seniors have not let these difficulties stand in their way. “It requires a lot of compromise and a lot of time and a lot of love,” Russell explained affectionately. “And they make it work.”

Looking back on this fall’s season, the captains credit the success of their shared captaincy to the unique culture of their class. “Our class has always worked well together and we are all motivated to cultivate a good team atmosphere,” Johnson said. The group is incredibly committed to the well-being of their team. Chamberlain believes that the council has worked so well because “we all seem to really want to make it work because we care so much about this team, and we also have so much trust in each other.” It also helps that they are very close. “It isn’t hard to lead together because my co-captains are my best friends,” Palmo admitted.

In the meantime, this year’s seniors continue to share their leadership in a way that truly reflects the character of the team as a whole – a group of strong women who work with one another, for one another, out of love and commitment to excellence.