The Williams Record • May 1, 2019 • https://williamsrecord.com/86260/sports/mens-lacrosse-advances-to-nescac-semifinals-after-win-against-colby/

Men’s lacrosse advances to NESCAC semifinals after win against Colby 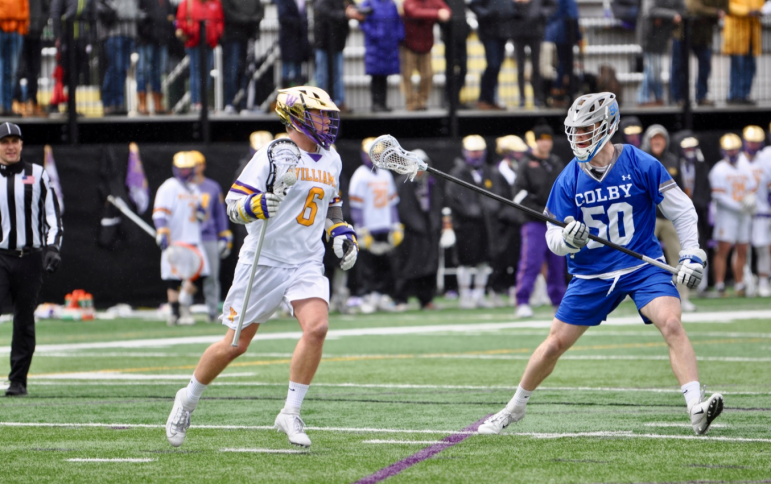 Cory Lund ’21 has recorded 50 goals and 20 assists on a 42.0 shooting percentage this season. Photo courtesy of Sports Information.

Cory Lund ’21 has recorded 50 goals and 20 assists on a 42.0 shooting percentage this season. Photo courtesy of Sports Information.

No. 8 men’s lacrosse (14–2, 8–2 in the NESCAC) defeated Colby 12-9 in a NESCAC tournament quarterfinal matchup on Saturday. The third-seeded men will take on fifth-seeded Amherst in the tournament’s semifinals next weekend.

Saturday’s triumph makes the men the winningest team in the program’s 91-year history, with 14 victories over the course of the 2019 season.

With 50 seconds left in the quarter, Kevin Stump ’20 passed the ball to Jake Haase ’22, who slam-dunked it into the net to give the Ephs a widened lead of 3-1 at the end of the first quarter.

With 14:07 left in the second quarter, the Ephs tacked a goal onto their lead after Jared Strauss ’21 shot into the top left corner of the net. The Mules countered a minute later, making it a 4-2 game. With 8:35 remining in the half, Stump gave the Ephs back their three-score lead after burying one into the net on a feed from Lund. Only 30 seconds later, Lund scored a goal off an assist from Hincks  after a clear from Rock Stewart ’20.

After a Colby timeout, the Mules scored again, decreasing their deficit to three scores. With 2:38 remaining, Stump scored his second goal of the game, which was then countered by the Mules. At the end of the first half, the Ephs led 7-4.

The Ephs took the field in the second half with the same pace of play and offensive poise they had displayed in the first 30 minutes. With 13:29 left in the quarter, Stump scored his third goal of the day after a feed from Lund to bring the game to 8-4. Two minutes later, Stump netted a second-straight goal, increasing the Eph lead. With 9:15 remaining, Strauss ’21 slam-dunked the ball and drew a penalty to give the Ephs a man-up opportunity. The men were unable to capitalize on the advantage, and Colby scored with 2:19 left. The Mules were down 10-5 going into the final quarter of play.

Colby netted the first two goals of the fourth quarter at 10:05 and 8:24 remaining, respectively. With 5:14 left in the game, the Ephs broke the Mules’ scoring streak after Hoffman ripped one unassisted with a successful dodge from the restraining line. The Mules then netted two consecutive goals to reduce the Eph lead to 11-9. This was countered 25 seconds later, by a dunk from Haase which secured the Ephs’ 12-9 victory.

The Ephs were led by Stump with four goals and one assist. He was followed by Hoffman with three goals and two assists, as well as Haase and Strauss who both had two scores. Lund also had one goal and four assists. Eph goalie Harry Gahagan ’21 had 14 saves over the course of the game.

“Colby was a tough team, and I am happy with our effort and execution to secure a first-round win,” Eph head coach George McCormack said after the game. “We’re looking forward to an awesome play-off run.”

With the win, the men advance to the semifinals of the NESCAC tournament and will play fifth-seeded Amherst, who topped fourth-seeded Bates 23-9, next Saturday at 3:00 p.m. at Tufts in Medford, Mass.