One in Two Thousand: Justin Gunn ’22 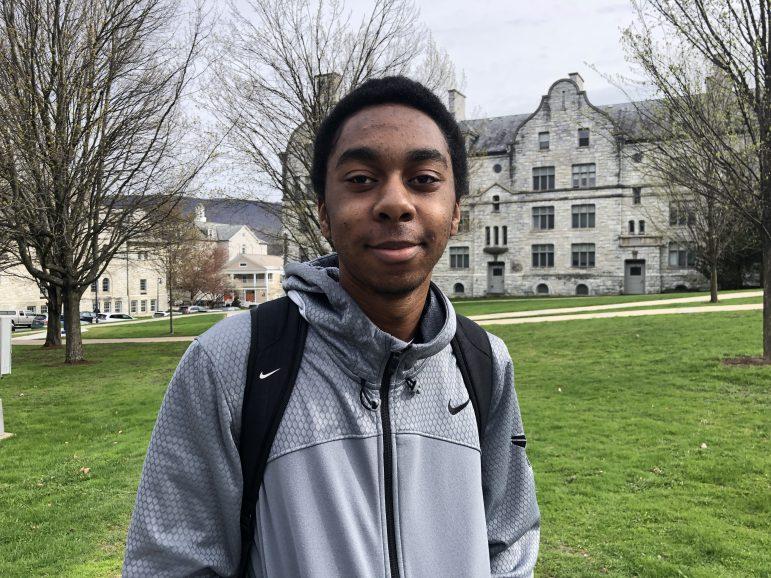 Sofie and Justin are entrymates in Willy AB, but they truly bonded when they got attacked by wasps during their WOOLF trip. Kenia and Justin met when they were paired as tutorial partners in PSCI 291T: “American Political Events” this spring. We caught up with Justin at Tunnel City Coffee to talk about wholesome memes, his love of Waffle House and his favorite dog hat.

KC: Why did you decide to make a wholesome meme page? How do you choose your memes?

JG: I just started it, and it’s kind of fun. People were like, “I like them,” so I kept doing it. I get all of my memes online.

KC: Why do you think people like wholesome memes?

JG: Because it makes them feel good.

KC: What is your favorite wholesome meme?

JG: I don’t really have one. Though, in terms of regular memes, the Kermit the Frog memes are my favorite.

JG: Imagine Kermit the Frog saying some, like, messed up stuff. There was one where Kermit had a gun and was trying to break into this guy’s room… That was pretty funny.

SJ: I know that you are considering moving into the “sad boi” meme territory, with a new account. Can you tell us about that?

JG: Well, obviously, you can’t always be a happy boi. Sometimes, you need to be a sad boi.

KC: What would you name it?

JG: Right now, my account is “JFinesse,” so it would be “GFinesse,” because my last name is Gunn.

SJ: One of your Instagram posts says that photos of yourself are typically the most liked. Why do you think this is?

JG: Why are you stalking me?

SJ: Would you say that you prefer memes over Vines?

SJ: So Kenia and I are both from New England, where we don’t have Waffle House. Can you explain the allure of Waffle House?

SJ: Is Waffle House one of the things you miss most about home while at Williams?

JG: Probably. I mean, I miss everything because there is nothing here.

KC: I’m not going to argue with that. So, I hear you like to go on walks.

SJ: Yeah, one of my favorite things about you is that you are always down to walk a friend anywhere they need to go on campus. Some would say that you actually created the “Walk and Talk,” not Aaron Sorkin.

KC: What’s the most surprising thing you’ve seen on a walk?

JG: I ran into my econ professor’s dog. The dog was messing with a kid, and then the kid ran away. The dog ran after him, and he knocked over the kid. Then, the kid fell over, and the dog sniffed him. It was sweet.

SJ: You’ve said before that tasting a Goodrich bagel influenced your decision to come to the College. Tell us about that.

JG: I was at Previews – it was Doddrich. I got a cinnamon raisin [bagel] with honey walnut [cream cheese], which is my go-to. I teared up a little bit while eating my bagel; it was really good. I was like, “This is the best thing ever. It tastes amazing!” Now I go to Goodrich every Monday, Wednesday and Friday.

KC: What were your first impressions of me during tutorial?

SJ: I know you’re on the Williams Fencing Club. Tell us about it.

KC: Oh damn, you fence. What’s your weapon? [For those who don’t know, there are three weapons – epee, foil, sabre – and foil is the best.]

KC: We can’t be friends anymore.

JG: Oh, are you one of those people?

KC: If you mean a foilist, then yes.

SJ: As your first year winds to a close, what is the most surprising thing you have found out about the College?

JG: I feel like a lot of people here know me, but I don’t know them.

SJ: Your Facebook profile photo is pretty revolutionary, in that it is just a photo of your Williams ID card. What inspired that?

JG: I don’t really take pictures of myself, and I needed a photo for Facebook. So I just put a photo of my ID.

KC: I saw from your laptop case that you play Super Smash Bros. Melee. What are your thoughts on that game?

JG: I despise Melee with a passion.

JG: Because I suck at it.

SJ: The introduction of your dog hat was one of the most iconic fashion moments of the 2018–19 school year.

JG: Is it really?

SJ: Yeah. Tell us about where you got that hat.

JG: At the [First Congregational Church] Tag Sale in the fall.

KC: Was it love at first sight?