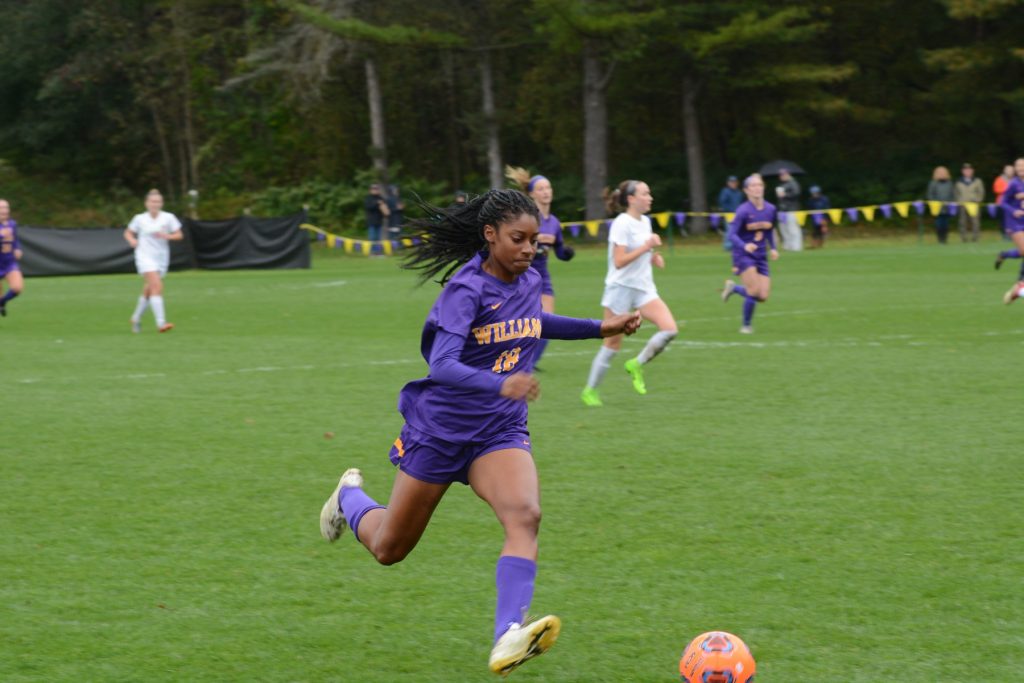 Sydney Jones ’21 scored her ninth goal this season, helping the Ephs take the lead in the 81st minute. Photo courtesy of SPORTS INFORMATION.

Women’s soccer (13-0-2, 9-0-1 in the NESCAC) struggled to score early on. In the first half, Jumbo forwards Alessandra Saddler, Liz Reed and Sophie Lloyd dominated midfield and created havoc for the Ephs inside the penalty area.

In the 24th minute, Sadler sent a cross into the goal box, which was headed by Reed. The ball deflected off tri-captain goalie Olivia Barnhill ’19 and went in the net after an attempted clearance by Nkem Iregbulum ’20 – however, the referee waved the Jumbo goal off.

The Ephs had a great scoring opportunity in the 18th minute. After the ball rolled outside the penalty area off a clearance, Aspen Pierson ’21 rattled the left post with a booming shot. The ball ricocheted to Georgia Lord ’21, who had an open net but skied the ball high.

In the second half, play settled at midfield, an indication that the Ephs had recovered some momentum. Still, Tufts had the advantage after earning a number of corner kicks early in the half. The Jumbos failed to find the header, but their corner kicks were too close for comfort.

In the 81st minute, Sydney Jones ’21 received the ball at midfield, clipped a pass to Pierson and then evaded her defender. With the duo sprinting up-field, Pierson sent a brilliant pass to find Jones on a breakaway. Jones had a step on her defender, forcing Tufts goalie Emily Brower to rush forward to block the shot. However, Jones struck the ball by Brower, netting her ninth goal of the season.

Tufts had the advantage in shots on goal (13-7) and corner kicks (6-2). Barnhill had four saves to post a clean sheet. Brower had two saves and one goal allowed.

Meanwhile, men’s soccer (8-5-2, 4-4-2 in the NESCAC) lost to Tufts, the No. 1 seed in the conference. The Ephs came into the match in the midst of their best stretch of the season, but their five-game unbeaten streak came to an end at the hands of the undefeated Jumbos.

Braun, who was relentless and seemingly everywhere at once, recorded two more shots within the next five minutes, but both were saved by Schein. A 14th minute strike from Jumbo midfielder Zach Lane hit the crossbar and bounced out of bounds.

The Eph defense stepped up for the remainder of the half and somewhat neutralized the Jumbos, but that unfortunately was only temporary. Braun extended the Jumbos’ lead to two on a fast break in the 56th minute. Braun ran onto a wonderfully placed pass, took one touch and curled it past Schein.

In the 75th minute, Tufts midfielder Zach Trevorrow crossed a ball into the box that was headed by teammate Mati Cano right into the arms of Schein. However, Schein was behind the goal line when he saved the shot, quickly turning what was a terrific stop into a three-score lead.

The day’s scoring was completed with a 78th minute goal from Justin Adams ’21, who poked the ball in from the middle of a point-blank range scrum. Adams gave the Ephs their first point of the day.

Both men’s and women’s soccer finished their regular seasons by hosting Middlebury on Tuesday. The women won another close match 1-0 on a free-kick goal from Pierson, culminating another successful NESCAC slate for the women. The men fell 2-0 to the Panthers. The teams will next play in the NESCAC tournament, with the women currently ranked first in the conference.