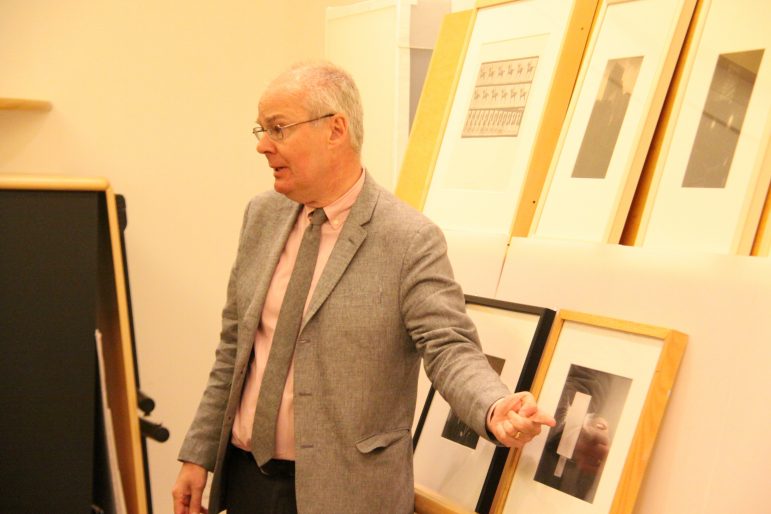 Minutes after news of the fire at Notre Dame Cathedral in Paris, France started to gain international attention, Professor of Art Michael Lewis sat down to write. Still relatively new to his role as architecture critic for The Wall Street Journal, Lewis had simply visited and reviewed various newly opened buildings and arts spaces for his previous pieces. This piece, however, was different – the deadline was just a few hours away. But as a leading architectural historian, and with the knowledge that art and architecture are deeply interrelated developments within a culture, Lewis was well prepared. We sat down to discuss his writing process, his time teaching criticism and the challenges of criticism in the digital age.

Nigel Jaffe: What does your reviewing process look like, on a day-to-day level?

Michael Lewis: The process really begins when you go to the thing that you’re reviewing. I think it’s good to go in with a preconceived notion and find yourself wrong – your best ideas come when you’re fighting with an earlier prejudice and you’re overturning it. Right away, you may have six, eight or 10 different ideas, but a review has to seize you by the lapels in the first paragraph and say, “This is surprising,” or “This is important,” or “This is disastrous.” The nature of architectural criticism has changed, in that you used to have a more leisurely pace. Because of bloggers, whose pieces come out the day the building opens, there’s a pressure to have your review appear online the night before, and then in the paper that day.

NJ: I guess that makes you almost a blogger yourself. What makes criticism different?

ML: I consider blogging to have no literary merit. I think the quality that elevates something into the realm of criticism is a certain thoughtful detachment, expressed in essay form, while blogging is generally talking. What goes into criticism is that there is no one formula for it. You could judge a building on a whole variety of criteria. For example, is it novel? Does it sizzle? Does it stagger you when you see it? Is it beautifully composed like a gorgeous piece of sculpture? Is it intelligently planned so the paths of circulation are gracious and clearly marked? Does it solve the peculiar problems of site, location, budget and materials? Does it introduce an innovative form of construction? Does it express the personality of the architect? Your first job in answering these questions is to find out where the action is. You could judge any building by how good its ventilation is, by its lighting system, how durable it is, but that doesn’t make for a pleasing essay. In any building, there is some pivotal issue where the action is: the urgent thing that deserves comment. And sometimes there’s two. Sometimes it’s a trade-off, where two considerations might be in conflict; your principal task in writing a review is to identify what the salient issue is for that building and to get people interested in it, because some of the issues aren’t that interesting. Unlike any other work of art, a building is always a social act. Composing a piece of music, or doing a painting or writing a book can be a purely personal act. But because a building begins with a client, and takes real estate from the limited pool of real estate in our world, it’s social.

NJ: How has your work been influenced by what you’ve learned in your class on criticism?

ML: One thing I’ve realized is that we forget the things that affected us about architecture when we were young. That is, the tactile experience of crawling around on your belly, the smell of closets and carpets, the things you touch with your grubby fingers. I’ve learned from my students to look back at your emotional, physical, kinetic response to buildings. One of the reasons our buildings have gotten progressively more sterile and less physically rewarding is we’ve lost touch with the primal tactile experience of architecture, and that is what I got from those student papers.

NJ: What are your plans for the future?

ML: I suggested to my editor that, in the months ahead, I want to deal with the problem of celebrity architecture and also deal with the transformation of architecture by computers – that is, digital architecture. A friend of mine said that all critics come in one of three categories: topographers, cheerleaders and goalies. The topographer, with detachment, is a neutral describer of the scene. They’ll say, ‘Here’s the lay of the land.’ The cheerleader endorses a movement, or a style or group of architects, and pushes on. They’ll say, ‘This is the future.’ The goalie is the person with the highest aesthetic standards, who doesn’t want to let anything get by.

NJ: Which one are you?

ML: I don’t know yet. I think I’ve got all of them in me. The question is more about what we need to do now. I think we need better cheerleaders. I want to be a cheerleader, but I’m afraid I’m a goalie: not good enough. I don’t yet have a reputation of being a nasty reviewer. I haven’t had a chance yet to truly lambaste a building. The fact is, for everything I write, I realize a week later what I should have said. We just need something to cheer for. That’s the question.