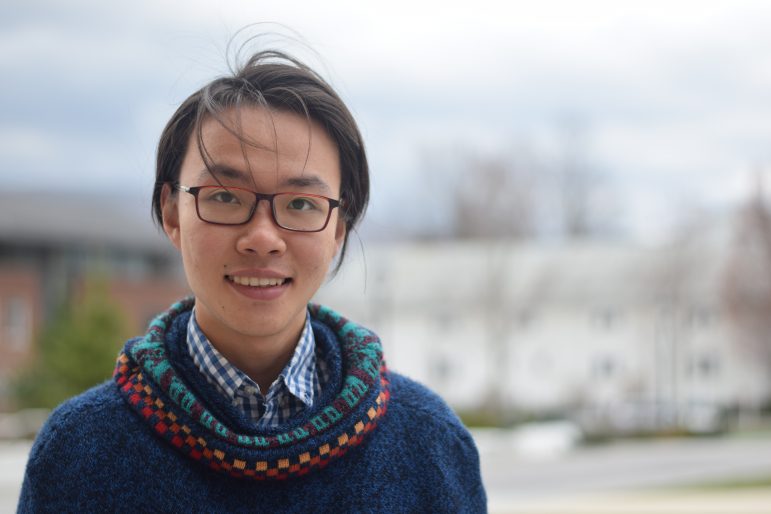 The presence of Benny Weng ’22 is like a calm and gentle breeze. He relishes in the moment, lingering in spaces with grace and poise. He nevertheless swears gorgeously – as when telling me about his experience biking to Amherst at night in the rain – and critiques students’ sense of style. Yet every time I see Weng on campus, I have been greeted with unwavering kindness, exemplified by his bright smile.

I interviewed him right outside the dance studio, where Weng spends a significant amount of his time rehearsing for Kusika. This semester, in addition to his participation in the dance ensemble, he is taking five and a half classes (the half being violin lessons). When we sat down, he immediately took off his shoes – comfortable-looking Crocs slippers – and crossed his legs.

“Tell me about your fashion,” I said.

“What kind of question is this?” he replied, laughing.

“He’s always put together, not exactly sharp, but definitely well dressed,” Mackenzie Grace ’22, who was sitting next to us, interjected.

“You don’t shy away from bold color or color choices,” Grace added.

To Weng, an outfit means “a combination of a set of things that, when put together, will make me feel happy and confident.” He noted that “color composition is definitely something super important,” as was texture, which he argued could never be too “complicated or redundant.”

Weng mentioned that he thinks everyone has been told certain fashion advice – “set experiences by other people” – dictating what clothing is to be avoided or to be worn.

“I feel like those rules are [meant] to be broken – not dogmatically – but there isn’t any reason to stick to those if you don’t feel like it,” Weng said. He never wants his outfits to be boring; rather, they should be representative of his artistic expression.

Art has a large influence on his fashion choices. “When I paint, I have a palette that I normally use: cerulean, purple, orange, lemon-yellow, cobalt blue, viridian hue,” he said. These colors inspire his outfits for each day. Other artists serve as a guide for him, in terms of “color combinations and colors.” When asked if his clothes themselves were an art piece, Weng laughed, saying, “No, that’s too much!”

He said he generally does not care what people perceive from his style; he needs only himself to feel confident in his outfit. His favorite piece of clothing is overalls. “They sort of break this boundary between the top and bottom, this preestablished duality between shirts and trousers that’s super boring,” he said.

Weng is less than positive about the style at the College. “Since I came to campus, I’ve seen so many things I’d never wear,” he said.

“Sports caps,” he said. “They look stupid. And I wear sweatpants only when absolutely necessary. And tank tops. They’re vulgarly casual.” He paused to think before continuing, “I associate them with overflowing masculinity. I don’t appreciate a lot of the expressions of masculinity.”

“So, is your style feminine?” I asked.

“No, my style is … more aloofness, nonchalance?” he said.

Weng is at once humble and bold, thoughtful and casual (although he probably would not like all these dualisms). And to top it off, he has interesting summer plans: He will be working on identifying exoplanets, planets outside the solar system. This is perhaps a fitting topic of study for Weng. After all, his style, like the exoplanets, exists a little bit outside of our world.