One in Two Thousand: Kene Odenigbo ’19 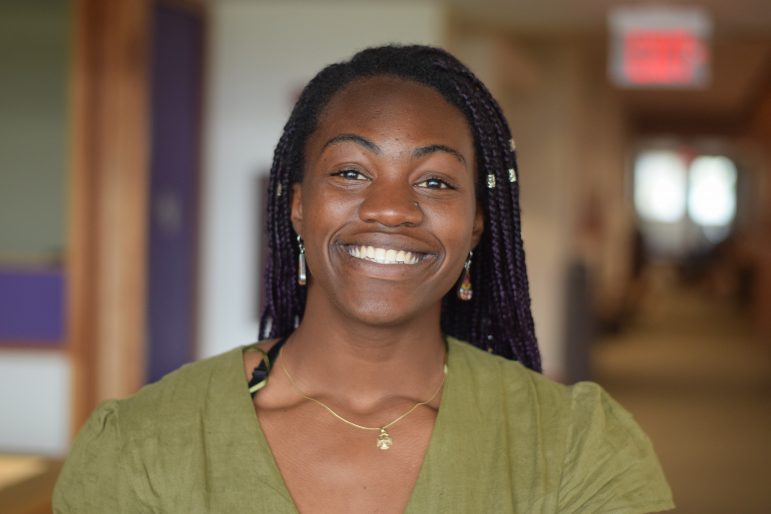 Kene and I met in physiology last spring and have since taken several classes together. She is a wonderful listener, scholar and baker. While sitting outside of Paresky on Sunday morning, we discussed her many homes, her favorite recipes and more.

Brooke Horowitch: Could you tell me a bit about your different homes and what they mean to you?

Kene Odenigbo: I’m technically from Nigeria  – my citizenship is Nigerian, and both of my parents are from there, but I was born and raised in Uganda. I lived there for 10 years, then moved to Israel for about a year, then moved to New York for two-ish years, and back to Israel for five months. I went back to Uganda for that summer, and then New York for high school, and now I’m here.

BH: Why did you move so many times?

KO: My mother works at the U.N. The reason that we were in Uganda in the first place is because my dad used to work for the U.N as well. When we moved to Uganda, he became an engineer instead. Then my mother started working for the United Nations in Afghanistan and a couple of places that weren’t family duty stations. But Israel is a family duty station, so she went there at the same time that my dad got a project in Liberia. My brother was in boarding school at that point, but my sister and I were pretty young, so we went with my mother to Israel. Then she got a temporary post in New York, so that’s why we were there for two years. When it ended, we went back to Israel. Then she got a post in Santo Domingo in the Dominican Republic, but before we could go, she got a permanent offer in New York, so she took that.

BH: What was special about each of those places?

KO: Uganda is where I grew up, so it’s definitely the place that I’m most familiar with. I went to international schools there in Kampala, which is the capital city. As you got older, you could start going on international trips, so we went to Egypt, Greece, Mauritius and places like that, which was really fun, and taught you a lot about being a person in the world. Because it was an international school, you had every type of person there, so Uganda was a special place. I was very comfortable there.

Israel was interesting because most things were in Hebrew, so you go to the store and are like, “Okay, I hope this is what I think it is.” My sister and I went to an international school again, so it was in English, and I started learning Arabic before switching back to French, which I had learned before. So Israel was a fun interlude. It was pretty, and I really liked our landlords, who lived right above us. The bakeries were also amazing. I was a big fan of the baked goods there.

But then we moved to New York, and New York was different. It was the first time I saw snow. I was super excited, but then I touched it and realized it was cold, and I was over it very quickly. It was also the first time I saw squirrels – everywhere. I had never seen them before. That was an interesting middle school experience because I came in during the middle of the year, and everyone was in cliques. I was like, “I thought this was just in movies.” So I was in a weird middle-ground area, but when everyone got kicked out of their groups, they would come to me, and I was fine with that.

When I went back to Israel, I went to a different school, and … I made some really, really good friends for the five months that I was there.

BH: You mentioned that you liked the Israeli baked goods, and I know that you enjoy baking. Could you tell me about how you started and your favorite recipes?

KO: In high school, it was tradition to bake for your friends on their birthdays, so I needed to learn how to bake. My mother had baked a lot before she got super busy with work. She used to make a Christmas cake and this chocolate cake that my brother absolutely loved. She was an amazing baker, and I really missed it when she stopped baking, so in high school I wanted to learn to bake like that. You start off with the basics like brownies and chocolate chip cookies, and I was like, “This is kind of hard.” But then I got into cakes, and there is this one apple-coffee-crumble cake, and that was my first recipe that turned out great, so it is one of my core recipes – definitely one of my favorites to make.

I could never get cookies down. I put them in a ball, but they just never spread. When I came to Williams, there was a shortbread cookie recipe that I found, and I really like it. Also, I really like this peach cake. It is so simple and moist and soft. My mother always says, “For any recipe that you’re doing, cut out half the sugar,” and it always still tastes good.

This past summer, when I was here, we went strawberry picking as a lab. I actually don’t like strawberries that much, but I like strawberry flavored things, so I made jam. And then I thought, “What am I going to do with this jam? I don’t have bread.” So I thought of those cookies that have jam centers and found a recipe, so that is also one that I love.

BH: In addition to your biology major, I know that you are on the pre-med track to become an OB-GYN. What interests you about that field?

KO: I really like babies; I think they’re so cute. But also, I was set on being a neurosurgeon for a long time, but when I found out the residency was seven years, I was like, “OK, that’s a little much. Maybe just general surgery,” because I really wanted to be a surgeon. And then I shadowed a general surgeon for two days, saw three colonoscopies in a row and almost fell asleep. That’s when I knew it was not for me.

It was the SPEC 19 program when I shadowed these doctors, and I got matched with OB-GYNs. At first, I was like, “Why would I watch this?” But I loved it. The OB-GYNs were wonderful and so kind and so willing to teach and answer questions. The reason that I don’t want to go into research is that I really like the human aspect of medicine, talking to people and having a direct impact on their lives. With OB-GYN, you can make connections with people because you see them every year, or more often if they are an expecting mother. So you really get to form bonds with them and help them through tough periods in their lives. I just think that’s amazing.

BH: That’s awesome! You are going to be such a wonderful doctor. This is a non-sequitur, but how did you get involved with the track team, and what do you like about it?

KO: I got into track freshman spring of high school because I decided that I really like to eat, so I need to do some sort of exercise. Since I have no self-motivation, I need someone yelling at me to go run. I figured that track seemed fun, and I was pretty fast, so I thought it would be fine, but honestly, I hated it in high school. I liked jumping, though, and I liked winning, but there wasn’t much of a team atmosphere there.

But at Williams, my teammates are incredible. I just love my team and my coaches and actually enjoy coming to practice. The workouts make sense, and the jump squad is such a great group with so many mentors. There is definitely a pay-it-forward attitude on the team, and the coaches are so kind and actually care about you as people.

BH: I’m glad that you’ve had such a great experience here! I have one final question. I think that you have the most reassuring presence, and since you’re graduating soon, I was wondering if you have any advice for Record readers.

KO: I think in general, and this is such an easy thing to do: Just be kind. In being a Junior Advisor and captain – people come to you with the craziest stuff in their lives, and you never know because they are so good at putting up a face. People are having a tough time as it is, so be kind and don’t judge. Or at the very least, don’t be a dick. And believe in yourself. Everyone is here for a reason.