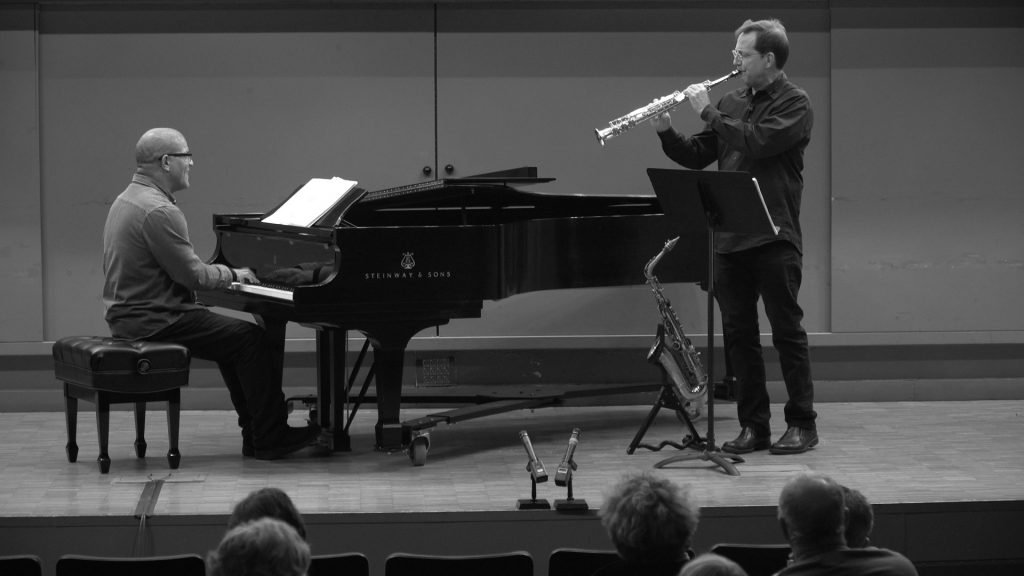 In short opening remarks from WCMA director Pamela Franks and Deputy Director for Curatorial Affairs Lisa Dorin, the audience learned of the Plonskers’ initial trip to Cuba in 2002, which sparked their interest in connecting with emerging artists. The Plonskers were struck by the collaborative and entrepreneurial nature of creatives in Cuba, and this fascination ultimately led to the fruition of the lecture.

The program was kicked off by saxophonist Leonard and pianist Nuñez, who took to the stage to perform a series of jazz-tinged duets. Leonard would often step back to let Nuñez –  a world-renowned pianist, composer and music director from Havana – take the reign. This was Nuñez’s first time presenting his music in the U.S. The duo seemed to have a strong mutual understanding, rendering the compositions almost as a conversation in certain parts – each instrument crafting a response to the other.

Following this musical interlude, Siré approached the stage to play a short but illuminating video clip, which gave a simple description of the Cuban phenomenon of El Paquete Semanal, or “The Weekly Package.” For over 50 years, informational isolation and inaccessibility to basic resources and goods have characterized daily life in Cuba; El Paquete, a reaction to this, is a one-terabyte collection of digital material distributed since around 2008 on the underground market in Cuba as a substitute for broadband Internet. El Paquete contains a vast swath of content, for example: TV series, films, soap operas (Korean soap operas are currently popular), documentaries, music, video clips, reality shows, graphic humor, comics and cartoons, software, apps, antivirus software, language courses, magazines in PDF format, advertising and an offline version of  Revolico (a sort of Cuban Craigslist), among other materials. Many buyers only request certain parts of the package.

Siré was struck by the ways in which an entirely offline Internet could provide such expansive informational access to support leisure and livelihood, additionally serving as a platform that affords local participation.

On his website, Siré describes his mission as focusing on “alternative ways of circulating information, piracy, social activities benefitting from legal loopholes, informal economy and phenomena resulting from social creativity and recycling.” This was made clear in the works that he talked about in his presentation, namely his collaboration with the American artist Julia Weist at the New Museum in 2017.

Since 2015, Siré has been in fact curating art into El Paquete through a project called  !!!Sección A R T E, a series of folders updated monthly with original projects. The folder follows the rules of the Paquete: it can be no more than five-gigabytes and must contain no pornography or political content. In early 2016, Siré invited Weist to contribute her work to the art folder, the beginning of an ambitious overseas partnership. The duo continued on to ultimately create 17. (SEPT) [By WeistSiréPC]™, a piece centered on a 64-terabyte server containing 52 weeks of El Paquete Semanal from August 2016 to August 2017. It is the only comprehensive archive of the Paquete and was made possible by Weist and Siré’s joint quest to track down all of the Paquete distributors (or matrices, literally translating to matrix or womb) in every province in Cuba. The exhibition was a tribute to the depth and intricacy of the Paquete networks, including the extent of its economic impact.

Siré’s presentation was followed by a second musical performance by Leonard and Nuñez, and the lecture culminated in a short debrief facilitated by Dorin and Professor of Music Ileana Perez Velazquez, who also originally hails from Cuba. The effects of the event lingered long after we left the auditorium; the amalgamation of works was a provocative and all-consuming experience, leaving all who attended struck by the pervasive nature of Cuba’s unconventional creative scene.