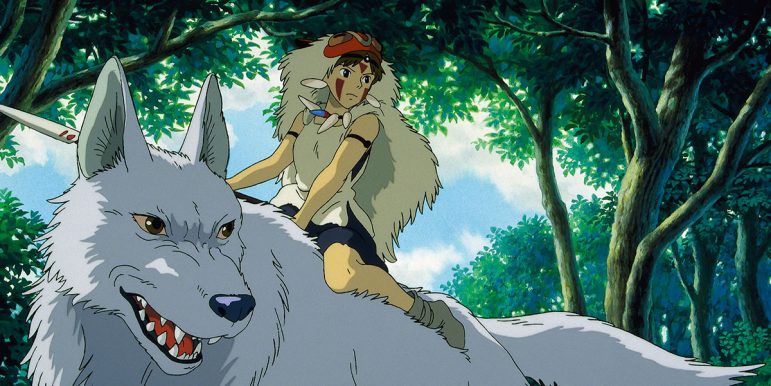 PHOTO COURTESY OF PRINCESS MONONOKE (1997). Princess Mononoke was the second film showing at Images as part of its “Studio Ghibli Celebration.”

As part of its new program “Studio Ghibli Celebration,” Images Cinema will be showing one film per month from the classic Japanese animation studio Studio Ghibli from March to November 2019. This month, Images featured Princess Mononoke, an epic story of conflict between humans, gods and nature. The highest-grossing film of 1997 in Japan, the critical and commercial blockbuster still holds relevance today.

For this week’s “Box Office Hours,” I viewed and discussed Princess Mononoke with Murad K. Mumtaz, assistant professor of art. Mumtaz’s expertise is in the historical intersections of art, literature and religious expression in South Asia and beyond. He is also an artist in his own right, trained in the traditional practices of North Indian miniature painting. Appropriately, his art often explores representations of the relationship between people and land, as well as traditional versus materialistic culture.

Princess Mononoke is set in Japan’s late Muromachi period (approximately 1336-1573). The film follows a confident young warrior named Ashitaka, who is struck with a deadly curse while fighting off an uncontrollable boar demon. To save himself from the evil consuming his body, Ashitaka must journey to the forests of the west. Upon arrival, he is thrown into an ongoing battle between a mysterious wolf-girl named Princess Mononoke, who protects the forest from the endeavors of an exploitative iron mining town, and the town’s leader, Lady Eboshi. Ashitaka attempts to broker peace between the two, with his elk Yakul by his side, while he wrestles with his growing feelings for the princess, otherwise known as San.

Princess Mononoke is often revered as Hayao Miyazaki’s most gruesome yet imaginative tale. Tellingly, my only memories from watching it many years ago entailed the sheer degree of blood and gore involved. Watching it for a second time, however, I was able to process the smaller moments that truly capture Miyazaki’s cleverness and artistry. It is true that the film does not shy away from visions of apocalypse and destruction; the ending almost leaves the forest a desolate wasteland before the healing powers of the mended Deer god restore it. It is the mature content and realness, however, that are perhaps what make it so timeless.

I discussed the film with Mumtaz in regard to Indigenous ideas of the linearity of time, or lack thereof.

“I think that’s what I love about this movie, the inevitability of the end and the idea of cyclic time – how once everything ends, there’s also a new beginning. And it also resonates with a lot of world traditions and their idea of time,” Mumtaz said. “The Yugas in Hinduism [an epoch or era in Hinduism], for example, they’re divided into four ages. The Golden Age [Satya Yuga] is the first age in which gods are literally walking on earth, and then there’re successive declines. And finally, most Hindus believe we are living in the end of the Kali Yuga right now. And then the idea is that its cyclical – so once the Kali Yuga ends, very much like this movie, there’s a new beginning.”

What’s more are the ideas of loss and sadness inherent in the film, different levels of which are present throughout Miyazaki’s various films. “In his other movies, sometimes there’s some aspect of some tragedy that triggers an escape,” Mumtaz said. “In this, it’s very different in the sense that this is the reality, and this is a parallel to what we are facing right now. This idea of apocalypse is very real. So in that sense it’s not an escape. There’s no sanitization here.”

Perhaps the most striking moment in the film comes, however, when the all-powerful Deer god finally arrives in his nightwalker incarnation, appearing as a giant amorphous creature of light and energy. It is just before dawn, and the nightwalker, colored in electric hues of blue, is slowly returning to the sacred center of the forest. There are slight gusts of wind and the rustling of the  kodamas or forest sprites, but for the most part, the scene is very still. In this stillness, the viewer feels that this is a secret moment just for them, an encounter with the divine.

“One can talk about other sort of levels of reality, according to the traditional belief in which the spirit world resides above our material level,” Mumtaz noted. “And in traditional tribal and religious times, people claimed to have contact with that world, in very much the same way we see in these movies. That’s so typical of so many older traditions, in which you have that liminal space, isthmus, through which you can have access.” Fittingly, the word “mononoke” itselfis not a name but a Japanese term for an otherworldly spirit or shape-shifting monster. Princess Mononoke, for me, seemed to exist in that liminal space – where creatures of all manifestations, from the cute to the heinous to the frightening – can all be found.

This conversation with Mumtaz is the fourth in a new Record film discussion series with faculty, staff or community members who specialize in particular aspects of films at Images. For those interested in taking part in this new series, please contact [email protected]