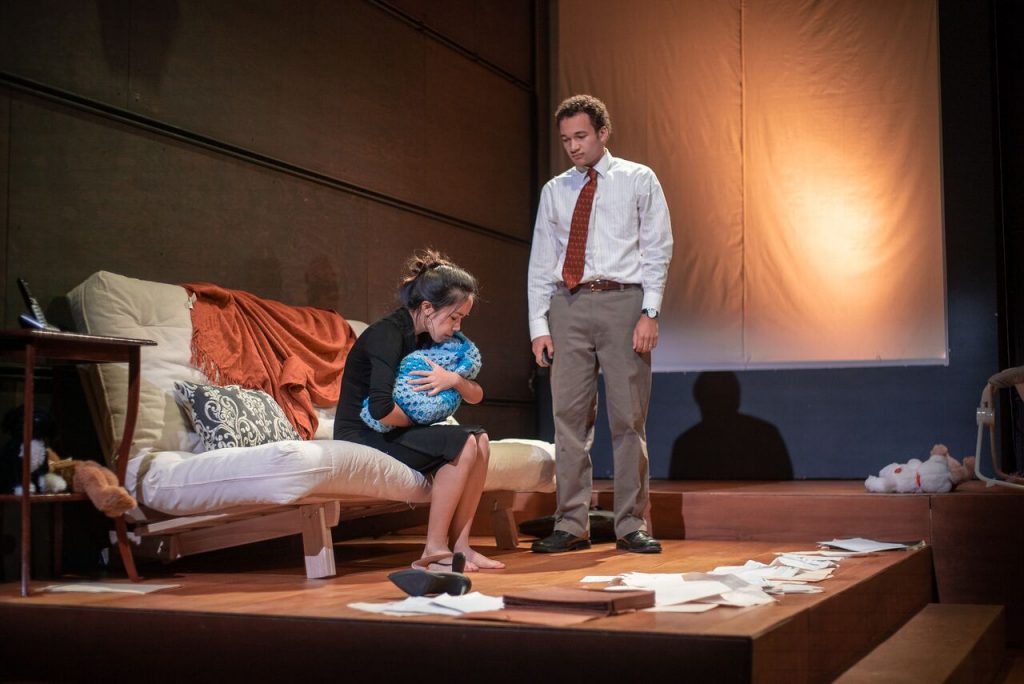 A series of five short plays under the collective title Microdramas premiered last Thursday in the ’62 Center’s Directing Studio, in a sold-out venue on both Friday and Saturday evenings. The featured plays included The Lesson by Eugene Lonesco – a comedic parable of the dangers inherent in indoctrination; 90 Days by Elizabeth Meriwether, which centers on Elliott, whose girlfriend calls to check up on him; 508 by Amy Herzog, in which two ex-lovers meet in the apartment they once shared; Springtime by Fiona Semi, about the complications of memory; and The Moon Please by Diana Son, in which a young married couple argues over who is going to work and who will stay with their newborn baby on the morning of September 11, 2001. Unique because of their brevity, these performances broke the mold of standard theater productions in notable ways.

Microdramas represent a frequently overlooked genre in the world of theater; one-act plays are often dwarfed by their full-length counterparts. In addition to being extremely brief, there are several other unique characteristics that allow these plays to stand on their own. One-act plays often better capture and highlight an isolated interaction between two characters, scenes that are more generalizable and not dependent on large overarching narratives. To fit within such a narrow time frame, however, each production faces the challenge of being able to lay out a clear beginning, middle and end while maintaining a strong storyline.

When this is translated onstage, it means that every second of the performance counts. The dialogue and demeanor of the actors must engage the audience immediately, because in an eight or ten-minute production, a dull moment can cause the viewers to miss a crucial plot point. “You have so little time and you need to pack each of the moments with a huge amount of specificity,” Nadiya Atkinson ’21, student director of 508 and 90 Days, said. “We spend a lot of time discussing what each action and line means – there are no throwaway lines.”

For the theatre department at the College, Microdramas also offers a special opportunity for students to participate in a production with a lower time commitment, helping increase accessibility and expand the department beyond its core group of engaged participants. “A large amount of students in Microdramas are relatively inexperienced, which is unusual,” Angela Yu ’20, an actress from The Moon Please, said. “I’m really grateful to the department for the opportunity to have a role, even though I have never been in a production before.”

Theatre professor Robert Baker-White said that Microdramas was meant to target a demographic of students that might have been reluctant to make the very large time commitment demanded of full length productions. “We’ve been able to get some new students in because the demands from this project are a little less, and that’s really exciting,” he said.

In most traditional models of student productions there is usually a faculty member or a visiting guest artist who directs the show. “This is a good model, and there are lots of educational opportunities when there is a professional at the lead,” White said. “However, while there isn’t anything wrong with this, we feel that this shouldn’t be the only model we use.” The integration of students in director positions while still under the mentorship of faculty finds a middle ground between the standard method and the student-run organization, Cap & Bells.

This grants students the freedom to be directing and designing within the context of departmental productions where faculty can still guide students, but to a more limited degree. Microdramas is the second production to emphasize students taking the helm in the artistic process. Last year’s Purple Valley Plays set a precedent using this new model, and the theatre department hopes to continue this trend and integrate it into the regular set of departmental offerings.

Microdramas pushes the bounds of theater both at large and at the College. The theatre department manages to both showcase a unique and underappreciated genre of theatre as well as leverage the opportunities it offers to broaden the mission of the theatre department.