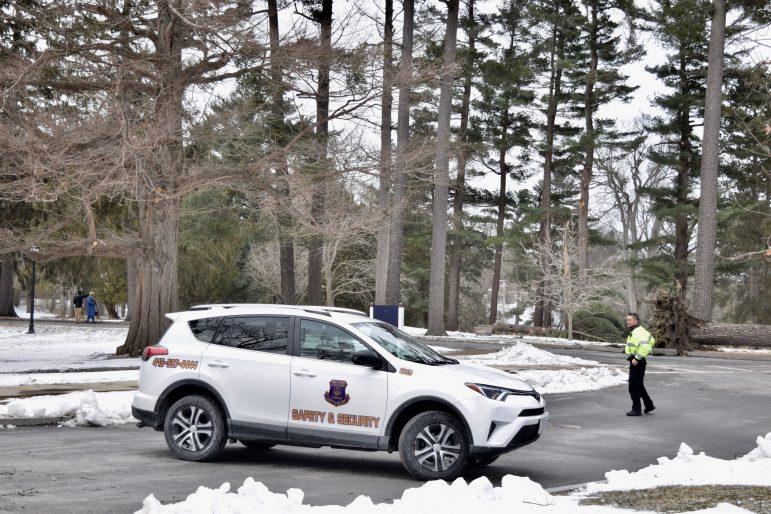 Black students and students of color have, as early as 2017, expressed discontents in experiences with Campus Safety and Security (CSS) that they believe demonstrated implicit bias. Students and administrators are collaborating in hopes to begin listening sessions among CSS, Vice President for Campus Life Steve Klass and those who have reported negative interactions with CSS.

In an open letter to the Board of Trustees published on Friday, the Coalition Against Racist Education Now (CARE Now) called for the College to “fund a thorough external independent investigation into the practices and interactions CSS has with students, namely minority students.” After meeting with trustees on Saturday, CARE Now added, “Such an investigation should be accompanied by mandatory Anti-bias training and Suicide prevention training for all officers.”

Recent events and initiatives on campus have brought to the forefront the roles of race and implicit bias in student-administrative relations with CSS’ treatment of Black students and students of color. In November 2018, the Black Student Union (BSU) hosted a town hall in which one of the main concerns voiced by the students in attendance was racially biased interactions with CSS officers. Many students of color used the space to share personal testimonies of what they characterized as racial targeting by CSS officers in the presence of peers and members of the administration. Additionally, last Wednesday, All Campus Entertainment (ACE) changed the weekly Stressbusters event theme at the last minute from “CSS Appreciation Night” to “Eat like a Spring Fling artist.” The organizers explained in a Facebook post that “ACE recognizes tensions between CSS and students of color at Williams and has decided that the dialogue needed for progress requires a time and space different from what we can offer.”

The history of the issue goes back further to 2017, however, when Bilal Ansari, the College’s current director of campus engagement and acting director of the Davis Center, returned to the College after three years away, and almost immediately began hearing personal stories of harm from students. “I came back in 2017 and when I heard [what was happening], I [couldn’t] sit quietly by,” Ansari explained. His first reaction was to go right to the source.

“That’s when it became clear,” Director of CSS Dave Boyer said. “We had situations that … were complicated and charged before Bilal came back, and when he came back he [brought up the] same situations we were also struggling with, but [now] we were hearing it for the first time from the perspective of students.”

In fall 2017, Ansari invited Boyer to speak to members of the BSU in in an effort to “start a positive relationship, to start the dialogue around what can we do to change the disproportionate calls on Black and Brown folk, and how can we change the negative perception that Black and Brown folk have toward CSS.”

“Students can call anonymously and tip and CSS has to respond,” Ansari explained. “It leaves no responsibility to the caller so people can, and have continued to, [utilize CSS] instead of having the human contact… CSS is disproportionately doing the work that College students should be doing among themselves.” Ansari continued. “[The anonymous tip line] is weaponized by students who want to target other students, or students who don’t want to confront other students… It is a convenience that takes students off the hook from having a conversation. It’s easier to just dial a number and call, despite the emotional harm that that does to other people  who come from communities in which their relations with people with badges causes anxiety, stress [and] straight up fear.”

Amari Yirgu ’22, who spoke about just one of her multiple experiences with CSS at BSU’s November town hall, shared similar sentiments. “I think a lot of white students on campus don’t think too much about calling CSS because they genuinely do believe that it’s campus security and safety,” Yirgu said. “I think there’s a dissonance and misunderstanding between white students and students of color on campus about how CSS actually makes us feel. It does not make me feel safe.”

Several initiatives have thus been put into motion to combat multiple aspects of the concerns. One is addressing students who feel they have been harmed or unfairly treated by CSS. In conjunction with CSS and Austin Huang ’21, Ansari is working to create listening sessions among CSS, Vice President for Campus Life Steve Klass and those who have reported negative encounters with CSS.

These sessions are modeled off of programs used by the National Initiative for Building Community Trust and Justice, a Department of Justice project “designed to improve relationships and increase trust between minority communities and the criminal justice system.” Huang, who worked at the organization during the summers of 2017 and 2018, is planning on scaling the listening session model to make it applicable to Williams. Huang explained that the model he observed was centered around the coming together of community members and police officers with the goal of vallidating community experiences and beginning a process of healing, in addition to helping police understand the needs of their communities and how to move forward.

Along with Ansari, “a number of us – Dave Boyer, Steve Klass, Marlene Sandstrom, [Dean of Faculty] Denise Buell – [are] looking at existing policies and practices with an eye toward considering what ought to be changed,” Vice President for Institutional Diversity and Equity Leticia Haynes explained.

Residential life is one area that can be expected to change. Klass specified that “one of the most beneficial outcomes would be to take the burden off of CSS, who have to respond to issues that could be addressed more directly by housing staff. The current over-use of the anonymous tip line by students to resolve basic issues like smoking in the house, loud music, etc. can be reduced dramatically by providing a different kind of staffing model.” There is also discussion about creating a more transparent tip line and CSS calling process.

Yirgu and Cleveland Lavalais ’21, both students who spoke up about their experiences at the town hall, have agreed to be some of the first students to take part in the listening sessions in an effort to ensure that their experiences are not replicated by future students of color. “I feel like if I don’t share my story and  try to make a change here, there’s going to be another frosh or whoever comes here years later and has to deal with this, and I’m over the pain of my people,” Yirgu said.

“No one’s going to check them except for us,” Lavalais said.

However, not all students feel as comfortable to take part in these listening sessions. Ansari made clear that “there is [still] a lot of trust that needs to be built first, and I don’t know if students even want to sit and talk anymore. I hear a lot of students say ‘I’m tired of listening. I’m tired of sitting and talking. I’m ready for action.’ That’s where a lot of my students are right now. I don’t blame them. I get it.”

Given the recent conversations surrounding institutional forgetting on campus, there is a certain sense of cynicism and mistrust towards the administration and following administrative channels in an effort to enact change, students said. Moreover, as Lavalais pointed out, asking students who have had negative encounters with CSS to sit in a room and talk to them is potentially distressing. “[Students] first of all just exhausted by being here generally, and having had run-ins with CSS and having to continually talk about it can also be exhausting and traumatizing,” Lavalais said.