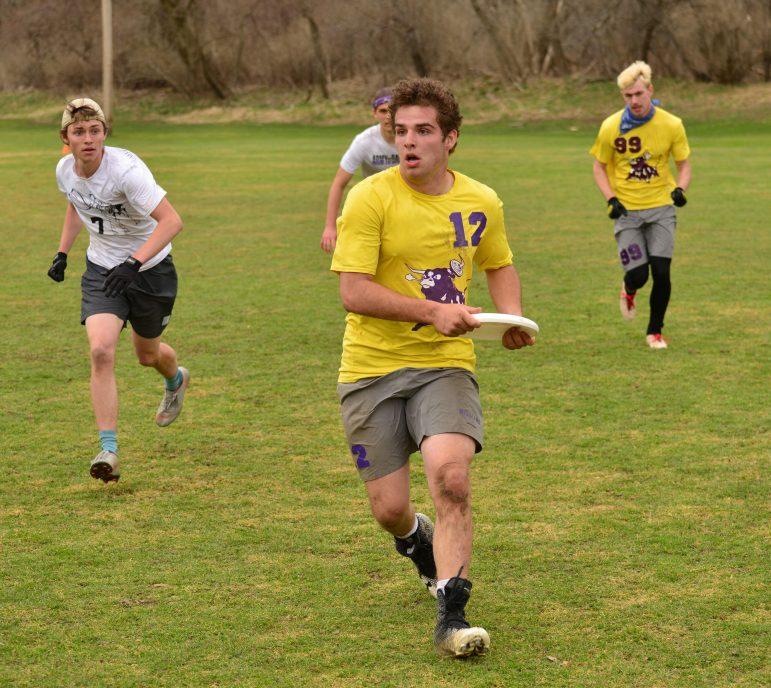 Several club sports teams competed last weekend, with women’s (La WUFA) and men’s ultimate frisbee (WUFO) earning bids to regional tournaments at the end of the month. Women’s water polo finished its season with its only home tournament, and men’s rugby secured a win in its second match of the season.

The women began their postseason last weekend, competing at sectionals in Northampton against Amherst, Smith and Mount Holyoke. The team entered as the first seed and maintained its standing, defeating Mount Holyoke 11-6 in the tournament’s finals.

La WUFA will host the top eight teams in New England at Div. III regionals on April 27–28. The top four teams will then advance to the national championships, which will be held in College Station, Texas, on May 18–19. La WUFA has competed in every national championship since 2013.

“We are incredibly excited to host regionals,” team president and tri-captain Caroline Weinberg ’19 said before the tournament. “Four of the top six nationally ranked teams will be here, so it is definitely going to be competitive, but it is also incredibly likely that the four of us move on to the national tournament.”

WUFO hosted its own sectionals this weekend and secured a spot in regionals after finishing second. During pool play, the men took down Clark, Providence, Amherst and WPI, losing only to defending national champion Bryant in a hard-fought 15-10 game. Big catches from Tucker Lemos ’19, Kaizen Conroy ’21 and Nathaniel Munson Paolmba ’21 built momentum on Saturday, and the consistent play of Kees Knight ’20 led the team to key victories on Sunday. The record earned the men a spot in the weekend’s championship game, during which Bryant once again defeated them.

The men travelled to two away tournaments this season, coming in first at one in New Jersey. “We’ve been working hard for months, and we’re starting to see it pay off,” team president and tri-captain Ari Ball-Burack ’19 said.

Regionals will be held at Bryant in Smithfield, R.I., in two weeks. If WUFO finishes in the top four at the event, it will advance to nationals.

“WUFO hasn’t gone to nationals since 2009 and, with a deep and talented senior class, there’s a lot of optimism that this could be the year,” Ball-Burack said. “Win or lose, regionals is going to be a high-level, entertaining two days of ultimate, and I can’t wait for that.”

Women’s water polo hosted its own championship tournament this weekend, competing against six other teams from the New England region. The women won two of their three games, upsetting their competition to earn fifth after entering as the seventh seed.

Although the team of 10 graduated six seniors last spring, captain Majda Murati ’21 said that it has had one of its most successful seasons yet. “We’ve been better this season than we have been in the past,” said Murati. “We’re on the up-and-up.”

While most of the teams in the league have outside coaching, the Eph team is completely student led. Murati added that the team’s upperclassmen help to train newer members, some of whom had never played water polo before. “It’s this really cool symbiotic relationship that works really well,” she said.

The College’s cycling team is in the midst of its racing season. The team recently sent three cyclists to Shippensburg, Penn., to compete in a circuit and road races, as well as a hill climb. Co-captain Matthew Wiseman ’20 took fifth in the Men’s A division hill climb on Sunday. “We had a great weekend racing our bikes in weather that felt like summer!” Wiseman said.

The team will compete once more this season, in a weekend race at the end of the month. Wiseman, who is currently ranked 16th in the Eastern Collegiate Cycling Conference, will also qualify for nationals if he ends the season in the top 20. Many new members have joined the cycling team this year, which Wiseman said has made the season “a major success.”

Men’s rugby also competed this weekend, taking down Holy Cross 20-0 on Saturday. The team began its season on April 6 with a win over Wesleyan. Next Saturday, the team will host its annual John Donovan Memorial Tournament, named in memory of former Eph player John (JD) Donovan ’83. All of the tournament’s proceeds will be donated to the Brien Center for mental health and substance abuse services in Berkshire County.

On April 27, rugby will end its season with a matchup against Amherst. The team already took down the Mammoths once this year during its fall season. “If we win, my senior class would become the first in club history to have beaten Amherst eight times in a row,” Rugby President Seth Goldstein ’19 said. “I think that would be a great legacy to leave behind.”