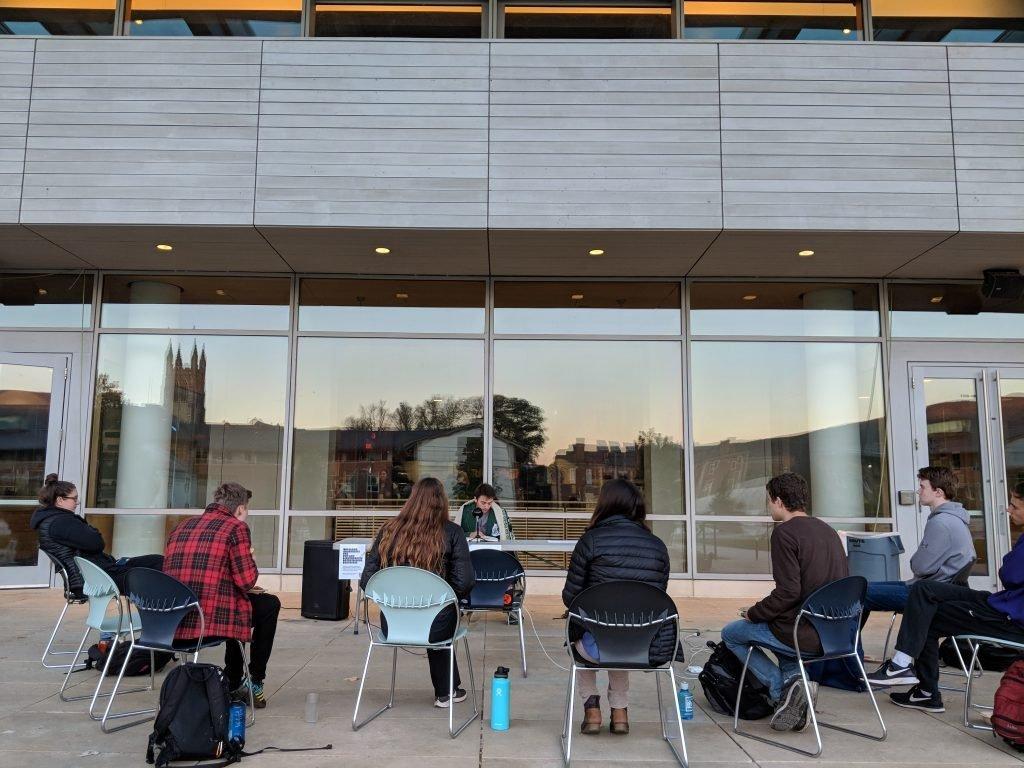 If you’ve taken an evening stroll past Paresky recently, you may recall experiencing a moment of déjà vu upon hearing a few lines of Harry Potter blasted through a speaker on the front steps. These events, and many more like them, were the brainchild of Williams Anarchists for Fun and Lighthearted Entertaining Surprises (WAFFLES), a new student organization on campus. WAFFLES, a self-described “wholesome underground prank collective,” aims to provide some relief from the day-to-day boredom of the College student experience in ways that eschew the pitfalls of events that may feel forced or overly planned.

Rather than attempting to escape from monotony, WAFFLES strives “to disrupt the monotony itself” through spontaneous, original events. Morgan Whaley ’20 summed up the club’s goal concisely. “In short, we’re working to make Williams a place where people don’t need to go out of their way to have fun,” she said.

Part of the group’s mission is simply to surprise people. According to Marshall Borrus ’20, WAFFLES aims to “create a Williams where you wake up and you’re like, ‘I don’t know what kind of crazy stuff will happen today,’” he said. “We want to make people rethink how they can live at Williams.”

So far, the group has hosted several events. Aside from the ongoing quest to read the entire Harry Potter series aloud, the group at one point congregated outside Sawyer Library, gesticulating at the sky and shouting as though a UFO were passing over. Describing the club’s mindset in selecting activities, Jason Adulley ’19 said, “We go for stuff that’s really spontaneous and surprising and generally try to stay away from overly planned events.”

The group’s unusual name is a perfect example of the mindset it espouses. Ashley Villarreal ’20 reflected on the choice to describe the group as “anarchists” in the second letter of its acronym. “Well, anarchy gets some people’s attention, but the ‘FLES’ in WAFFLES – ‘Fun and Lighthearted, Entertaining Surprises’ – is more in line with what we do,” she said. WAFFLES distinguishes between the usually negative connotations of anarchy and what its members see as a more benevolent and fun “anarchy.”

Ari Ball-Burack ’19 described the “primal yell” event that inspired WAFFLES. “One of us organized a primal yell during finals last spring, and watching 60 people scream their hearts out on the marble blocks, laugh and go back to studying was a highlight of my Williams experience,” he said. “We want to recreate and expand that feeling in a sustainable way, and WAFFLES seems like an answer.”

Another way the club differs from more traditional groups is in its adherence to secrecy when it comes to coordinating events. The events the group plans, both in terms of frequency and type, vary. Surabhi Iyer ’21 explained the need for secrecy with that variety, saying that “the underground aspect is important because the last thing we want is for this club to become routine.”

WAFFLES is open to the idea of expansion and is actively recruiting new members. “We’d love to have anyone who wants to get involved to come through, whether it’s by coming to events or joining the team in a more permanent role,” Hallie Della-Volpe ’21 said. “The group is an assembly of really social, funny, positive people and we want to create events that surprise the community.”

Students interesting in becoming a part of WAFFLES can direct their attention to the WAFFLES of Williams Facebook page or to its new website, launched this week at bit.ly/williamswaffles. Events are ongoing, and the group hopes to establish itself as a part of the College’s social culture for good. Carlos Cabrera-Lomelí ’20 noted that the specifics, however, are still under lock and key for now. “As for future plans, that’s a secret – spontaneous surprise is key to our work, so I can’t reveal anything now,” he said. “But I promise that we have a lot planned for this semester and beyond.”