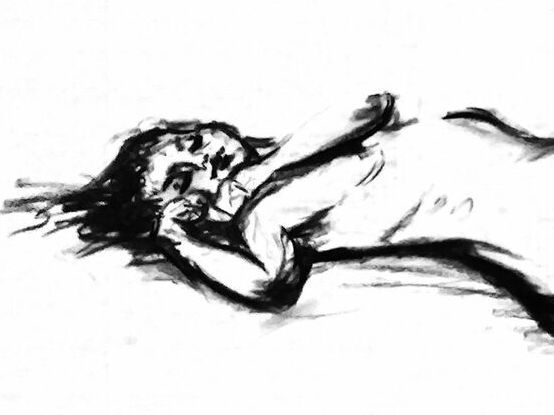 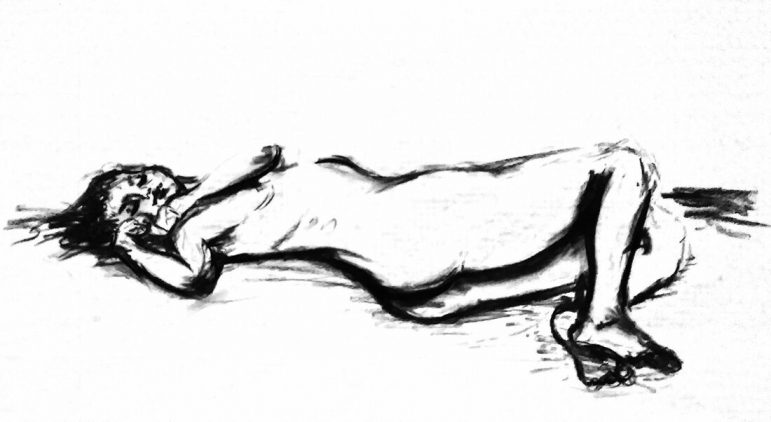 Victoria Michalska ’22, whose art is pictured, is one of many who draw inspiration from nude models. PHOTO COURTESY OF VICTORIA MICHALSKA.

In his first nude modeling session, Felix Knollman ’19 ended up with a partner model: his good friend’s girlfriend, whom he had not formally met yet. “It wasn’t particularly awkward, actually,” Knollman said.

In his sophomore year, his friends’ jokes about his partial dressing habits inspired him to become a nude model. Knollman and the College’s other nude models pose for biweekly figure drawing sessions – open to all students for free and to non-students for $5 – and for studio art classes.

For Knollman, the weirdness of being nude in front of a class subsides after only three seconds. When Aidan Dunkelberg ’22 takes his clothes off, he experiences “20 seconds that are the most nerve-wracking part of anything ever,” but once naked, he does not feel self-conscious.

He first heard about the nude modeling position at a WOOLF-related lunch. Everyone had laughed, but he recalled thinking, “Hey! That might not be that bad.” New to semi-public nudity, Dunkelberg said he feels “a rush of confidence because I’m experiencing something that’s totally abnormal for me.”

Not everyone feels so liberated. Veronica Berger ’22, who added her name to the nude modeling list because of the lucrative $14 hourly wage, described her first session as “terrifying” and “stressful.” In that session, she posed with her head up or to the side to avoid eye contact. Although by the end she was more comfortable, she left shaking and thought, “I hope I don’t run into anyone from that class.”

The next day in her economics class, Berger sat across from a girl who kept smiling at her. Berger smiled back, thinking, “She’s smiling because she’s like, ‘Ugh, this class, I’m not really about it’ … like, an econ smile.” The next time Berger modeled, she recognized her classmate and understood the reason for the smile. “I want to die; I want to disappear,” she thought at the time.

The vulnerability of nudity is not the only challenge of this position. Working from general guidelines, models invent their own poses, which they must hold anywhere from 30 seconds to an hour. According to Berger, this freedom can be “nerve-wracking because … I’m trying to think of what I can do next that won’t disappoint them, that won’t be too boring.”

For Knollman, the years of creating his own poses have increased his artistic awareness of his body. He thinks about what positions “will form lines or contours that are interesting” or “make some of my muscles flex so that there are actually outlines that you can draw.”

Berger, Dunkelberg and Knollman all brought up the balance between striking interesting and comfortable poses. “If you pay attention, we’re never actually still in our day-to-day lives,” Knollman said. “If you force yourself to be still in one position … it’s hard, and it hurts.”

Knollman and Berger both said their worst pose choice was a deceptively uncomfortable seated position with arms back and elbows locked. As one’s arms tire, the position requires increasing core strength. Berger said, “Five minutes in I was like, ‘This kind of hurts, but you know, 15 more minutes, OK.’ Uh-uh. It just got so much more unbearable. I felt like my arms were shaking. Everyone could see me struggling. But I didn’t fall out. I just, you know, inside my head, I was like, ‘You better stay there. You can’t move.’”

Dunkelberg, however, has few regrets. “Any pose … will start to hurt after long enough,” he said. “I’ve done things that have hurt more than others, but it’s not like, ‘Oh, this is a grave error,’ because it wouldn’t be good regardless.”

If Knollman knows one of the artists, he comes up to them during breaks, and they discuss the drawings. People have come up to Dunkelberg after the session to praise his modeling skills, and he and the students acknowledge each other outside of sessions. Though Berger rarely interacts with the artists, she said she felt that they “understood that I was a person also… It was all in the purpose of art.”

Victoria Michalska ’22, a student in ARTS 230: “Drawing II,” said she imagines that nude modeling is “very nerve-wracking because in our society we’re taught that that’s such a vulnerable state.” But for her, “a model is a model.”

“When I’m drawing them, I’m focusing on the curves and the lines,” she said. “That’s the relationship between me and the subject.”

Although she observes them as curves and lines, Michalska said she respects her models in her artistic process. “I feel the need to represent them accurately because that’s who I am as a person,” she said. “I’m trying to present them with accurate proportion, not idealize anything too much but still impose my feelings onto it.”

Michalska admires that the models she has worked with have become more comfortable during their sessions. “Coming over that vulnerability – that’s a step in your relationship to your physical self,” she said.