One in Two Thousand: Faris Gulamali ’21 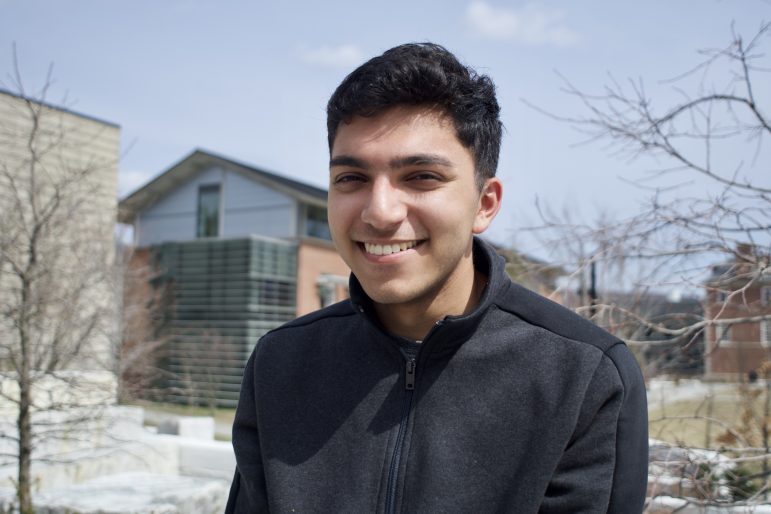 Kaira got to know Faris when they were co-Arts editors for the Record during the spring semester of 2018. Irene first met Faris last month, when he was having dinner with Editor-in-Chief Danny Jin ’20, who introduced the two to each other. We sat down with the man himself to talk about Facebook ruses, vape clouds and camel humps.

KM: How was your break?

FG: It was good. I went back to Seattle, and a bunch of Williams kids visited, and they wanted to go to the “hot spot” in Seattle. And the only hot spot in Seattle is this place called Pike Place… It’s basically a fish market. So I went to the fish market seven times over the course of 14 days.

KM: I thought you went skiing, too. You posted a lot on Facebook about it.

FG: Uh, yeah. That was totally me.

KM: Wait. What do you mean? What’s up with your Facebook? Does someone else run it?

FG: It’s quite possible that a wide variety of people have access to my Facebook at this time.

FG: Oh, man. I’m going to get totally exposed. I think I accidentally logged into a computer at my uncle’s house, and so now my entire extended family has my Facebook.

KM: Whoever’s running your Facebook posts so many photos of you wearing sunglasses. And they posted one of you skiing over spring break. They commented below it, “Spring break!!!!” with, like, four exclamation points.

FG: Oh, yeah. I did see that, eventually. But I did not do that. Can I tell you something? I didn’t even go skiing.

FG: Chemistry, definitely… It’s a super interesting topic, because you’re exploring things as they are, on a molecular level. It also applies to bio and physics, which are also topics that I’m interested in. I don’t enjoy pipetting, though. I don’t like chem research at all. I do like learning about it, though.

IL: What do you have against pipetting?

FG: It’s very exhausting. It’s a lot of work. You use your thumb and you have to move your arm and your hand a lot of times.

KM: I heard through the grapevine that you lift weights so that your hand doesn’t shake when you pipette. Is that true?

KM: Is this gym routine working for you?

FG: Yes. Definitely. My physical strength might not be going up, but in terms of, “Is my hand shaking when I pipette?” it’s not, which is ultimately the goal.

KM: Were you doing that over the summer, when you were here?

FG: Oh, no. Over the summer I was doing chem research, and that’s when I realized I didn’t like chem research.

KM: I heard that you did like going to plays over the summer, though.

FG: Oh, I went to so many plays! I saw Ferris Bueller!

IL: I was actually going to ask, do you get a lot of jokes about your name? Do people make Ferris Bueller jokes a lot?

FG: Surprisingly, not really. Honestly, I think I’ve heard as many Ferris Bueller jokes as I’ve heard ferrous chloride – like iron – jokes, so I’ve heard like an equal amount of those.

KM: Well, tell me about the plays that you saw.

FG: So there was this musical that was here over the summer. It had a lot of singing, and it was very exciting. But at one point, I think they brought in Eden Espinosa, who is kind of famous. And as part of the play, she walked out, and she just started vaping on the stage. And I was sitting in the front row. So I got to smell Eden Espinosa’s vape smoke. Which smelled like normal vaping smoke, but it was, like, Eden Espinosa’s vaping smoke.

KM: That was a part of the play?

FG: It was part of the play! Like, Eden Espinosa just looks in my direction and takes out her, like, Juul or something – I don’t know what it’s called – and she uses it and blows it into my face and I’m like, “Yes. Mission accomplished. That’s all I wanted in life.”

KM: So, I don’t know if this one’s true: I’ve heard you go to every lecture, ever, at Williams.

FG: That is 100 percent true. I went to almost every faculty lecture [last semester], save one, I think because I had to go to another lecture?

KM: And then you take furious notes.

FG: Yeah, so I have this journal. My sister thought it was a diary, and she tried to look through it. During fall, there was a series of chemistry lectures, and I took notes in my journal. And then I went home, and my sister looked through my journal and she’s like “Where are all your secrets?” and I’m like, “They’re in the chemistry notes.” And she learned, like, organic chem in a month. Because she was studying my notes so intently to find my secrets. I don’t know if I should’ve done that, but she’s smarter for it.

KM: Wait, Faris, how many siblings do you have?

FG: I only have one, a younger sister. She’s basically me, but better. In every way. Like I’m not really a musician, but she’s a legit musician. She’s a cellist. She plays chess better than I did. Like, I went through the same classes in high school and barely passed some of them, and she’s chilling with 99s and I’m like, “What.” Which is good! That means that she’s doing well.