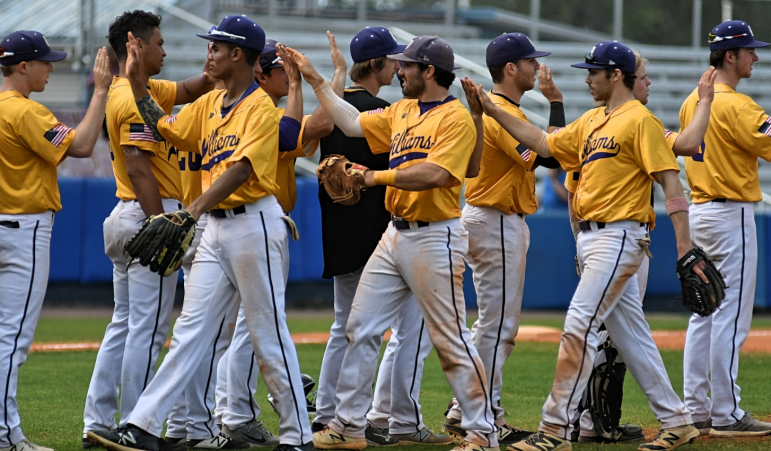 After struggling during the 2018 season, baseball (13–4, 1–3 in the NESCAC) has shown remarkable improvement this year. Battling many injuries, the team ended last season with a record of 9–21. The men have already surpassed this win total less than halfway through the 2019 season.

The season kicked off with a successful spring break trip to Florida. Despite playing a grueling 13 games over a 12-day span, the men managed to maintain their momentum throughout the trip. The Ephs began with a five-game win streak in Fort Myers. The fourth of these wins came against No. 16 Johns Hopkins on March 22, when the Ephs beat the Blue Jays 9-8.

“I think one game that was big for us was the Johns Hopkins game,” catcher Dave Driscoll ’22 said. “It was our first test of the year, and it was the first time we really had to come together as a team and overcome adversity. [Johns Hopkins] came back twice throughout the game, and we had to kind of fight back and regain leads. I think we did a good job of that. We came together. It was a good team win in general.”

The streak ended with a loss to No. 18 Denison. After the loss, the team rebounded and went undefeated for the remaining seven games of the trip. First-year players attributed much of the team’s success to the leadership of upperclassmen.

“I think the captains are the biggest part of the team, or [all] the seniors, the upperclassmen. I think being on the team last year, they kind of realized what went right and what went wrong,” Driscoll said. “They decided to really take [on] leadership position[s], all of them, and starting in the fall with practices and lifts, they[’ve] held everyone accountable.”

Pitcher and infielder Danny Lynch ’22  also believes the captains played a critical role in establishing the team’s culture. “Everyone’s truly all in,” he said. “We’re all playing for one team rather than playing for ourselves. We’re playing for one common goal, which really started with the captains and the attitude they brought to the table when we all got here.”

The team’s leaders have deliberately sought to cultivate a winning culture. Tri-captain Alex Panstares ’19 said that the process began long before the start of the season.

“Building a strong culture begins in the offseason,” Panstares said. “As captains, we had a vision of what we wanted this team’s culture to look like, and we worked hard to develop that throughout the fall and winter. It’s certainly easier when your teammates are all of your best friends, but they did a great job of buying in to what we were preaching. Once the season began, the transition to practicing and playing with coaches was seamless, which says a lot about our coaching staff.”

The team says it is happy with what it has accomplished so far, but it is focused on sustaining its success throughout the remainder of the season.

“We are healthy compared to last year, and our first years have made a significant contribution,” head coach Bill Barrale said. “Leadership in the offseason has been very good. We plan on taking it one game and one pitch at a time, and focusing on the things we can control.”

Panstares echoed some of his coach’s sentiments. “Our overarching goal is to win the NESCAC, but honestly, our goal is always to execute the task at hand,” he said. “As a team, we’ve done a great job of taking everything one day at a time, and we will continue to take that approach.”

The team will seek to continue its successful season with a midweek contest at 4 p.m. today at Vassar in Poughkeepsie, N.Y., and a three-game home series against Middebury over the weekend.