Men’s lacrosse knocks Amherst from the ranks of the undefeated 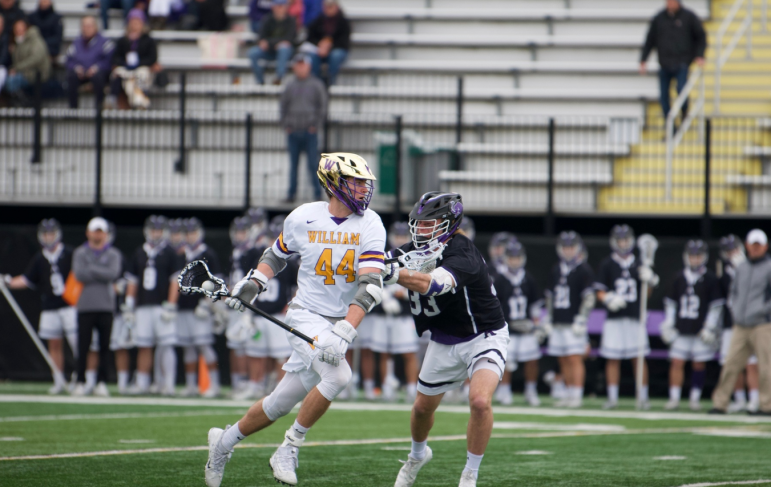 No. 9 men’s lacrosse (8–2, 4–2 NESCAC) defeated No. 5 Amherst 13-11 in Saturday’s rivalry match-up at Farley-Lamb Field. With the victory, the men gave the previously undefeated Mammoths their first loss of the season.

“[Saturday] was a great team victory for us,” Eph head coach George McCormack said after the game. “Our 6-on-6 defense and offense played well the whole game and it showed in the end result.”

Amherst took the lead early on, scoring 20 seconds into the game. The Ephs soon tied the game, with a feed from Jake Haase ’22 and a crease-crank from Cory Lund ’21 with 11:21 left in the period. Three minutes later, the Ephs took a 2-1 lead off of an unassisted goal by Calvin Collins ’20 and, 20 seconds later, brought the score to 3-1, when Brendan Hoffman ’20 ripped a shot and scored unassisted.

With 7:21 left in the quarter, Amherst fought their way back into the game, with a bounce-shot and goal. The Ephs then scored two straight goals by Matthew Seligson ’20 and Kevin Stump ’20, bringing the game to 5-2. With only 3:20 left, Stump shot from 15 yards out and netted a goal unassisted to increase the lead to 6-2.

The Mammoths netted the first goal of the second quarter, which was soon followed by an Eph goal scored by Collins unassisted. With 5:52 left until halftime, Amherst scored off of a dunk to bring the game to 7-4. Two minutes later, the Mammoths scored again. With 15 seconds left in the quarter, Seligson slam-dunked the ball and drew a penalty, securing a man-up opportunity that the Ephs failed to capitalize on. Nevertheless, the Ephs maintained an 8-5 lead at the end of the half.

Jared Strauss ’21 netted the first goal of the second half, ripping a shot into the top right corner of the net. The Mammoths responded 20 seconds later with a goal, which was followed by an unassisted goal by Hoffman.

This back-and-forth scoring brought the Ephs to a 10-6 lead. At 10:11 left in the third quarter, defenseman Chris Burdick ’22 ripped a shot on the run to grow the Ephs’ lead, which was soon counteracted.

With 7:33 remaining, the Mammoths scored again, reducing the Ephs’ lead to 11-7. One minute later, Lund shot a worm-burner of a goal to give the Ephs back their four-goal cushion. The men were up 12-8 going into the final quarter of play.

Amherst scored twice to start the fourth quarter, bringing the game to 12-10. With 7:47 remaining, the Mammoths netted another goal, putting them only one behind the Ephs. This was countered 10 seconds later by an Eph goal scored by Alex Kitt ’21 who won the faceoff and went in directly on goal to score, giving the men a 13-11 lead.

Eph goalie Harry Gahagan ’21 recorded 10 saves, while Mammoth goalie Chad Simons registered 14 saves. The Ephs were led by Collins, Lund and Hoffman, who each had two goals and one assist.

The men followed their upset of Amherst with a 12-6 victory over Hamilton on Tuesday. The team travels to Colby next on April 13.