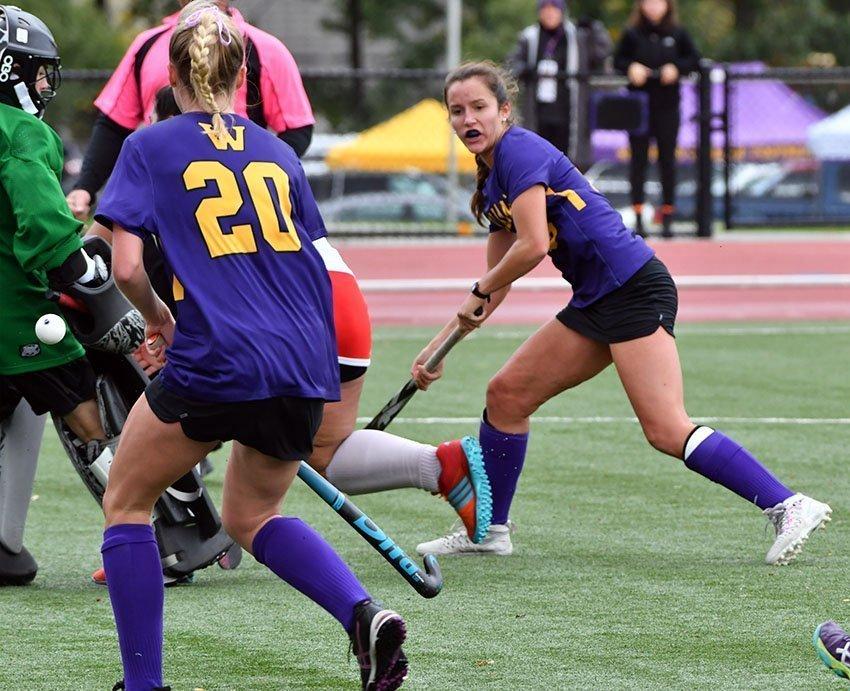 Isabel Perry ’20 had two assists in the match against Wesleyan on Saturday en route to a 2-1 win. Photo courtesy of Sports Information.

Field hockey (8-3, 6-2 in the NESCAC) defeated Bowdoin and Wesleyan at home over the weekend.

On Sunday, the women pushed through double overtime and a penalty shootout to edge Bowdoin. Kate Gregory ’22 slotted a goal in the last penalty shot for the Ephs to win 2-1.

The Polar Bears gained momentum at the start, with Elizabeth Growney knocking a hard shot at the goal which tri-captain keeper Emma Santucci ’19 blocked off her thigh.

The Ephs then took the ball down the field for their first shot of the game off the stick of Claire Fitzpatrick ’21 at 13:17 that was saved by goalie Maddie Ferrucci. After a scramble the Ephs took the ball for five penalty corners in a row. Receiving the ball from Emma Ticknor ’20, Fitzpatrick crossed the ball to Libby Dolan ’19 where she fired it in for the first goal of the game at 16:53.

As the Eph offense pushed for more, Bowdoin’s Manveer Sandhu broke off with the ball past the Eph defense to score and tie the game. Bowdoin pushed to get the lead, notching two late penalty corners and two more shots, but was fended off by the stout Eph defense and Santucci.

At the half Abby Lloyd ’20 would take over for Santucci and would remain in for the rest of play.

The second half proved to be a stalemate in both score and opportunity as both teams pushed on penalty corners but were unable to convert.

The game moved into overtime, where Williams quickly pushed three penalty corners, with tri-captain Meredith Wright ’19 striking one toward the goal but Ferrucci kicked it out at 72:05. The Polar Bears threatened with less than a minute left with a shot by Abby Bashaw at 79:07 but Lloyd made a save to keep the game tied.

After a scoreless second overtime period which featured chances on both sides, the game moved into a penalty shootout. Four players on each team shot, and the score was tied 1-1. With the final shot, Gregory came off the bench to take the shot for the Ephs and muscled her way past Ferrucci to knock the ball in. The Polar Bears could not answer back as Elizabeth Growney’s only shot was kicked away by Lloyd.

It was a day ruled by substitutes – Lloyd had six saves on the day, all outside of regulation time while Gregory scored the game-winning penalty goal.

Head coach Alix Barrale ’93 could not put into words how excellent the bench play was. “Lloyd being a wall in the goal and stopping that penalty stroke was huge,” she said. “And Gregory coming in off the bench to score the winning goal was unbelievable. As a coach I can’t be more proud of the team effort put into this game.”

On Saturday, the women beat Wesleyan 5-1 to bounce back from back-to-back double overtime losses in their previous two games.

The Ephs and Cardinals started off threatening with shots on both sides while the Ephs notched three penalty corners in the first 10 minutes. Fitzpatrick moved quickly with a hard shot at 9:06 but was turned away by goalkeeper Delaney Wood.

Nikki Gerjarusak broke through the Eph defense at 12:11 to go one on one with Santucci, but Santucci made a save to keep the Cardinals empty-handed. Gerjarusak came back at the 20 minute mark to line a shot to the left corner of the goal, putting Wesleyan up 1-0. The Ephs answered back quickly with Dolan taking a cross pass from Perry to hit the back of the net at 23:33.

The Ephs kept the pressure on by notching another penalty corner at 28:08 and after a large scramble in the circle, Allie Weiner ’21 was awarded a penalty stroke, sinking the ball past the stick of Wood to put the Ephs up 2-1. But the Eph offense was far from done. On another penalty corner at 32:24, Perry lined the ball to Weiner for a straight shot to the net, making it a 3-1 game at the half.

Lloyd would go in for Santucci at the half for the Ephs. Santucci had two saves and allowed one.

The Ephs broke through again as Dolan sent a cross to Fitzpatrick, allowing her to sneak the ball past the pad of Wood for a 4th goal at 45:03. The fifth penalty corner of the half came off Gregory’s stick who sent the ball to Wright. Wright found Gregory at the corner of the goalbox and Gregory sunk the ball into the opposite corner for her first collegiate goal.

Barrale commented on the emphatic victory. “We dominated early with six penalty corners, but Wesleyan scored early, which normally puts teams up on their toes,” she said. “We did a great job of coming together after that goal, making great passes and converting on our penalty corners. And we were able to carry that fire into the second half and not let up offensively.”

The women played Mount Holyoke on Tuesday, but the results came in too late to report. The Ephs’ next match up will be home game against Keene State at 6:00 p.m.