One in Two Thousand: Sarah Sutton ’21 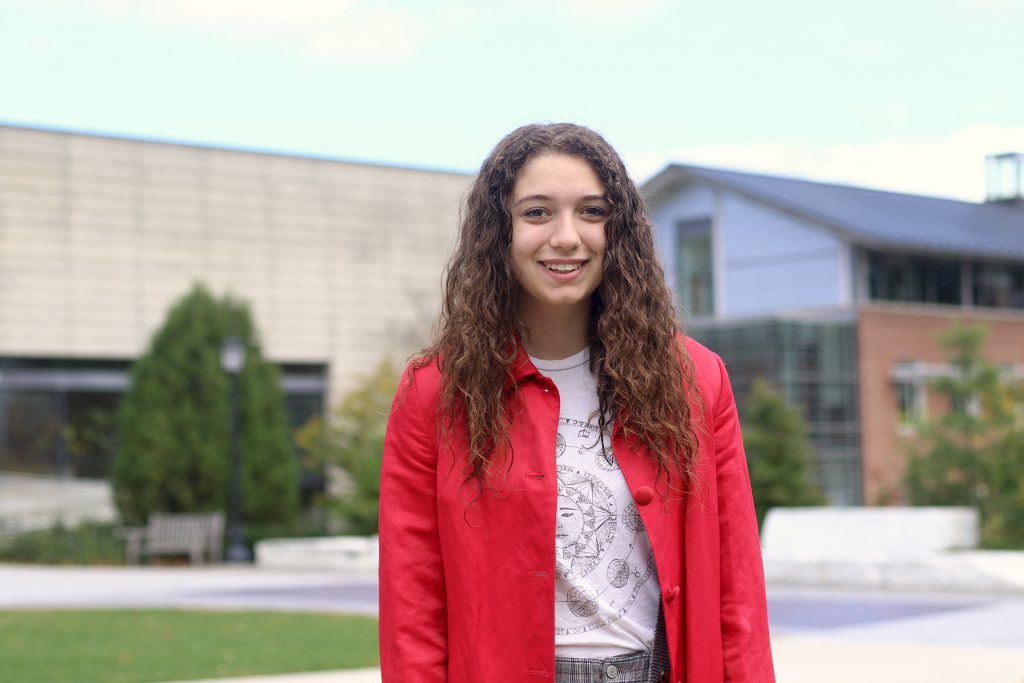 I first met Sarah at a crowded party at 71 Hoxsey, where we bonded after escaping through an open window. I caught up with her to discuss her success as a photographer, her Eloise at the Plaza childhood and her family of “witches” in this spooky edition of one in 2000.

You worked at the Williamstown Theatre Festival this summer – how was that experience?

The theatre festival was so interesting because there were only two Williams students working at the festival, while there were around 350 different people on campus working on it, and all of them were living in Greylock Quad. Most of them were ages, like, 22 to 40, and they were all trying to relive their college experience here but also create art. It was really cool because during the year the theater is very empty with few people who are always involved in the department, but over the summer it was so full. I was a photo intern, so I went to all of the events and met the artistic directors. Taking pictures of the entire process just made me realize how much work and how many artistic minds are coming together.

Tell me about the picture you took that made it to The New York Times.

Yeah! My job was to photograph events and people and stuff, but I was not allowed to photograph the actual productions. They had two production photographers, and one day, one of them couldn’t make it, and so they just said, “Okay Sarah, we’re just going to have you there as a second person taking photos,” which I was super nervous and excited about. I took pictures of Samira Wiley, mainly, as well as other actors who were in Dangerous House, which was one of the plays that was performed here. I knew that the Times was going to write an article about the show and that they would use either my photos or the other production photographer’s. [The Times] wound up choosing two of my photos – that was fun.

How did you find out that they were going to use them?

My boss just bought a copy of The New York Times and put it on my desk, which was really cute!

You also do a lot of acting here. What’s been your favorite role so far?

So far, it has been playing Alexa, the Amazon Echo, which was in Chastens and Hastens written by Thomas Robertshaw ’19. I had a costume that was like a garbage can, but the top would light up, and I had to perfect the Alexa voice – it was so fun.

How did you practice the Alexa voice?

I got my dad to send me his Alexa for a month, and I would just ask her questions. [Laughs.] It was so funny.

So, you had a pretty interesting semester this spring. Any comments?

Yeah, last semester was something! I had brain surgery – that was fun. I started getting headaches every time I tried to concentrate on my work. I thought that I was just being a lazy student. Then I went to the health center and after several months, they realized that there was something wrong. I also experienced blurry vision a few times, which was a sign that there was something going on with my head. I got surgery at the end of spring break and came back to campus two days later and I was like, “It’ll be fine!” [Laughs.] I was so out of it for three months. I wasn’t allowed to laugh, sneeze, cough, blow my nose, stand upside down or exercise for two months. And they told me not to concentrate, which is a little tough here, but my professors were so understanding.

Okay, want to get into your family a little bit?

Yes, wait, want to hear a fun fact I shared at WOOLF?

Okay, from kindergarten to first grade, I started losing my hearing, but I didn’t notice and no one else noticed because it was so gradual, and I became good at reading lips. One day, my parents were like, “Hold on, Sarah isn’t responding unless she’s, like, looking at us.” [Laughs.] They took me to the doctor, who said that I couldn’t hear anything. It’s actually pretty common, but it just took longer to realize. So I had surgery, and they put tubes in my ears. What was funny is that because I was so little, the doctor explained my condition to me by saying, “There’s a bug that got into your system, into your body, and that bug is affecting your ears and makes it hard for you to hear.” So, my kindergarten mind was like, “Oh, I must have swallowed some kind of bug!” Like, an insect. [Laughs.]I thought that until I was in like the sixth grade!

Are you still really good at reading lips?

Tell me about your life in New York City.

So I grew up in an apartment building, and there were six other families that lived on the floor with me, and a few of them had kids my age. So even though I was an only child, and I grew up with my mom, I’ve never felt lonely because I would go up and knock on all these other kids’ doors and we’d hang out all the time. It was very much like living in the Eloise at the Plaza hotel. This one other kid and I would take drumsticks and knock on everyone’s doors. It was cool, because I think that in the city, you can also feel anonymous and very separated from your community, even though there are neighborhoods there aren’t, like, communities like that. Eventually, everyone on my floor became really good friends. We kept inviting them to our shows that we put on, and we started having weekly dinners, and our parents have happy hour every week, and now it’s this whole community of really crazy characters.

My family life is strange as a whole. My dad is Syrian and Jewish and my mom is Dominican and Catholic, and they broke up before I was born and decided to raise me as friends, so my experience with both of their cultures was separated. I didn’t pick one or the other – I would just sort of hop into both of them. I spent more time with my mom’s family, and my mom is a second-generation immigrant – her parents are immigrants. Back in the Dominican Republic we’re known for being “witches.” But they hid it.

Hold on, so your family is known for being “witches” in the Dominican Republic?

Just the women in my family. But in a really low-key way. Nobody knew about it until they came to the U.S. It comes from a really religious place. They were just so connected to the spiritual beings they believed in. Sometimes the women would start speaking in ancient tongues and wouldn’t be able to recall any of it. There’s a story of how my great aunt was praying in front of a statue and the statue started crying. They grew up in a really poor neighborhood, and it was around 10 kids to one tiny house, and it was this really small and religious community. There was this one woman who was really sick, and my great aunt went to the woman’s house with soup and was the last person to see her alive before she died. During the month after this, my great aunt was so sick and was saying things that an 80-year-old shouldn’t be saying, so they all thought she was possessed by the woman who passed away. So they kind of all gathered and, not exorcised, but prayed for her and then she just got better. [Laughs.] It’s so weird. And my grandmother breaks out into tongues all the time; it’s really funny. [Laughs.]

You’ve had a strange life.

Going forward, what do you think about your future? Do you see yourself pursuing acting long-term?

Not at all. I’m not sure what I want to do yet. I don’t even know what I want to study yet, but I know that whatever I do I just want to work with people, and I want to travel.