New WCMA exhibit interrogates ties between Hawai’i and the College 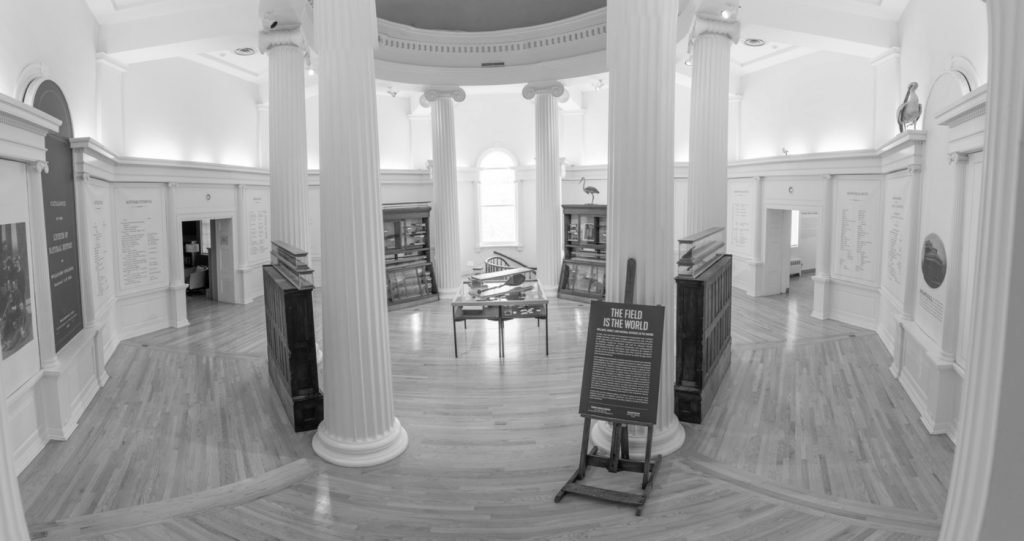 Material Histories, curated around a box of 64 artifacts found in 1986, analyzes the collecting practices of past and present campus institutions.

“On display” seems almost too passive of a phrase for the interactive exhibit The Field is the World: Williams, Hawai’i and Material Histories in the Making, a collaboration between the Williamstown Historical Museum, Special Collections and the Biology Department at the Wil-liams College Museum of Art (WCMA). The exhibit will be open through Jan. 2, 2019. To tune into the audio streaming overhead, visitors can check out headphones, follow along on a printed version of the script or simply walk through the exhibit. The multitude of options makes the exhibit accessible, immersive and interactive for everyone; visitors are encouraged to “continue the conversation” by emailing their reactions to WCMA. This provides a concrete way for people to  continue engaging with the art outside of the space to which it is confined.

Upon entering the exhibit,  visitors encounter a blow-up poster of the Haystack Monument, itself an attempt to mark “the beginning of the American Protestant missionary movement” (according to Material Histories researchers and affiliates). By placing the poster here as a direct reference to the monument located near Mission Hall, where the entries are named after four missionaries, the exhibit is once more able to escape the confines of the museum. Specifically, the exhibit draws heavily on the personal collection of one of these four, Samuel Chapman Armstrong, 1862, for the photographs, letters and other items on display. Seeing these places around campus – namely Mission Park and the Haystack Monument – will hopefully re-mind students, staff and visitors alike about the exhibit space. The exhibit also hopes to spur conversations about the College’s ties to Hawai’i, because the bulk of the artifacts on display are of Hawaiian origin and come from the 1986 discovery of a box that belonged to the College’s student-run Lyceum of Natural History club. The Lyceum, spearheaded by taxidermy and kupe’e niho ilio (dog teeth ankle adornments for hula) enthusiasts, ran from 1835 to 1908. Their collection of 19th-century Hawaiian artifacts is troubling because it captures the mindset of classical ethnographers who were on quests to “liberate and enlighten the island savages.” Generally speaking, collecting the artifacts of another culture means depriving those it represents of their own history. Thus, not only were the 19th-century Hawaiians relegated to specimens or objects of study as a consequence, but they were also not given the chance to better understand themselves since colonizing presences assumed that they could do a better job of understanding Hawaiian culture than native Hawaiians.

Yet, it is difficult to pinpoint how the Lyceum members would have viewed the project. We cannot erase the College’s history, which involves being complicit in this ethnographer mindset. But we can still do our part by hearing out what displays like this have to say. Not pictured in the exhibit are the hours spent on our end preserving the artifacts and opening the discussion to people beyond the College. It would be so easy to keep controversial parts of our history locked away in special collections, but displaying them forces us to continuously grapple with what went into shaping this historical record.

On the right wall of the exhibit room are two 19th-century timelines that escape the frame – wrapping around corners and luring the eye with its vibrant heliotrope and vermillion. The timeline above chronicles events at the College while the one below details Hawaii’s history. In the middle is a subtle nod to color theory: a text-free streak of navy which invites visitors to fill in the space or the blanks. Stacking both timelines in this manner lets visitors map out the influence and exchange between the College and Hawai’i. This design choice reflects the same way that red and blue mix to make purple. The present-day designer doesn’t really view the missionary movement or our interactions with Hawai’i as a one-sided “save the third world” dynamic. We typically think of centers, like this blue band, to be where things coincide, or where there’d be overlap in the events at each location. Instead, it becomes space for processing the influence across both sides (notable exception being Sanford B. Dole, class of 1867, becoming President of the Republic of Hawai’i) in terms of political and personal paradigm shifts. It’s also a sly nod and thank-you to these Hawaiian artifacts and the Hawaiian histories that reside in them for shaping the College – essentially, you cannot arrive at purple without the red.

Making Material Histories is also at the forefront of many of WCMA’s open lectures. Those interested are invited to attend the program at 7 p.m. today titled “Making Ma-terial Histories: Curating the Kalākaua Era in the 21st Century,” presented by Healoha Johnston, a curator from the Honolulu Museum of Art.