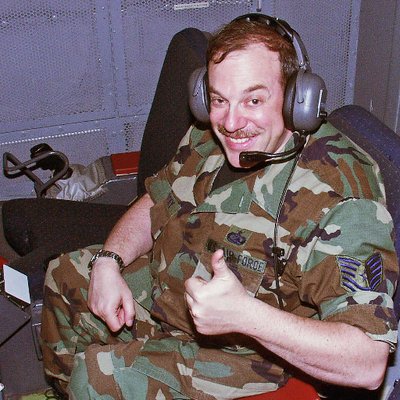 Gym monitor Howard Garbarsky began working at the College while at studying at MCLA to write his screenplay, “The Atomic Voles.”

Most students’ interactions with Athletic Facility Monitor Howard Garbarsky consist of a quick “thank you” when entering Lasell Gym or a jog back to the front desk for a forgotten swipe. When not scaring swipe-forgetters with his shrill whistle, Howard spends his time writing screenplays composing poetry and taking photos. I first learned of Howard’s artistic side this past fall at Yom Kippur break-fast dinner, and recently sat down with him again at the front desk of Lasell to discuss his upbringing, past jobs and current projects.

Rebecca: How did you get into screenwriting?

Howard: I had an idea that I was trying to develop, and decided that the best way to get it made into a movie was to write it. I went back to MCLA [Massachusetts College of Liberal Arts] to become a screenwriter. I also joined an independent filmmakers group upstate in Albany in 1995 called the “Upstate Independent Filmmakers Network” (UIFN), and I eventually became the president of that, so it was kind of a dual thing where I did both at the same time: wanting to become an independent filmmaker and have my vision realized rather than depend on Hollywood to have my screenplays made.

Rebecca: What was your original idea that inspired you to study screenwriting?

Howard: My original idea was for a movie called “The Atomic Voles.” Voles are like large mice; they’re quite destructive around your garden, and they’re kind of cute too. They look like hamsters. I came up with the idea when I had some hamsters for pets at one point. When they stand up and look around, they look kind of like people if you have a great imagination.

Rebecca: What’s the plot of  “The Atomic Voles”?

Howard: When a young prince from an alien planet stows aboard the first spaceship going to Earth, he discovers his ship has been sabotaged as part of a coup against his father. After his ship crash-lands on Earth, he has to fight to survive and get back to the planet in time to stop the coup and save his family.

Rebecca: Are you working on any other projects?

Howard: I have a lot of different things. I also wanted to tell a few other stories that I had. One of them was about my father, who was a prisoner of war in World War II [and] led 700 other prisoners of war out of the camp in northern Germany. He was captured in August of 1944 [in] France. He could speak Polish, Russian and German quite fluently, so he became a translator. What they didn’t know was that he was a Jew. Like myself, he’s a very stubborn guy; if he didn’t like what the Germans were saying, thought it was against the Geneva Convention, he would refuse to translate it, so he got beaten a lot for that. I think it’s a very compelling story.

Howard: I’ve also been working on a documentary about the community my father came from, which was in southern Rensselaer County. It’s on the road between Pittsfield and Albany on Route 20, in an area that was settled as an agricultural community between the 1890s and 1950s. The documentary is about the Hebrew Farmer’s Association. They were one of several agricultural communities that were settled by the American branch of the Baron de Hirsch association. They would take people [from Europe] and bring them over here and guarantee mortgages for them because of the pogroms at the end of the 19th century in that area.

Rebecca: Have any of your screenplays been performed or made into films?

Howard: I ran a screenwriter’s group as part of an offshoot of UIFN for a number of years. We would do stuff like table reads, and then we also had this thing that Upstate did that was movies without pictures, where they did a table read of your screenplay with actors, so I’ve had my screenplays read. I haven’t had them made into a film; I’m hoping that my documentaries will get some notice and then I’ll get a chance to get some funding for some of my theatrical films.

Rebecca: What was your line of work before you started screenwriting?

Howard: I had a mail order cutlery company selling high end and custom-made knives. The first time I went to school after I got out of the Air Force, I took environmental studies and I took winter survival. We had 10 people, it was very cold and we built a big trench fire and we were trying to gather as much wood as we could. I went and looked around and saw a standing dead cherry tree, about 10 inches in diameter, and I tried to cut it down with my sheath knife. Very soon I realized that this knife was not designed for chopping. I had to use a small survival saw; it took me two hours to saw through this thing. All of a sudden, I got very interested in knives; this tree haunted me, it’s like one thing gets into my head and I have to figure it out, so eventually I started my own company. I had custom knife makers making knives for me. I designed a knife that would’ve done the job had I been able to have it at that point. I tried to have a couple of blade-smiths make it for me. But it still wasn’t right, so I found a local blacksmith and he gave me blade-smithing lessons and I made my own knife. I took a similar diameter piece of hickory and I chopped it in two in about two minutes with this thing, and that’s what got me interested in knives.

Rebecca: What did you do in the Air Force before you began the knife business?

Howard: When I was in high school my father had a catastrophic illness. He had surgery, he couldn’t work, so he had to sell his business. Basically, he had something like $60,000–$80,000 worth of hospital bills because his insurance wouldn’t cover it, and everything that they had saved for my brother and myself to go to college had gone towards hospital bills. I was working as a photographer, I got laid off and I wanted to send money home to my parents. So, rather than going to college – I would have had to take out a bunch of loans – I went into the Air Force, and became a photographer. I would send half my paycheck home every two weeks.

Rebecca: How did you get into photography?

Howard: When I was in high school, I took an advanced workshop with this guy from Stockbridge who was very famous for his pictures of Tanglewood and Music Inn called Clemens Kalischer. He became like a mentor to me; he passed last year, unfortunately. The other photographers literally called me “The Kid,” because everybody else in the class was in their 30s and 40s.

Rebecca: Do you do any other forms of art?

Howard: I wrote several poems about growing up. One of my first poems was about listening to the trains; growing up, I never had an easy time falling asleep at night, so I used to listen to the trains going by and that would lull me to sleep, the clickity-clack sound of the rail carts going by. I guess what it all comes down to is that I like doing creative things, whether it’s making a knife or making a film or writing a screenplay. I like creating things out of my experience, and I think to be a good writer you have to have a lot of different experiences to weave all that into a narrative.

Rebecca: How did you start working at the College?

Howard: When I started working at Williams, I decided to do something to make some money when I was going to school. I wasn’t really making any money selling knives, it was kind of hand to mouth. I was working part time here and going to school. I stayed because I had a lot of trouble when I started off writing. In my 40s I found out that I had ADD [Attention Deficit Disorder] and that I was dyslexic. I always had a hard time writing, I couldn’t spell, I really couldn’t order my thoughts very well to write things down. It was a real struggle for me, and I really wanted to become a writer. To get back to the tree thing here, once there’s something I get hung up on, and writing the story of “Atomic Voles” was something I got hung up on, I don’t quit. So, I decided I’d become a writer, hell or high water.

Rebecca: How have your diagnoses of dyslexia and ADD affected your writing?

Howard: I went and got an associate’s degree through the Air Force, the Community College of the Air Force, and one of the requirements was taking English composition. I had a hell of a time in English comp.: the first time I basically flunked out because I just couldn’t write a paragraph, I couldn’t write two paragraphs and put them together, I couldn’t write four paragraphs and make a page out of it. I found screenwriting to actually be a lot easier because it’s broken up and there’s different parts to it, and the more I practice screenwriting, the more my writing has improved, but it’s been a struggle. I think anything you have to struggle for is worthwhile, whether it’s chopping down a tree or writing a screenplay. Unless you’re really committed to it and you really latch onto it and really give it your all, you might get mediocre results. If you want excellence, you have to fight for it.