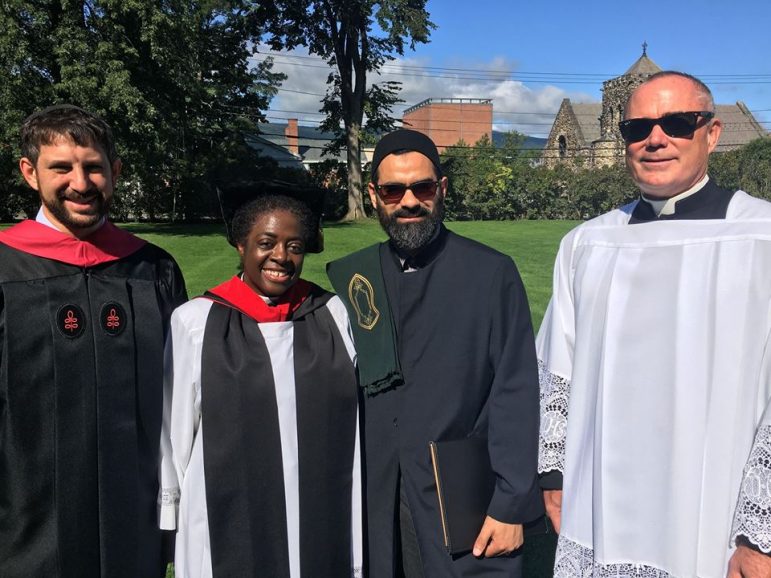 Many offices in upstairs Paresky offer a candy bowl or a pile of free pens, but only the Chaplains’ Office offers an “inspiration tea station” equipped with a kettle, tea bags, honey, sugar packets, stirrers and cups. Inside are the offices of the College’s four chaplains – Chaplain to the College and Protestant Chaplain Reverend Valerie Bailey Fischer, Muslim Chaplain Imam Sharif Rosen, Catholic Chaplain Father Gary Caster and Jewish Chaplain Rabbi Seth Wax.

Bailey Fischer is a Philadelphia native who worked as a journalist before assuming her current role as a third-generation Episcopalian minister. “Each chaplain holds services,” she said, but “meeting with students is a lot of what we do.” She stressed that the Chaplains’ Office, like the Office of Student Life and Office of Academic Resources, is a “student-facing office,” meaning it exists purely for student support, which sometimes comes in the form of simply attending events and performances. “We support the students when they do the programming, just to say, ‘Ra ra, that was great,’” Bailey Fischer said. “Seriously! If you think about it, you want somebody to show up. That’s a great part of the job.”

Bailey Fischer, who began her tenure in July 2018, was particularly excited to come to the College because of the Chaplains’ Office annual Spring Break Out Trip to Tuscaloosa, Ala. Joined by all four chaplains, students, regardless of religious affiliation, volunteer for Habitat for Humanity and attend Christian, Muslim and Jewish religious services.

Rosen grew up in Los Angeles and, as a child, planned on being an NBA player. He is the assistant director of the Center for Learning in Action (CLiA), a role that has been combined with that of the Muslim chaplain for many years. In addition to the many programs he oversees, Rosen founded the Positive Pathways Partnership (P3) program based at the local Berkshire House of Corrections, through which students tutor inmates and lead a book club. Rosen was inspired by his work as a former volunteer chaplain for the Vermont Department of Corrections. He says he is “really grateful” for the work done through the prison and believes in its value for the students and inmates. “They’re going in expecting to teach, and they come out feeling that they were taught, that somehow they learned something new about the human experience,” Rosen said.

Rosen counsels students who want to get involved with volunteering through the Lehman Council or CLiA. He does not tell students what they should be passionate about based on where they’re from or what they’re studying. “Sometimes students want to do something completely different from what they’re doing in the classroom; sometimes they’re on the pre-med track but they want to do something much more literature and humanities focused in terms of their service work,” he said. He describes his role as “sitting with a student and saying, ‘Tell me more about that.’”

A Southern California native with training in congregational ministry, Caster has spent the last 26 years working in education. In his first week as a student at the University of Southern California, he visited their Newman Catholic Center. “Nobody said hello to me, nobody reached out to me and I never went back,” he said. Here, Caster tries to do the opposite, and he has an appreciation for the small size of the College. “I like that the students let me know what they need from me and how they need me to be and who they need me to be,” he said.

Caster enjoys speaking at classes and getting students involved outside of campus. Williams Catholic, the College’s Catholic student group, frequently takes trips, but Caster stressed, “All of our activities are open to everyone. You don’t have to be a Catholic to take a trip with us somewhere.” He also teaches interested students how to fly-fish, and he will pay for any student to go golfing with him. “Sharif golfs,” Caster said. “He’s very good, and we’ve all gone out to play.”

Wax is from Sharon, Mass. His career aspirations at one point involved becoming a professor of Buddhist studies, but he eventually decided to be a rabbi. As a member of Sexual Assault Survivor Services (SASS), Wax and other staff are on call on a rotating basis to provide support to students who have experienced sexual assault or stalking. He also leads small, informal learning groups which are open to all. “One learning group is doing approaches to mystical prayer in Judaism; another group is reading contemporary Israeli midrash,” he said. Along with Associate Professor of English Bernie Rhie, Wax leads day-long meditation retreats during Winter Study.

Wax also received a Towards Inclusion, Diversity, and Equity (TIDE) Grant with Integrative Wellbeing Services (IWS) Fellow Ruby Solomon and Professor of German Gail Newman. “This was for faculty and staff to explore whiteness: what that means, how that plays out and how to do antiracism work,” he said. The group meets once a week and works through a book. Reflecting on his schedule, he realized, “Most of what I do actually is not so religious.”

Despite the many ways the chaplains engage with the campus, one of their central commitments is counseling students individually, regardless of their faith identities. “In fact, I don’t even know the religious background of many of the people I talk to,” Bailey Fischer said. “But we’re here for them, and we’re here to help them be students, and what you do with that, that’s your business.”

All of the chaplains echoed these sentiments. “The main thing is working with students across religious backgrounds,” Wax said. “For me, it’s students who are Jewish and students who are not, with different or no faith traditions.”

According to Caster, “everything we do is interfaith.”

Rosen blocks out significant time in his schedule in case he needs to counsel a student in crisis. “We’re here to sit with them nonjudgmentally, to help assure them that they’re not alone, they’re cared for and valued, and we’re here to listen with compassion and concern,” he said. And, as always, the inspiration tea station is always there, with or without an appointment.