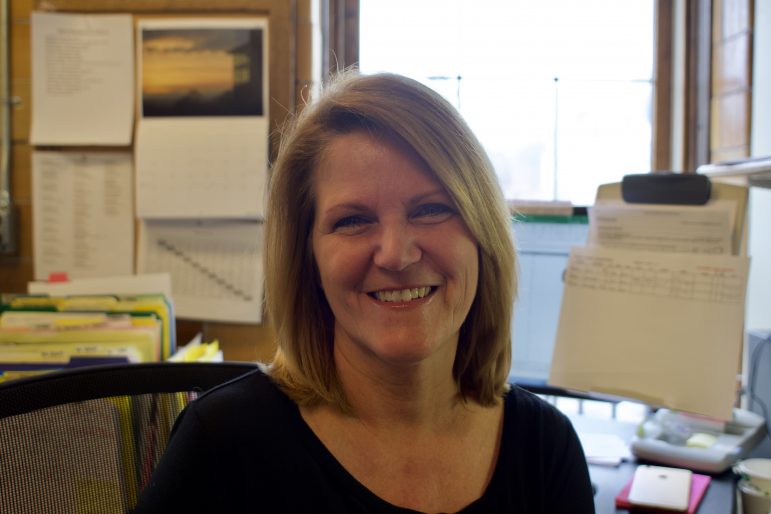 Athletics’ travel coordinator and team scheduler Tammy Wright is in her 29th year at the College.

Athletics’ travel coordinator and team scheduler Tammy Wright is in her 29th year at the College.  Aniah Price/Photo Editor.

Wright’s role at the College, however, goes further than this. Wright, a North Adams, Massachusetts native who has been at the College since 1990, also created and runs the athletic department’s annual fundraiser for Berkshire County’s Hillcrest Educational Centers. Hillcrest is a not-for-profit organization that offers residential programs for youth with psychiatric or behavioral disorders.

While in her fifth of now 29 years at the College, Wright started a toy drive that donated to a few different local non-profits. Then, she saw an article about Hillcrest. “I reached out to them and now we have been working with them for 18 years,” she said.

“It’s amazing,” Wright said of the effort. “I think it is an eye-opener to a lot of people who participate when they see [requests] coming through for just batteries or a pair of socks.”

After the gifts are purchased, whether by Wright, coaches or students, the department hosts a present-wrapping party. The gifts are then brought down to the organization’s five centers between Lenox and Pittsfield.

In 2004, in the program’s fourth year, Wright and the athletics department received an award from Hillcrest for their donations and support. “That has been a blessing for me,” Wright said. “To be able to do this for those kids.”

As the annual fundraiser approaches its 20th anniversary in 2020, Wright said she feels confident that it is not ending anytime soon. “As long as I’m here, I’ll do it,” she said. “Then hopefully, I’ll pass it on to somebody.”

Wright attributes the idea’s success to how involved athletics teams have been. “I know that they see that it is such a great cause,” she said. “Our teams are very active in supportive roles throughout the community, but this one seems to be unique in that it is across the whole department.”

This interconnectedness is typical for Wright, who, in her role as scheduler, is used to working with every part of the athletics department. Arranging travel accommodations for the College’s 32 varsity teams, many of which often advance to last-minute tournaments such as Nationals, requires it.

“I love my job. I love it, every aspect, but your mind does scramble quite a bit,” Wright said. “It’s very stressful at times, but if I didn’t love my job, I wouldn’t have lasted this long.”