Ephs win one of two at NCAAs 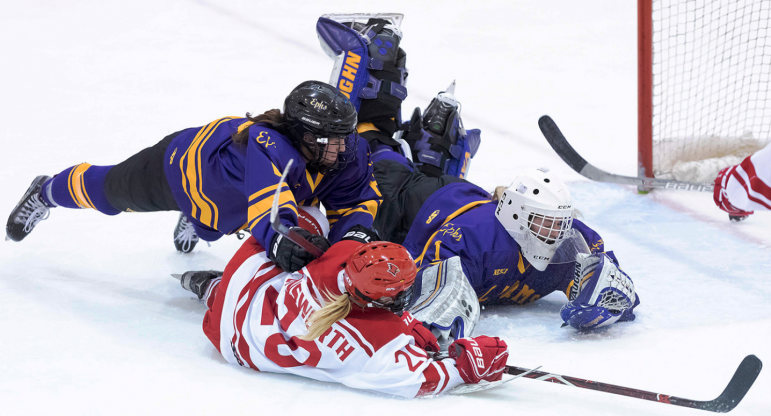 No. 7 women’s ice hockey (21–5–3, 10–4–2 in the NESCAC) hosted and won its first NCAA tournament game in program history, a 3-1 victory over No. 8 Norwich on Wednesday night. The women advanced to the quarterfinals, where they fell 5-3 to No. 2 SUNY Plattsburgh on Saturday.

The loss marked the end of a record-breaking season for the Ephs. The women won a program-best 21 games en route to their NESCAC championship and first-round NCAA tournament victory.

“It was really hard to see a historic season come to an end,” head coach Meghan Gillis said after the game. “I want to thank our six seniors for everything they did over the last four years that built to this season.”

The week began on Wednesday night, when the women opened the NCAA tournament at home against Norwich, the defending national champion. The contest marked the first-ever NCAA tournament game at Lansing Chapman Rink.

After first-round exits in their previous two tournament appearances in 2003 and 2014, the women entered the matchup looking for their first victory in the tournament.

The Ephs started off slowly in the first period as Norwich outshot the women 9-6. Goaltender  Chloe Heiting ’22, however, denied the Cadets a goal during the opening frame.

The women scored the first goal of the game at 3:27 into the second period when assistant captain Abby Brustad ’19 buried the puck off a rebound from NESCAC Player of the Year Meghan Halloran ’21. The one-goal lead did not last long, however, as Norwich responded with its own goal a few minutes later. Cadets forward Amanda Conway netted her Div. III-leading 30th goal of the year on a power play to tie the game.

Heiting then made one phenomenal save after another, the most important being a sprawling kick on a Norwich two-on-one opportunity in the second period. The Cadets outshot the Ephs 18-8 during the frame.

“I think we had a little bit of nerves starting out for the NCAA game for everyone,” said Gillis, “Chloe made some huge saves and let us settle in.”

At 5:39 into the third period, a slap shot from All-NESCAC defender Brynn Puppe ’21 deflected past Norwich goalie Emily Lambert to give the women a 2-1 lead. Soon after, Avery Dunn ’21 extended the lead to 3-1 to eliminate the defending champions.

“We had just been told to throw pucks at the net,” Puppe said postgame. “We hadn’t been testing the goalie enough, so it was just important to get pucks to the net quickly.”

Brustad  and co-captain Annie Rush ’19 assisted on the winning goal by Puppe, while Amanda Reisman ’20 and assistant captain Eliza Quigley ’19 earned assists on the Dunn tally.

“We were really motivated by Chloe’s amazing save since she was doing her job and so it was time for us to step up and do our job,” Puppe said.

The women then advanced to a quarterfinal matchup with second-ranked Plattsburgh on Saturday. After going back and forth in the third period, the Ephs fell 5-3 to the Cardinals following two successive Plattsburgh goals – separated by only 8 seconds – in the 12th minute of the final frame.

The women started perfectly with a goal 19 seconds into the contest off the opening faceoff. After receiving the puck from Mia Carroll ’20 and Brustad, Halloran skated around Cardinals goalie Kassi Abbott and tallied the first goal of the game. For the remainder of the period, Heiting kept the Cardinals from equalizing.

Plattsburgh began the second period with a series of shots on Heiting until Madison Walker eventually found the net 3:08 into the period. The Cardinals then pulled ahead 2-1 with another goal from Holly Schmelzer with 15:32 left.

Although the Ephs capitalized on a one-man advantage from a Cardinals interference penalty and evened the score at 2, Plattsburgh responded a minute later with a goal from Mackenzie Millen with 3 minutes left in the period to retake the lead.

The Ephs tied the game again at 8:19 into the third period off a zone-entry rush. Halloran drove wide, and Brustad drove to the net hard. Halloran then passed to Brustad, who deflected the puck over Abbott’s glove.

The women could not capitalize on the momentum, though, as Plattsburgh retook the lead for good with two goals 8 seconds apart in the final 10 minutes.

“We couldn’t have asked for a better start to the game,” Gillis said. “I loved the resiliency our team showed coming back to tie it at the start of the third.”