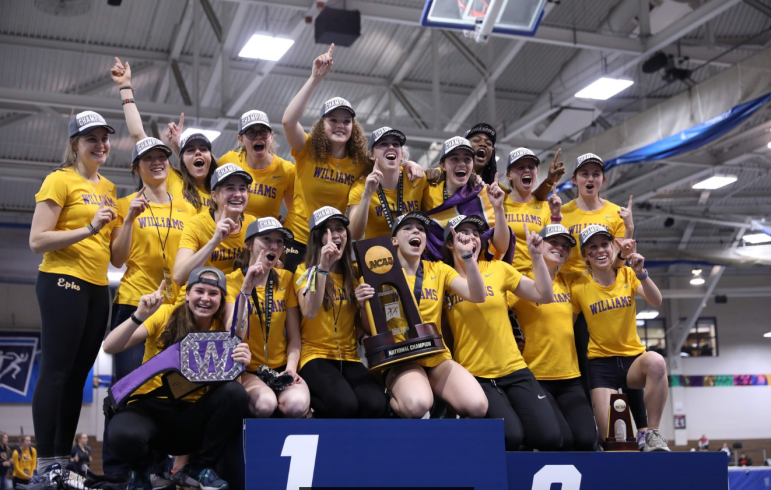 No. 1 women’s track and field won its second NCAA title in program history last weekend. The women earned 42 points at the meet, held at the Reggie Lewis Center in Boston. Washington University finished second with 40 points, and George Fox came in third with 29 points.

“It’s a great day to be an Eph,” head coach Nate Hoey said. “This team has faced so much adversity all season and never once have they held their heads down. They consistently look forward and to what’s in front [of them] and what they can do to maximize where they are. I’m so proud of this entire team and what they have done.”

Starting Day One of the competition was Caitlin Ubl ’19 in the 60m hurdles prelims. Ubl came into Friday’s race seeded seventh but finished second in her heat with a personal and school record of 8.66 seconds. Kiara Tan ’22 raced next in the 60m prelims, where she finished 19th overall.

In the pole vault, Kelsie Hao ’21 missed only one bar until her final height. Hao finished with a height of 3.80 meters, just 2 centimeters shy of her personal best. The jump placed Hao in fifth place, which earned 4 points for the team. Maggie Murphy ’19 placed 13th in the event with a final jump of 3.60 meters.

Anna Passannante ’20 competed in both the mile and 800m. In the mile, Passannante won her heat with a time of 5:03, putting her in fourth place going into the next day’s finals. Just an hour later, she took fifth place overall in the 800m prelims. In the 5000m, Emily Harris ’19 crossed the finish line in 17:29 to clinch 14th place.

Thomas also competed in the pentathlon, finishing in fifth place with 3507 points and securing four points for the team.

Day Two of competition began with the high jump, in which the Ephs were represented by Emma Egan ’20 and Kene Odenigbo ’19. Odenigbo jumped the second-best height she has cleared all season, breaking her seed to finish in 14th. Egan achieved a perfect jump performance, missing no marks until the final height. The highest jump she cleared, 1.77 meters, secured a national title for Egan, who also set a personal best and school record.

Ubl was next on the track in the 60m hurdles finals. Coming into the race seeded seventh, Ubl finished in 8.84 seconds. The time was good enough for Ubl to break her seed and place sixth, winning the team 3 points.

Going into the team’s final event, the 4x400m relay team, the women were behind by only 3 points. In order to win the national championship, the team needed to come in fifth place or better. Collison, Dunn, Ubl and Powell secured fourth place, scoring 4 points for the Ephs and clinching the title. With Collison coming out quickly in the first leg and taking the lead, the rest of the team held it. With each leg of the relay, the women created more and more distance between the majority of the heat to finish in a time of 3:50.

“This was a total team effort,” Hoey said. “The energy and support for and from everyone was awesome.”

The national championship wrapped up a highly successful indoor season for the Ephs. The women finished as national champions, New England champions and Little Three champions. In two weeks, the Ephs will return to competition with their first meet of the outdoor season at University of California, Riverside.