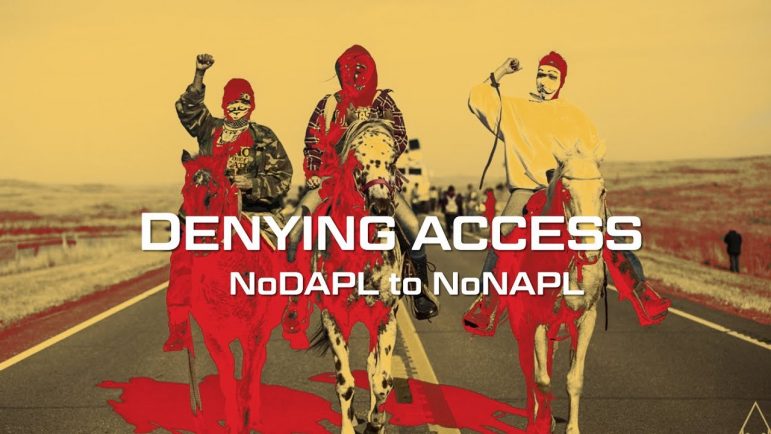 Students, faculty and Williamstown residents gathered at Images Cinema last Wednesday night for a special screening of the documentary Denying Access: NoDAPL to NoNAPL, followed by a Q&A session with the filmmaker, Jason Corwin. Denying Access chronicles the campaign among various Native American groups to halt the construction of oil pipelines through sensitive and sacred lands. Sponsored by the Class of 1963 Sustainability Fund, which works to create learning opportunities connected to environmental issues, the screening and Q&A with Corwin provided an opportunity for community members to engage with a passionate showcase of Indigenous environmental activism.

“The important nature of stories in our culture and in our ways of teaching makes literature and film very viable formats for not only conveying old stories but our stories of now that are as varied as our people are diverse,” Corwin, a member of the Seneca Tribe, told the Ithacan.

The events began with Assistant Professor of Environmental Studies Laura Martin introducing Corwin, the executive director of the Seneca Media and Communications Center. A 25-year veteran in documentary filmmaking, Corwin is an outspoken advocate for the environment and indigenous rights. He’s also an educator, teaching classes on film production and storytelling.

The film begins with the interview of an elderly Native American woman while a chaotic protest occurs in the background. As she speaks, a police officer is heard speaking through a PA system, warning the protestors that they will be arrested if they do not disperse.

This provocative sequence sets the tone for the rest of the film. While many of the documentary’s earlier scenes are marked by simmering tension between protestors and law enforcement, it does not take long for this tension to explode. Officers are shown raiding tents and trailers armed with rifles. Protestors face sound cannons, rubber bullets and pepper spray. At one point, a pipeline worker with a rifle walks into a crowd of protesters, leading to a standoff before the man is arrested by an officer of the Bureau of Indian Affairs.

While the film does not shy away from showing the trying circumstances faced by protestors in the movement against the Dakota Access Pipeline, it is not just a sequence of violent acts. Much of its runtime is spent on interviews with those involved, highlighting the motivations behind the grassroots movement. The sentiment that water ought to be treated as a sacred resource was echoed in many of these interviews. Many interviewees also invoked the image of the pipeline as a “black snake” threatening to desecrate their lands.

Denying Access emphasizes the outpour of support these movements received from people throughout the world. One scene shows actor Mark Ruffalo speaking passionately in support of the movement at a press conference. Other scenes highlight musicians such as Kiera Dawn and Savage Family performing songs in solidarity with the DAPL protest. Despite the violence that characterizes much of the film, these scenes of support work to create a tone of hope.

During the Q&A session, Corwin displayed the same passion and enthusiasm that represent the movement. He provided urgent and sweeping answers to the questions that were posed. In response to a question about the status of the battle against the Northern Access Pipeline, he gave a detailed rundown of court cases and legal issues surrounding the project. He also criticized the policies of both the Democratic and Republican parties, and discussed how he believes contemporary forms of media, with their emphasis on fast-paced coverage, are shortening attention spans and negatively impacting social movements.

“I hope people will be just inspired to see that everyday people have power to affect change in the world for the good and that people see that the environment and indigenous rights issues are [of] paramount importance,” Corwin said.