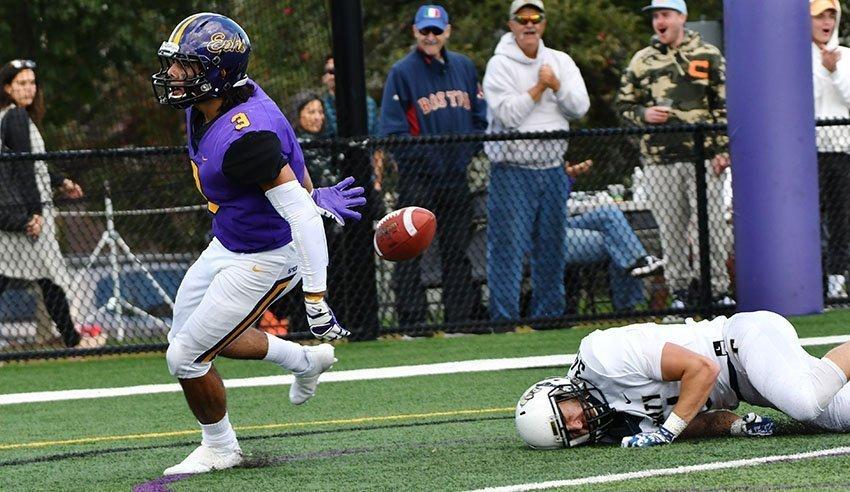 Last Saturday, football (3-0, 3-0 in the NESCAC) scored 14 unanswered points in the third quarter en route to a 21-16 win against defending NESCAC champion Trinity, snapping the Ephs’ losing streak against the Bantams.

The Bantams controlled the pace of the first half, outgaining the Ephs 200-141 yards and consistently getting into the red zone. But each time Trinity drove inside the 20, the Williams defense held. In the first half, Trinity had three red-zone possessions and only came away with a field goal each time.

Williams had only one first-half red-zone drive but scored a touchdown on a seam-route pass from quarterback Bobby Maimaron ’21 to tight end Justin Burke ’21, which put the Ephs up 7-6 before Trinity kicked a field goal to score the last points of the half.

The Ephs made halftime adjustments and outscored the Bantams in the third quarter. This is not surprising since the men have previously outscored their opponents 45-0 in a third quarter play this season. The Ephs’ first drive of the third set the tone for the rest of the game, as Trinity didn’t score again until very late in the fourth.

Trailing 7-9, the Ephs opened the second half by driving all the way downfield in just 1:15 to put themselves on top for good, 14-9. The drive was sparked by two passes from Maimaron to wide receiver Frank Stola ’21, the first being a 45-yard deep bomb down the middle and the second being a 21-yard touchdown in the back left corner of the end zone. Trinity drove right back down the field, but on the third down, linebacker TJ Rothmann ’21 jumped a pass from opposing quarterback Jordan Vazzano, intercepting it at the goal line. After Maimaron briefly left the game due to injury late in the third quarter, the coaching staff called a deep pass on the first play for quarterback Jackson Bischoping ’22. Bischoping delivered, unfurling a perfectly thrown dart that Stola caught at the 15-yard line and took all the way into the end zone to put the Ephs up 21-9.

Nothing seemed to go right for Trinity after the half. Late in the third, a fake punt attempt on a fourth down led to just a six-yard gain, giving Williams possession inside the Trinity 40-yard line. In the middle of the fourth, when the game was still well within reach, Vazzano was intercepted by defensive back Ben Anthony ’20. On the Bantams’ second-to-last possession, Vazzano completed a pass that would have been good for a first down, only to see defensive back Desmond Butler ’19 force a fumble, which the Ephs recovered.

With under two minutes to go, Vazzano exploited a blown coverage on a 73-yard touchdown pass that cut the deficit to 21-16. In order to win, the Bantams needed to secure possession with an ensuing onside kick that went out of bounds, allowing the Ephs to kneel out the clock from there.

Out of Trinity’s eight second-half possessions, two resulted in interceptions, two in turnovers on downs, two in punts and one on a lost fumble, with only the final drive of the game resulting in points. For the second half and the game, the Ephs won the turnover battle 3-0.

“We knew we were going to have to weather some storms early, and offensively. We did enough in the first half to give us some breathing room, and the defense made some great stops,” head coach Mark Raymond said, commenting on the Ephs’ approach during the game. As for halftime adjustments, Raymond gave the credit to his assistant coaches and players. “It’s just the coaches doing a fantastic job,” he said. “We have a bunch of guys who can make adjustments on the run. They work so hard, they prepare so hard and they’re able to do those types of things.”

Maimaron completed 12-of-25 pass attempts for 154 yards and two touchdowns. Returning after not playing last week against Colby, Stola caught five passes for an impressive 138 yards and two touch downs. Rothmann was all over the field, registering the pivotal end-zone interception along with a fumble recovery, 15 total tackles and 2.5 tackles for loss.

Next Saturday, the Ephs will travel to face Bates at 1 p.m.