For the first time, president, provost, deans of college and faculty positions are all held by women 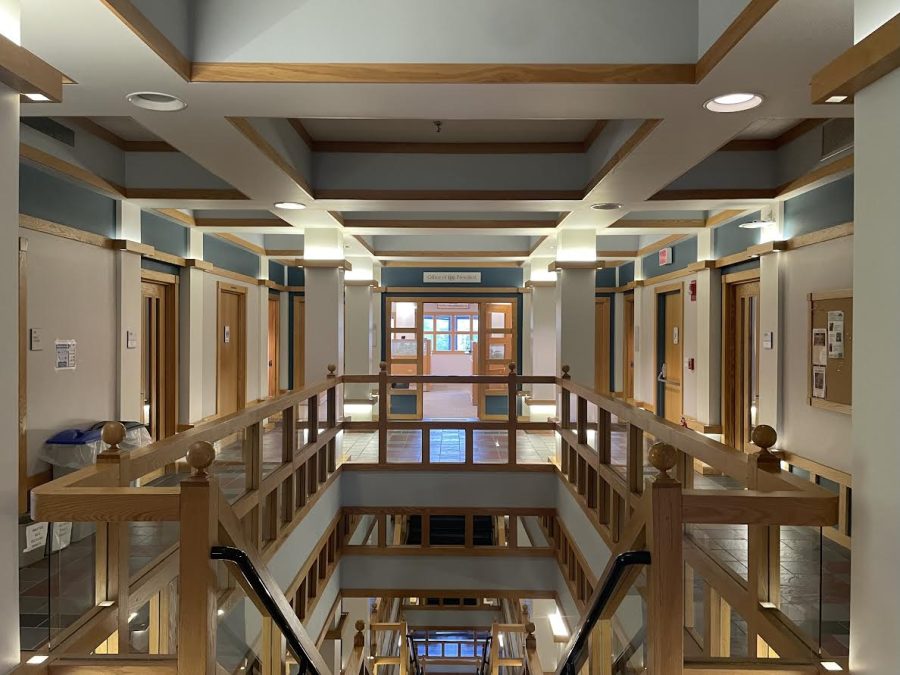 The office of the president is located on the second floor of Hopkins Hall.

For the first time in the College’s history, all four academic members of the senior staff — the president, provost, and deans of the faculty and the college — are women.

This milestone coincides with the 50th anniversary of women attending the College, albeit by complete coincidence, President Maud S. Mandel said in an interview with the Record. “It’s great to see pathways of women’s leadership at the College that have developed over time crystallized in this moment,” she said.

Mandel, Provost Eiko Maruko Siniawer ’97, Dean of the College Gretchen Long, and Dean of the Faculty Safa Zaki work “extremely closely together,” Mandel said. All of senior staff meets twice a week, and the four academic members — together called the Academic Affairs Group — meet weekly as well. Pairs within the group also connect regularly throughout the week.

Although the group is usually too busy to have this milestone at the forefront of their minds, Long said the fact “hits home” during public events, such as a reunion that she, Siniawer, and Assistant Professor of Physics Katharine Jensen hosted for the Class of 1971. “We were sitting up there, representing Williams, all women,” Long said. “For men of that age, that must feel wild.”

Three of the four academic members of senior staff — Siniawer, Long, and Zaki — are women of color. “Gender is one of many aspects of identity to be considered when it comes to the continued diversification of the academy and its administrative leadership,” Siniawer said.

Discussions among the Academic Affairs Group typically revolve around faculty or educational matters, such as masking policies in the classroom, support for professors given increased enrollment, and potential topics of upcoming faculty meetings, according to Mandel. The group’s long-term goals are focused around the curricular and co-curricular aspects of the College’s Strategic Plan, which “involves every corner of the campus,” she said. “They’re wonderful assets to the College,” Mandel said of Zaki, Siniawer, and Long. “They’re compassionate, incredibly hard workers, and really devoted to Williams and making it be the best it can be — and that comes through.”

Mandel, Siniawer, Long, and Zaki have only been working together for a few months, as Long and Siniawer assumed their current roles over the summer. Long and Siniawer, however, were both hired around 20 years ago to work in the history department and both received tenure around the same time. Long has an “easy relationship” with Siniawer, she said. “I’m a huge admirer of her work, of her teaching.”

Siniawer has appreciated the few months they’ve spent working together, she wrote in an email to the Record. “I’ve very much enjoyed our ability to share different ideas, disagree constructively, and work through issues together,” she wrote. “It’s hard to say how much of this dynamic is shaped by the four of us identifying as women, in part because I have no basis of comparison and, more importantly, because our identities are much more complicated than, and extend beyond, gender.”

While the members of senior staff did not attribute the group’s success to its gender or racial makeup, Mandel highlighted the importance of diversity within leadership roles. “It’s not so much that women lead differently, per se,” she said. “It’s that now anyone who’s younger can say, ‘I can be the president of the college. I can be the dean.’ … It’s about creating models of possibility — that’s what all diversity does.”

In 1970, Nancy McIntire became the College’s first female assistant dean. “We agreed that I would not be called the dean of women, although most people frequently assumed I was and would introduce me that way,” McIntire said in an interview published in Williams Alumni Review in 2006. “I always corrected them… I constantly reminded all of us that this was a shared responsibility, even though I was hired to make sure the transition for women was as smooth as it could be.”

“As a historian, I appreciate this development as a reflection of the gradual increase in the numbers of women in academia over the past several decades,” Siniawer wrote. “It has taken time and effort for there to be a meaningful percentage of women in the full professor ranks, such that women would be candidates for, much less appointed to, senior administrative positions.”