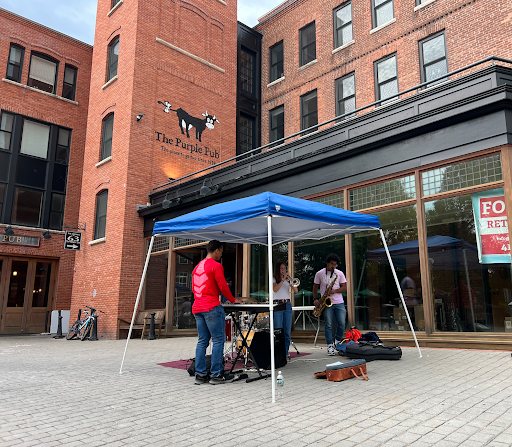 When Nigel Jaffe ’22 visited the College this past weekend on his way to a concert in Saratoga Springs, N.Y., he expected to find his alma mater quiet and sleepy on a Sunday afternoon early in the fall semester.

To his surprise, Spring Street was abuzz with art. Musicians, artists, and vendors selling wares lined the sidewalks for the final iteration of this year’s Summer Sundays series.

“I was getting Lickety Split with a friend and was thrilled to find that there’s live jazz going on up Spring Street,” Jaffe said. “This is the perfect way to spend your afternoon here in Williamstown. Ice cream is best served with jazz.”

The street festival series, organized by the Williamstown Cultural District,  featured two afternoons of public art and activities this summer, the first of which was held on July 17. Sunday’s festival was intentionally timed to coincide with ArtWeek Berkshires 2022 — ten days from Sept. 15–25 presented by the five Cultural Districts of Berkshire County.

Walking down from Route 2 to the Williams Inn, festivalgoers passed by tables with clothing, prints, and jewelry for sale before stopping at a tent nestled between the Purple Pub and Tony’s Sombrero, where a lineup of five artists played throughout the afternoon.

The Adithya Vaidhyan Trio, composed of three students from the College, was undeterred by the rain that started as the group took the stage to play five jazz pieces.

Joel Nicholas ’23, Grace Kaercher ’25, and Adithya Vaidhyan ’24, playing the keyboard, trumpet, and saxophone, respectively, formed the group for the purpose of performing at Summer Sundays.

“[Vaidhyan] was looking for a pianist for his trio and I gladly filled in the spot,” Nicholas said in an interview with the Record. “I passed by Summer Sundays last year, and I was shocked I didn’t know it was a thing. So this year I was very happy to have the invitation to get involved.”

Farther down the sidewalk, at the corner of Spring Street and Walden Street, Bennington-based artist Katie Runde created a realist representation of “Woman with a Parrot” by Raimundo de Madrazo y Garreta with chalk.

Runde’s project, which was supported by a grant from the Cultural Council of the Northern Berkshires, was a large-scale temporary rendering of a painting from the permanent collection at The Clark Art Institute.

Runde, who was commissioned to produce this piece at Summer Sundays, said she enjoys creating public art as a way to engage with her background in both oil painting and music. “This is a way to combine the performativity of music with art, and it’s cool for people to see the process, especially early on when it looks schmutzy,” she said. “You can get a sense that these things take time and don’t look perfect right away.”