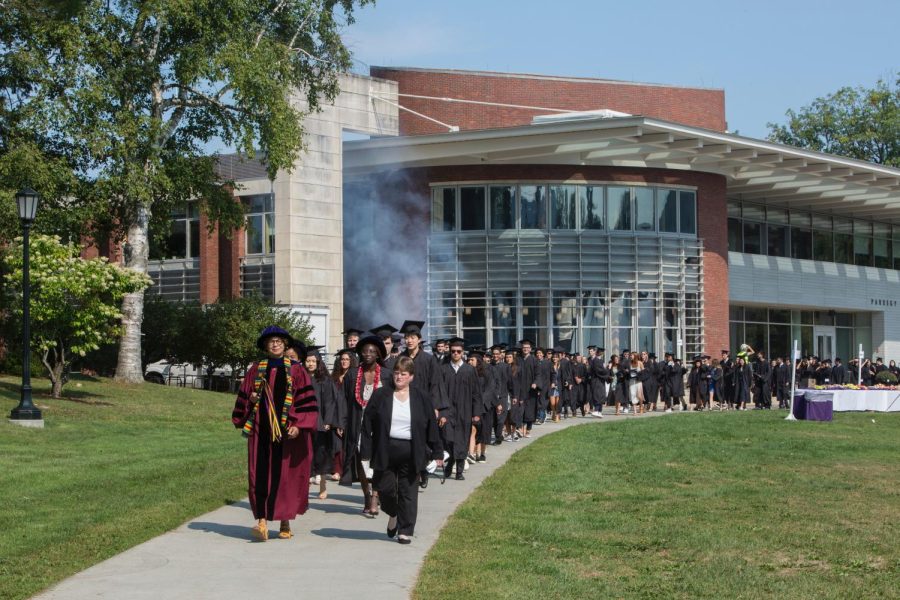 The College held its annual convocation for the Classes of 2023, 2022.5, and graduate students in the final year of their programs on Sept. 10 in Chapin Hall, marking the official start to the 2022-23 school year. During the ceremony, President Maud S. Mandel awarded Bicentennial Medals to six female alums — the first year all of the recipients were women.

Chaplain to the College Rev. Valerie Bailey Fischer began the ceremony, noting that this year’s graduating class is the last one to have experienced life at the College before the COVID-19 pandemic and praising its members for their persistent enthusiasm and eagerness to learn.

Mandel then encouraged the seniors to find time for joy and pursue intellectual opportunities outside of their majors in their final year at the College. “They say education is wasted on the young,” she said. “I really want you to prove them wrong.”

Mandel later presented the Bicentennial Medals — given annually to distinguished alums since 1993, the 200th anniversary of the founding of the College — to Elizabeth Hohmann ’80, Pamela Council ’07, Katherine Krieg Fischer ’08, Anouk Dey ’09, Lina Khan ’10, and Adena Friedman ’91.

“We are celebrating 50 years of women at the College, and we are marking the anniversary of that particular change in a long history of diversifying the College,” Mandel said.

Hohmann, who received the first medal, served as the principal investigator of the National Institute of Health’s trial of remdesivir, the first COVID-19 treatment to receive full FDA approval.

Mandel also praised Council’s artwork, which incorporates sculpture, writing, performance, and architecture. Mandel spoke highly of a sculpture entitled “A Fountain for Survivors,” which Council dedicated to survivors of the pandemic and social upheaval. Fischer and Dey received a joint award for founding Reclaim Childhood, a non-profit organization in Amman, Jordan, that seeks to empower female refugees by providing them with leadership and athletic opportunities.

Mandel then honored Khan, whom President Joe Biden appointed chair of the Federal Trade Commission (FTC); she is the youngest person to have held that role. Under her leadership, the FTC has launched a process to curtail unfair use of consumers’ personal information and sued Facebook, alleging it pursued illegal strategies to curb competition. “Only a year into [her] tenure, [she] demonstrated that [she is] principled, savvy, and determined — in short, a force to be reckoned with,” Mandel said.

After all of the alums received their medals, Friedman, the president and CEO of Nasdaq, gave an address to the class. Mandel honored Friedman in part because of her mission to “expand transparency and promote integrity” as a businesswoman, Mandel said. “[Her mission] also includes a groundbreaking initiative to promote diversity in corporate doors … [She] prioritizes fairness and equality of opportunity.”

In her speech, Friedman asked the seniors to cherish memories both big and small. “Your life will be filled with big moments — treasure them,” she said. “But don’t let those big moments be the only ones you value… It’s in the quieter moments that you make space for a relationship that might change your life, where you learn the skills that will open up your next career opportunity, where you learn the lesson that helps you make a crucial choice.”

Nehemiah Cesar ’23 and Emmanuelle Copeland ’23, the class marshals, also gave remarks. The pair discussed their class’s accomplishments: building on years of activism, its cohort of Junior Advisors (JAs) secured paychecks for residential life leaders; it organized the first affinity housing at the College; and it was the last class to experience College Council before it helped to replace it with a new form of student government.

“If there’s anything that should define our class, it should be our ability to reinvent and restart, both as a community and for ourselves,” Cesar said.

Dean of the College Gretchen Long presented the Grosvenor Cup Award to Priscilla Singleton-Eriyo ’23, engendering a hearty applause. The award is dedicated to “the student who has best demonstrated concern for the College community and beyond through extensive dedicated service and who has served with the utmost integrity and reliability,” Long said.

“[Singleton-Eriyo’s] motivation to make Williams a lively and loving environment is inspiring to all,” Long said. “[She] also brings her smile, her humor, and her compassion to any situation she’s in. Her deep involvement across the whole campus is an example of her dedication to inclusion and to building a vibrant community.”

After musical performances by Chen Chen Huang ’23 and Matt Wisotsky ’23, Long also introduced the 38 members of the Class of 2023 elected to Phi Beta Kappa.

Convocation concluded with a rendition of the College’s alma mater “The Mountains” by Washington Gladden, a member of the Class of 1859, and Catholic Chaplain Bridget E. Power giving a benediction in which she encouraged members of the senior class to remain faithful to their own senses of purpose in their final year at the College and beyond. “Living faithfully may involve letting go of some of the notions of success that you carry with you,” she said. “May you strive to be faithful nonetheless, and may you continue to experience joy.”