One in Two Thousand: Jay Schroeter ’22 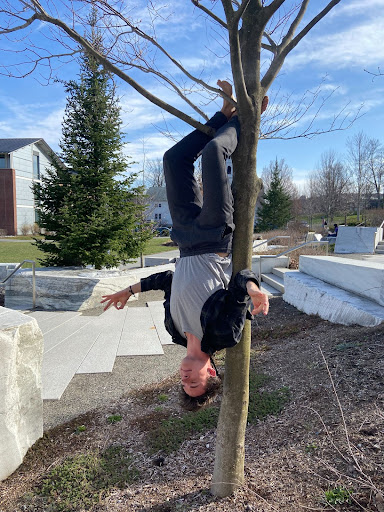 Each week, we randomly select a unix from a list of all current students at the College for our One in Two Thousand feature. As long as the owner of a selected unix is willing to be interviewed and is not a member of the Record board, that person becomes the subject of our interview. This week, the computer (using a script in R) chose Jay Schroeter ’22, who discussed feats of physical prowess, why he became a Junior Advisor (JA), and the benefits of not wearing shoes. This interview has been edited for length and clarity.

Lindsay Wang (LW): We’re walking down to the Hoosic. How’s your day been?

Jay Schroeter (JS): It’s been good. Today, I watched rugby for the first time in my entire life.

JS: Yeah, the non-cis-[male] rugby [team]. It was so fun. It made me want to play rugby. It reminded me of my middle school football days.

LW: Were you good at it?

JS: Um. Well. I was all right because the coach approached me and asked me if I wanted to be on the silver team or on the gold team. Those were the two options.

LW: I imagine the gold team was better.

JS: Yes. I thought about it for a while, and I was like, “I want to play more.” So I got back to him the next day and said that I wanted to be on the silver team. And he put me on the gold team, and I didn’t get to play much. [Laughs.] So [I was] the definition of mediocre.

LW: Just good enough to be on the gold team, but —

JS: Not good enough to play on the gold team.

LW: I’m sure that must have been traumatizing.

JS: No, it was fine. I didn’t like football very much in middle school.

LW: [Laughs.] Did you continue into high school?

JS:. No. I did do cheerleading in high school. So I continued in football in as much as I transferred to the sidelines and put on less protective gear.

LW: What did you enjoy about cheerleading?

JS: Well, I started because I needed a PE credit.

LW: As most physical activity starts.

JS: [Laughs.] But I continued…I don’t know why I continued. I just liked it. I don’t know what was fun about it. The people were fine. They were fun, and — actually, I think one thing that was a factor was ambition. Because there’s a lot of impressive-looking stuff you can do as a cheerleader, whereas for football, you can only get so good at running and hitting people. But for cheer, there’s successively more difficult things that you can do that are totally just different feats. Being able to work towards those and do more and more impressive things was fun. By the time I was a senior, I could throw a small cheerleader up to my hands and then push her over my head by myself.

LW: By yourself? Wow, you’re strong.

LW: Yeah, I mean, I’ve seen you do various feats of physical prowess during your time as a JA. Look at that segue. You were my JA last year. Why did you decide to become a JA?

JS: Why did I decide to be a JA? I don’t know. You know, I got accepted to be a JA, and then I met with one of my JAs, Ruairi OCearuil ’20, and I was like, “Hey, if I rejected the position, somebody is going to move up from the waitlist, and that person will be just as good of a JA as I would be. So why should I be a JA?” And he was like, “That’s just how it rolls, Jay. They chose you on purpose.”

LW: And that convinced you?

JS: Yeah, I think so. That’s now what I say to people whenever they’re in a similar position, where they’re like, “Well, if I don’t do it, somebody else will get it.” I’m like, “No.”

LW: They chose you.

JS: Yeah. They chose you [and] if you do that, then society doesn’t work.

LW: [Laughs.] That’s a lot of pressure to put on one person.

JS: Yeah, maybe. Or, if everybody does that, [then it’s] Immanuel Kant’s universalizability principle.

JS: I have not read that. That was from Crash Course.

JS: I can think of at least two reasons. One of them is that I was a theatre kid in high school. And what do theatre kids have in common?

JS: They love attention. [Laughs.] So that’s one thing, if I’m totally honest. The other thing is that it’s better for your knees. Walking in shoes encourages us to walk heel-toe, which means that your whole heel strikes at once, and it sends up a shock into your leg, whereas if you walk barefoot, it encourages you to walk in such a way that you’re putting a little bit of pressure on the [whole] foot at a time instead of all of your weight on your heel with each step. And if you’re putting a little bit of weight distributed across your whole foot at a time, then it sends less of a shock up your knee and also just encourages me to feel the ground. I can feel how the consistency of this ground is different from the ground on campus as we speak. It’s more silty.

LW: That makes sense. I mean, we’re near a river and all.

JS: Yeah. I’m no geoscience guy, but my feet are geos guys.

LW: [Laughs.] How do you feel about this being your last year on campus?

JS: I try to think about how I feel about it a lot, and I don’t actually think that I feel much about it most of the time. At sad boi hours, I get nostalgic prematurely, and during stress or annoyed hours, I feel excited. [Laughs.] But I would say that the order of prominence of those states is not really feeling much of anything about it and then feeling prematurely nostalgic about it and then feeling annoyed and excited. In that order.

JS: My regrets and advice are the same.

LW: That makes sense, actually. [Laughs.] It seems redundant when I think about it.

JS: No, no. I think that they could be separate because some people don’t believe in regrets.

So if I wanted to spend more time doing all of those things and countless other things, then I [would have needed to] reduce my time spent [on] other things, so at least some of that time could have gotten transferred to something better. The only time that I’m certain was mostly a waste was time that I spent on Instagram. I don’t know what I would have allotted a lot of that excess time over to, but probably some mix of those three or some other unproductive activity that I’m just not thinking about in this moment. YouTube. [Laughs.] I don’t regret YouTube as much as I regret Instagram and Twitter. But I do regret it a little bit.

LW: All right. And no advice? Or is that your advice? Allot time better?