The Williams Record • May 4, 2022 • https://williamsrecord.com/460910/arts/wcma-displays-purchased-artworks-requested-by-students-in-acquiring-art-for-the-wcma-course/ 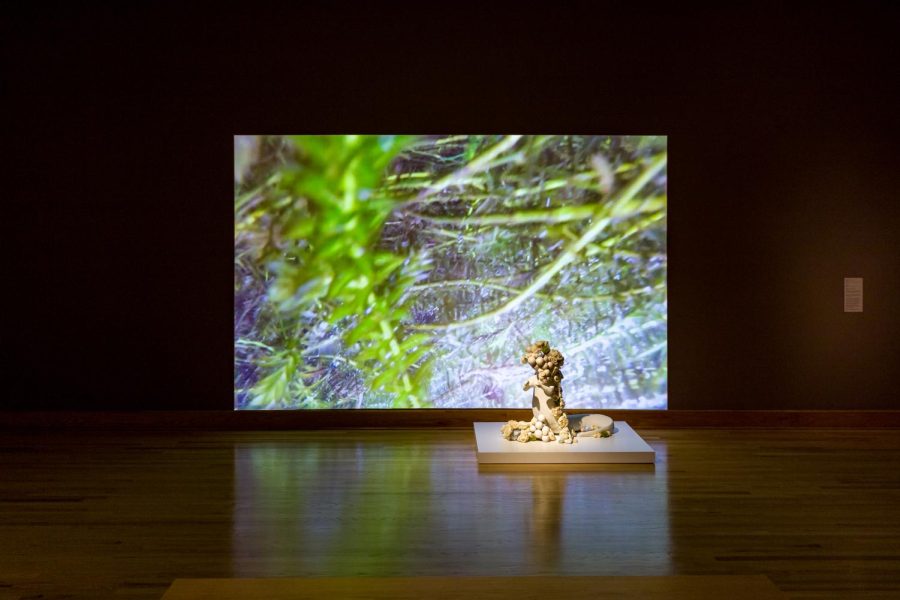 My most recent visit to the Williams College Museum of Art (WCMA) was different from the many I had made in the past. I walked up the stairs that I so often climb, past the Sol LeWitt work on the wall, straight to the Prendergast Galleries on the upper floor. I was rushing to see Allison Janae Hamilton’s Wacissa and Alligator Creature, installed as part of the Remixing the Hall exhibition.

I first encountered these works last fall while scrolling through my phone looking for artwork to purchase. Don’t get me wrong — I have nowhere near the amount of money I’d need to purchase these artworks. I was doing research for my class “Acquiring Art for the WCMA,” a biennial course that started in the fall of 2015, taught by Professor of Economics Stephen Sheppard and Senior Curator of American and European Art Kevin Murphy.

Along with a few other students, I researched artworks that “align[ed] with the museum’s collecting priorities and [had] a predicted monetary value greater than their asking price,” as the wall text at WCMA explains. After writing a 20-page acquisition proposal, delivering a presentation to WCMA staff, and visiting galleries in New York to negotiate prices for the work, I was beyond excited when I learned that the two pieces my classmates and I persuaded the College Museum to purchase were installed in the upstairs galleries.

Seeing the two works in person did not disappoint. As my group had suggested in our acquisition proposal, the two works were displayed together. While the artworks were not created to accompany each other, we thought juxtaposing the two would allow viewers to enhance their engagement with the works’ themes like Black history in the American South or environmentalism.

Alligator Creature is a sculpture of what seems like a “mythical alligator,” made of taxidermy foam adorned with pastel-colored flowers and grapes. It references the conceptualization of the American South as an Edenic paradise but simultaneously challenges this imagination by pointing out the history of the enslavement of Black and Indigenous people or disproportionate damages of climate disaster.

Wacissa is the perfect backdrop for this neo-mythical creature. The 22-minute single-channel video chronicles Hamilton kayaking through the Wacissa River’s Slave Canal in the Florida Panhandle, named after the extensive usage of slave labor to construct these canals in the 1850s. Hamilton’s camera drags the viewer across the riverbed in an enchanting yet haunting journey, occasionally bobbing up to the surface to let the audience breathe. Thinking about the history of the American South and how it still shapes and transforms individuals’ lived experiences to this day — hurricanes in 2018 have devastated ecosystems of Florida, leaving debris along the canal Hamilton travels through — is particularly imperative at Williams College, a privileged and secluded ivory tower in New England. Living miles away from these historic vicissitudes often renders us numb and disinterested; engaging with Hamilton’s objects, the viewers would hopefully be pulled out of their purple bubble to think about issues beyond Williamstown.

I also had a lovely time exploring the other artworks that my classmates had successfully pitched through the course. Guadalupe Maravilla’s Disease Thrower #10 was displayed in a room along with other new acquisitions. Seeing the intricate mixed-media sculpture command the room with its monumental scale was a truly powerful experience. I recalled the presentation I attended where I was told how Maravilla’s Disease Throwers are intended to be “activated” through performance — a sound bath performance that the artist was exposed to during his sound therapy when he was battling colon cancer. Through a performance that involves sounds produced by the gong in the center and other elements of the sculpture, Maravilla intends to “throw disease out of the body through its healing properties and auditory activation, healing both the viewer and the performer,” as the wall text states.

Advancing Impulses by Mildred Thompson is also displayed on the second floor. I was immediately struck by the bold colors and lines as I walked into the room. Thompson was a pioneering Black queer artist who worked across mediums such as painting, printmaking, music, sculpture, and photography. Having Thompson’s artwork in this gallery alongside Cherokee artist Kay Walkingstick’s Sun Dance and Black artist Thomas Sills’ Summer — both purchased through the Acquiring Art course — leaves a lot of questions about the College’s institutional legacy for the viewer to ponder. Williams College stands on the ancestral homelands of the Stockbridge-Munsee Mohicans. It has been less than 150 years since the College accepted its first Black student in 1885 and only a bit more than five decades since the first class of women began studying at the College in 1970. The artworks implore the audience to face the College’s legacy — all its shortcomings and its improvements.

Many other artworks from previous generations of the class’ purchasing projects are displayed throughout the museum as well. Notwithstanding the two aforementioned works, Torkwase Dyson’s In the Middle of the Ocean (Water Table) is in the same room as Hamilton’s works, while the exhibition Acquiring Art: Selecting and Purchasing Art for the WCMA in the lower floor shows five other artworks.

I suggest you visit WCMA to look for these artworks and ponder them, thinking about why students of past years thought it was imperative to purchase them. Each artwork tells a unique story of what the students expected from the College and its museum and to where they hoped they would progress.